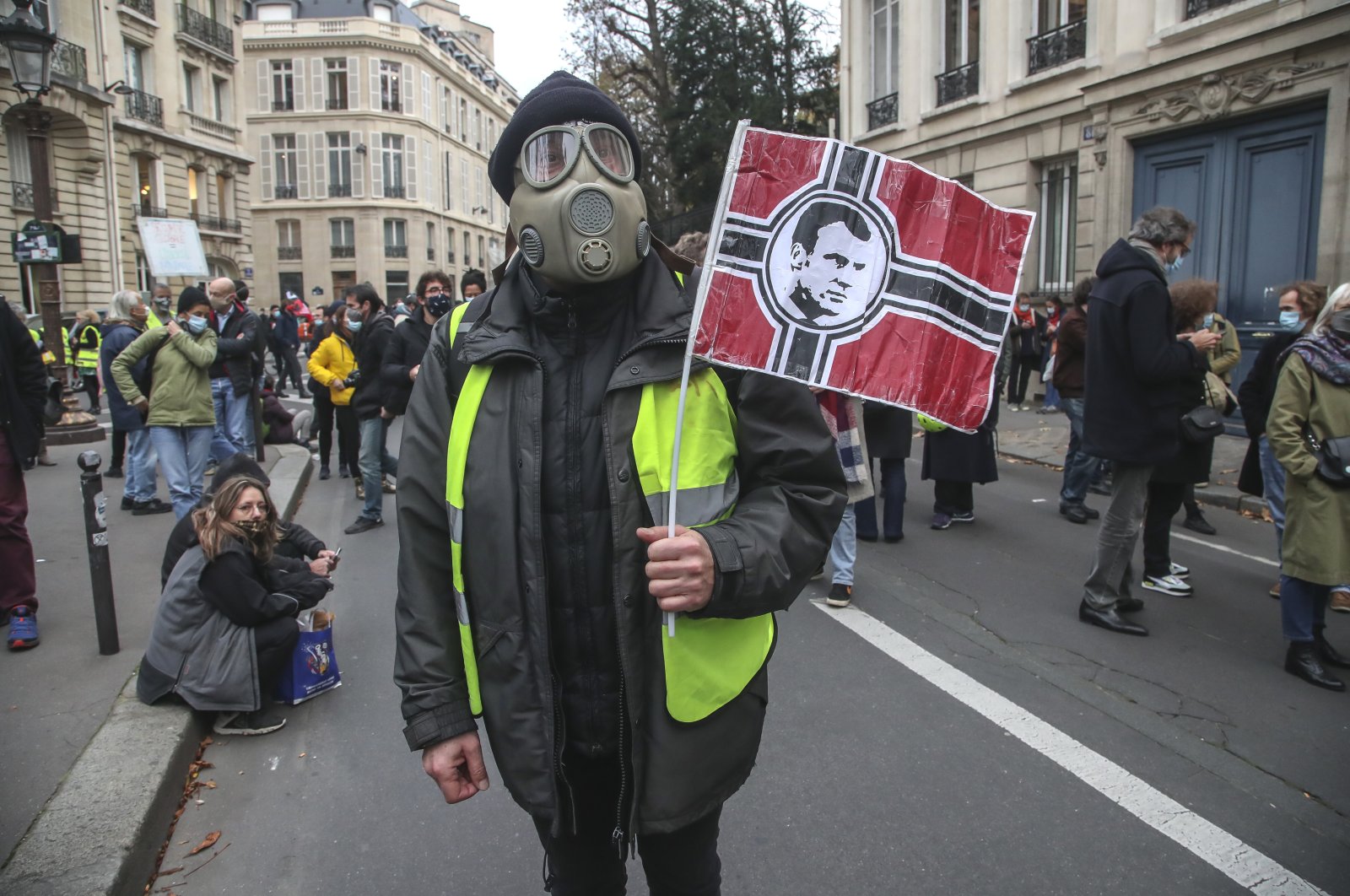 A demonstrator wearing a gas mask holds a banner representing the Nazi flag with the portrait of French President Emmanuel Macron on it during a protest by the National Assembly against the security bill in Paris, Nov. 17, 2020. (AP Photo)
by Anadolu Agency Dec 19, 2020 12:36 pm
RECOMMENDED

France and Austria are "aggressively moving towards right-wing politics," political observers noted at a conference that concluded on Friday night.

"The states are more and more not becoming democratic," said John Esposito, of U.S.-based Georgetown University, while addressing a conference on Governance and Political Authority in the Muslim World, hosted by the Istanbul-based Center for Islam and Global Affairs (CIGA).

"(President Emmanuel) Macron is moving to the right because he has 38% approval rate and he knows (right-wing politics) is very strong in France and he is trying to co-opt them by moving against the Muslim community in the country," said Esposito referring to recent incidents in France.

Discussing authoritarian states in the Middle East, scholar Abdullah al-Arian said Egypt's military dictator of Abdel-Fattah el-Sissi has not followed even the "most basic rules of establishing a stable authoritarian regime."

"He has not even consolidated the oligarch class ... he has alienated many of them. He has not consolidated control over the military and has just appointed many from his family members to the point that there are reports of disaffection within the military," said Al-Arian, who teaches at the Georgetown University campus in Qatar.

"El-Sissi has relied much on sheer force and this is a classic (example) of a weak authoritarian state is where one needs violence," he said.

"One of the realities in the Middle East is that there is no nation-state ... (The United Arab Emirates) UAE and Saudi Arabia are family-owned countries," said the American professor.

"It would take quite a few years before we could see a significant change in the Middle East," he said.

Al-Arian maintained there will be "an opening to explore the possibility of a democratic alternative" in the authoritarian countries.

"There is disenchantment," the Qatar-based academic replied when asked about the failure of democracy in the Middle East.

"We have not seen the fruits as they were promised," he said referring to the failure of the Arab Spring.

Ismail Yaylaç, who teaches at Istanbul-based Fatih Sultan Mehmet University, said the fate of authoritarian regimes in the Middle East is hanging in the balance at a time when their oil revenue has started declining.

Iran-based academic Hamed Mousavi told the conference that one of the "negative consequences" of the Arab Spring has been the complete breakdown of relations between primary countries in the Muslim world such as Turkey and Syria, Iran and Saudi Arabia or Turkey and the UAE.

"Divisions in the Middle East has allowed the intervention of China and Russia, and the only beneficiary is Israel," he argued.

"Nation-state and democracy can evolve when there is a breathing space but the main issue here is of foreign involvement, intervention and foreign pressure," said Mousavi, who teaches at the University of Tehran.

Sami al-Arian, director of CIGA, said the seven-day long virtual conference brought together 58 scholars from 22 countries discussing "governance and political authority in the Muslim world" for over 30 long hours.