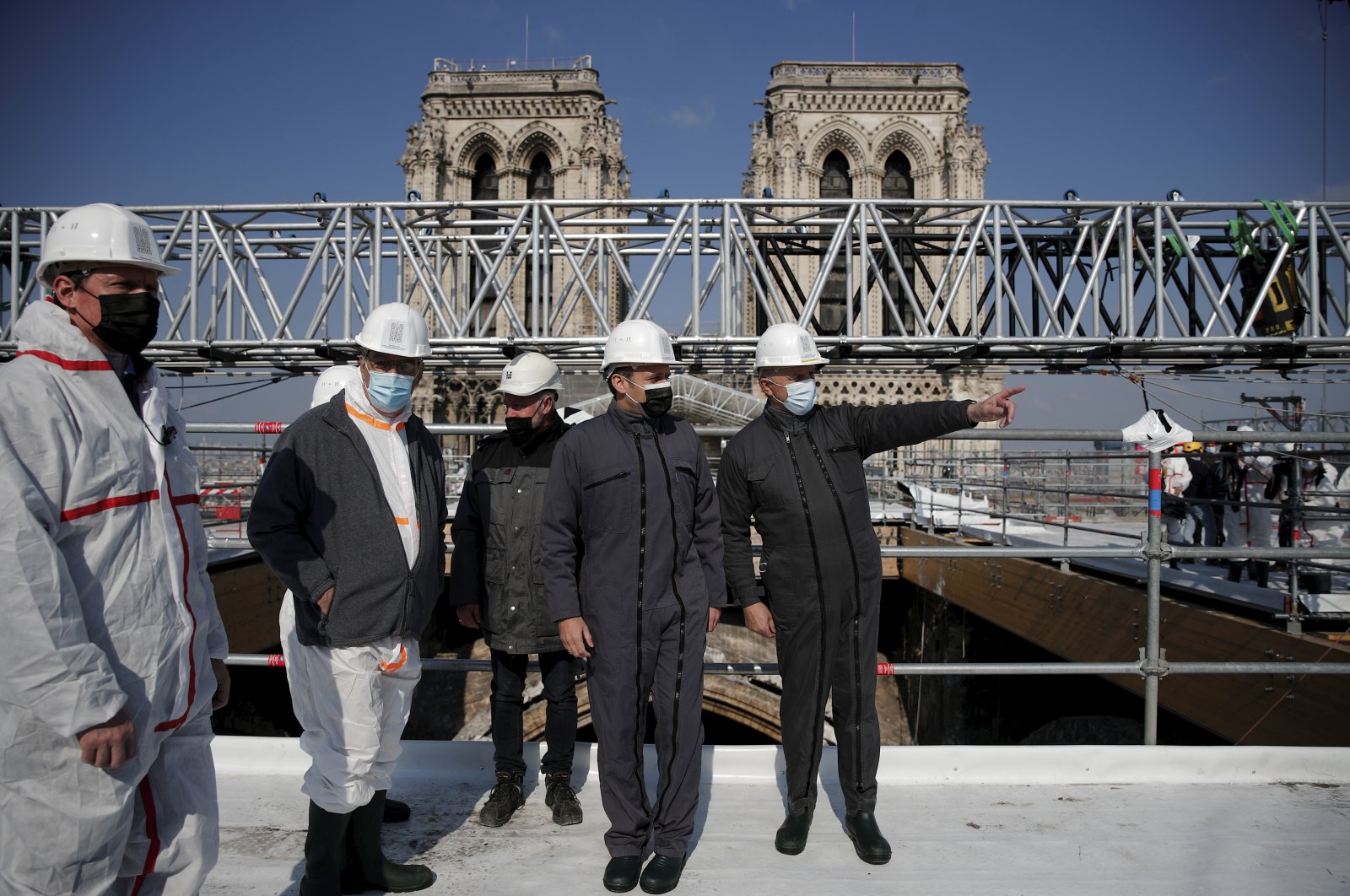 Flanked by ministers, architects and the retired French army general who is overseeing the restoration of the 12th century monument, Macron plans to inspect the progress of the ambitious rebuilding project to give the pandemic-weary French public some hope that a completion date will arrive one day, if not in the near future.

Macron promised the cathedral would be rebuilt by 2024, yet officials acknowledge the work would not be fully completed by then. They cite factors such as the COVID-19 pandemic for having slowed down the pace. The blaze also distributed vast amounts of toxic lead onto Notre Dame and the surrounding area, complicating the clean-up work that came before restoration efforts could even begin.

“The 2024 deadline will be met,” French newspaper Le Parisien quoted the French leader as saying in an article, published Thursday morning. “The five years will be met. What is important to me, really, is that the planning of the work can be respected, with all respect to architects and craft professionals.”

Cranes and scaffolding from the massive project scar the French capital's skyline and the rebuilding work could take decades. Officials said earlier this month that the burned-out cathedral and its esplanade could remain under construction for another 15 or 20 years. However, they pledge Notre Dame will at least be open for prayer and a “return to worship” in time for the 2024 Summer Olympics, which Paris is hosting.

“The objective ... is to return Notre Dame to worshippers and to visits in 2024. That means that in 2024 Mass will be able to be organized in the cathedral,” Jeremie Patrier-Leitus, a spokesperson for the restoration, told The Associated Press.

Patrier-Leitus wants the world to know that “Notre Dame is holding up. It is still there. We are all gathered and mobilized to restore the cathedral and give this jewel of French Gothic architecture back to the world.”

It remains to be seen if the cathedral will be in shape by then to welcome the 20 million tourists it received each year before the fire.

Since 2019, religious ceremonies have taken place at Notre Dame’s temporary liturgical base at the nearby church of Saint-Germain l’Auxerrois. The church lacks the size and wow-factor that drew the faithful to the cathedral for nearly 900 years.

The Elysee presidential palace said Macron’s visit "will be an opportunity for the head of state to thank again all those who helped save the cathedral from the flames” and after. That includes the carpenters, scaffolders, rope access technicians, crane operators, organ builders, master glassmakers, painting and sculpture restorers, stonemasons, archaeologists, researchers and donors who helped keep the restoration work going despite the difficulties posed by the current health crisis.

Two years is a blink of an eye in a restoration timeline – the Notre Dame project is still in the initial consolidation phase. The actual restoration phase is expected to start next winter. But the overwhelming feeling among those who love Notre Dame is the relief that the project so far has been a success.

“I can say today that the cathedral is saved. It is well secured and we can now do the huge work of reconstruction that is not going to destabilize the whole building,” Notre Dame's rector, Patrick Chauvet, told the AP.

The consolidation phase costing 165 million euros ($197 million) was vital – 40,000 metal tubes from the scaffolding that was in place at the time of the fire melted during the blaze and had to be patiently cut off the roof. The vaults inside the cathedral also had to be stabilized. In a sign of the work to come, though, 1,000 oak trees were felled in some 200 French forests this spring to make the frame for the cathedral’s transept and spire – destined to be admired on the Paris skyline for potentially hundreds of years

The drama of the eventful night of April 15, 2019, may well be 24 months in the past, but for Parisian witnesses, it still feels very fresh. Frederico Benani, who witnessed and filmed the burning cathedral, was tearful as he recounted the experience.

“I was here with my wife having tea. I saw a little black flame, and I never thought it was the Notre Dame that was burning, and it was shocking for me to see all of those flames," Benani said. "It was horrible. It was sad. It breaks my heart.”