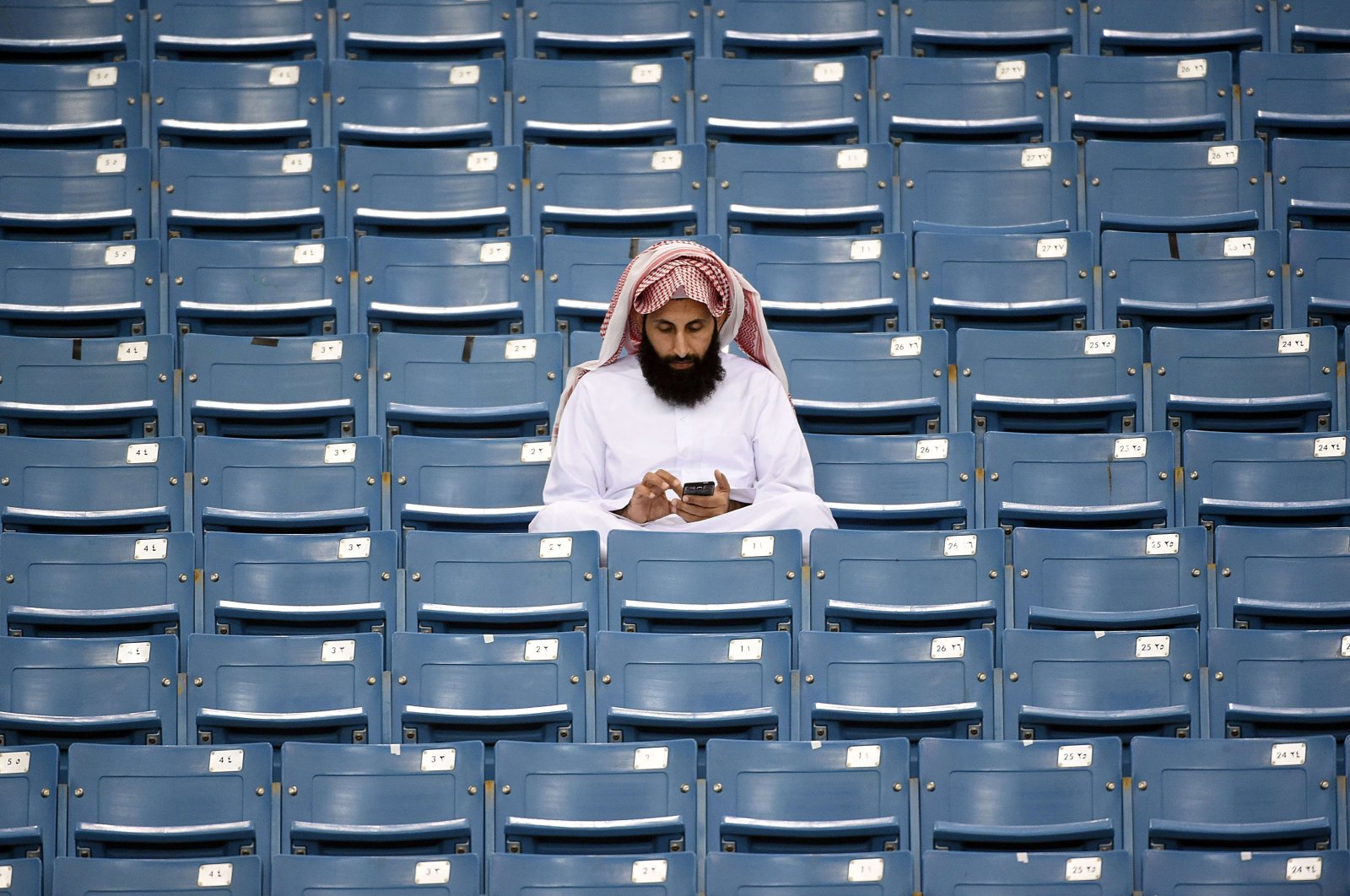 A Saudi Arabian fan checks his mobile phone before the final of the 22nd Gulf Cup of Nations football match against Saudi Arabia at the King Fahad stadium in Riyadh, Saudi Arabia, Nov. 26, 2014. (AFP Photo)
by Agencies Jan 15, 2021 5:09 pm
RECOMMENDED

Another popular Muslim prayer smartphone application is tracking the location of its users and selling the data, which is ending up in the hands of the U.S. government, a media report says.

Salaat First, an app that reminds Muslims when to pray, is recording and selling the location data of its users, according to Motherboard, an online magazine owned by American-Canadian Vice Media group.

The company collecting the location data is a French firm called Predicio, which has been linked to a supply chain of data involving a U.S. government contractor that has worked with a number of American agencies, as Anadolu Agency (AA) reported.

Some of the agencies the contractor has worked with included Customs and Border Protection (CBP), the U.S. Department of Homeland Security's (DHS) largest federal law enforcement agency, Immigration and Customs Enforcement (ICE) and the Federal Bureau of Investigation (FBI).

Salaat First, which has been downloaded more than 10 million times on Android, can potentially track its users' locations including places of worship.

Last November, the Motherboard investigation found that the U.S. Special Operations Command (SOCOM), a branch of the military focused on counterterrorism, was obtaining location data from several companies.

The most popular among those targeted was a Muslim prayer and Quran app called Muslim Pro, which gives users precise prayer times and shows the direction of the Holy Kaaba in Saudi Arabia's Mecca. The app has been downloaded over 98 million times worldwide.

Among other apps was one for Muslim dating and another for following storms, Anadolu Agency (AA) reported.

Many of the app users involved in the data supply chain are Muslim. The issue is viewed as a continuation of the decades-old U.S. policy in predominantly Muslim countries such as Afghanistan and Iraq.

SOCOM's spokesperson confirmed the news report, saying the data was bought to assist its overseas operations.

“Our access to the software is used to support Special Operations Forces mission requirements overseas,” U.S. Navy Commander Tim Hawkins was quoted as saying. “We strictly adhere to established procedures and policies for protecting the privacy, civil liberties, constitutional and legal rights of American citizens.”

One of the companies selling location data, X-Mode, said 25 million devices in the U.S. are tracked monthly, while about 40 million are being traced elsewhere, including the European Union, Latin America and the Asia-Pacific region.

The Motherboard investigation claimed that users of the Muslim Mingle dating app had been tracked and that the app repeatedly sent exact geolocation coordinates along with the name of the WiFi network to X-Mode. According to the report, a step-counter app called Accupedo, the weather app Global Storms and CPlus for Craigslist were also involved in selling private information to SOCOM.

U.S. Senator Ron Wyden told Motherboard that X-Mode also admitted selling data it collected to other “U.S. military customers," according to Qatar-based Al Jazeera, while the company defended the practice.

“X-Mode licenses its data panel to a small number of technology companies that may work with government military services, but our work with such contractors is international and primarily focused on three use cases: counterterrorism, cybersecurity and predicting future COVID-19 hotspots,” X-Mode told Motherboard.