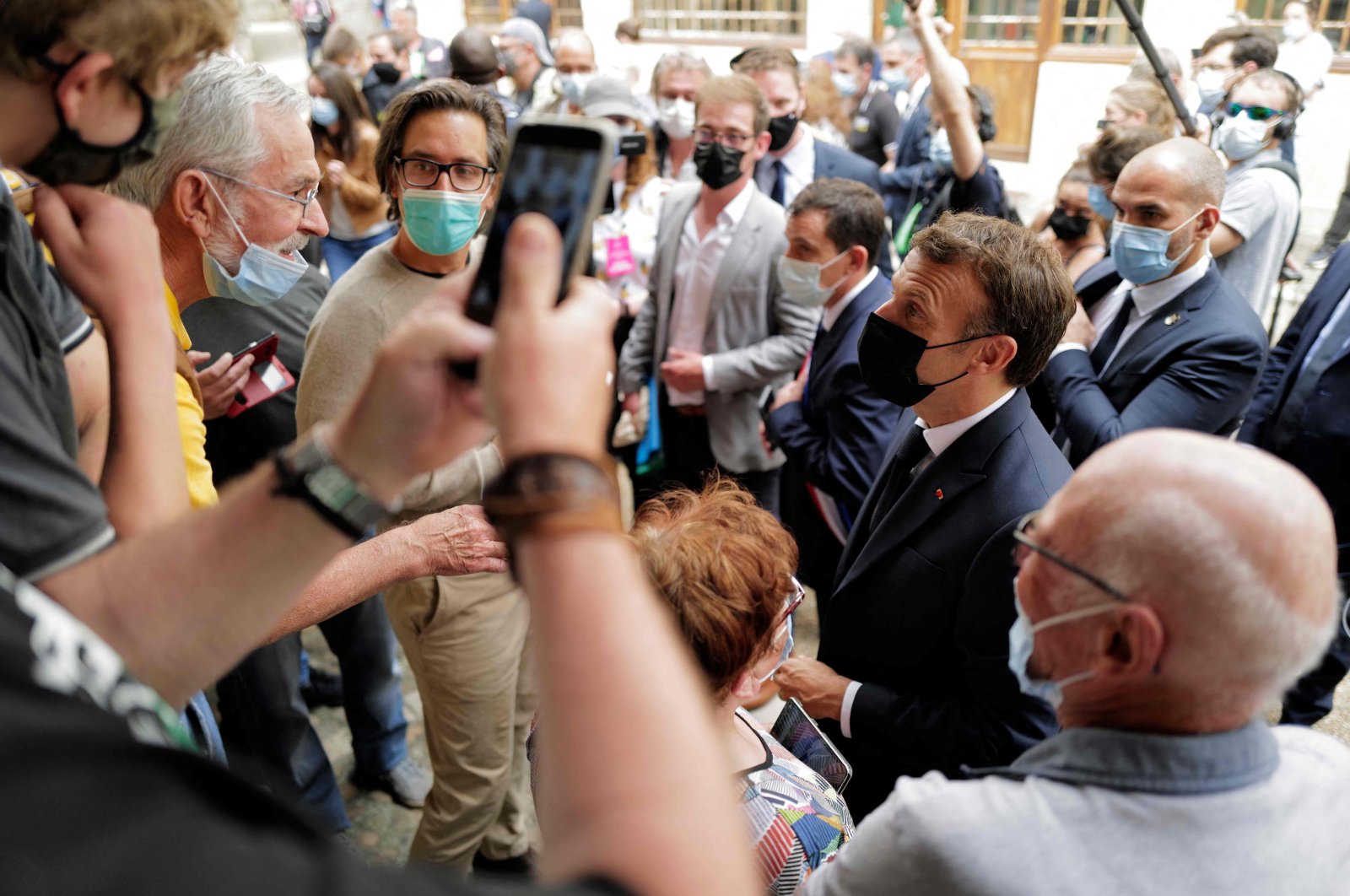 French President Emmanuel Macron was slapped in the face on Tuesday by a man in a crowd of onlookers while on a walkabout in southern France, video of the incident showed.

Macron's security entourage quickly intervened to pull the man to the ground and move Macron away from him. Two people were arrested in connection with the incident, broadcasters BFM TV and RMC radio reported.

The incident took place while Macron was on a visit to the Drome region in south-eastern France, where he met restaurateurs and students to talk about how life is returning to normal after the COVID-19 epidemic.

VIDEO – French President Emmanuel Macron gets slapped by a man as he approached him to shake his hand during a trip in southeast Francepic.twitter.com/UNSTWHkORE

In video circulating on social media, Macron could be seen walking towards a crowd of well-wishers who were behind a metal barrier.

The French president reached out his hand to greet one man in a green T-Shirt with glasses and a face mask.

The man could be heard shouting out "Down with Macronia" ("A Bas La Macronie") and then he delivered a slap to Macron's face.

Two of Macron's security detail tackled the man in the green T-shirt, while another ushered Macron away. But Macron remained in the vicinity of the crowd for a few more seconds and appeared to be talking to someone on the other side of the barriers.

"The man who tried to slap the president and another individual are currently being questioned by the gendarmerie," the regional prefecture said in a statement.

The incident in the village of Tain-l'Hermitage represents a serious security breach and overshadows the start of Macron's tour, which he said was designed to "take the country's pulse."

"Around 1:15 pm (1115 GMT), the president got back into his car after visiting a high school and came back out because onlookers were calling out to him," the prefecture said, according to remarks carried by Agence France-Presse (AFP). "He went to meet them and that's where the incident happened," it added.

The centrist is widely expected to seek re-election in next year's presidential elections and polls show him with a narrow lead over far-right leader Marine Le Pen. Around a dozen stops had been planned over the next two months, with Macron keen to meet voters in person after more than a year of crisis management linked to the COVID-19 pandemic.

Shortly before being slapped, Macron had been asked to comment on recent remarks from far-left leader Jean-Luc Melenchon who suggested over the weekend that next year's election would be manipulated.

"Democratic life needs calm and respect, from everyone, politicians as well as citizens," Macron said.

In July last year, Macron and his wife Brigitte were verbally abused by a group of protesters while taking an impromptu walk through the Tuileries gardens in central Paris.

A 2018 trip to mark the centenary of the end of World War I is best remembered for the scenes of furious citizens booing and heckling France's youngest post-war leader. It took place just as "yellow vest" protests were gathering momentum to denounce the government's policies and the head of state personally for his leadership style, which was criticized as aloof and arrogant. Macron conducted another tour billed as a listening exercise in 2019.