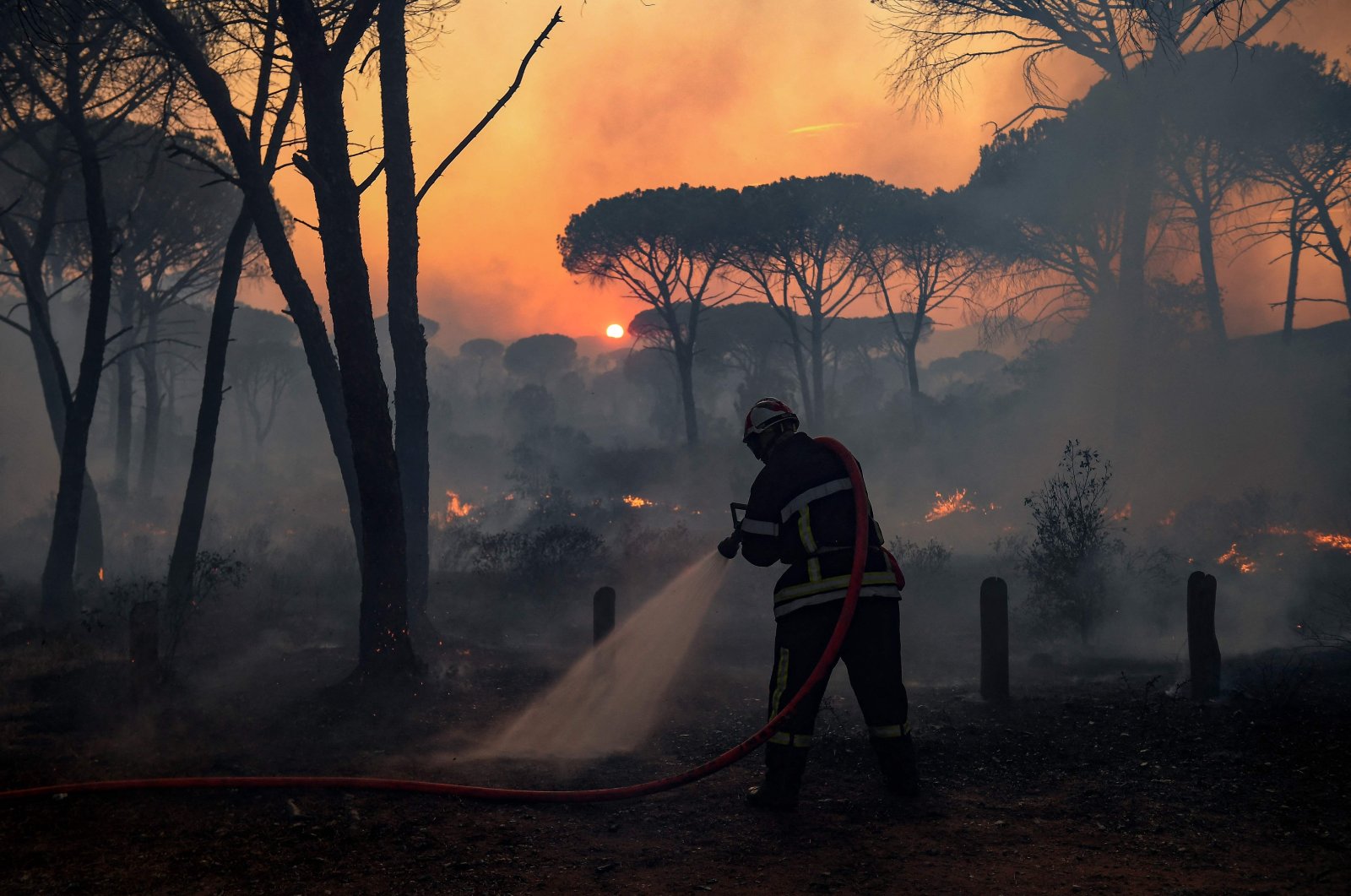 A French firefighter uses a water hose as light from the setting sun is filtered through smoke during a forest wildfire, near Gonfaron, in Var Prefecture, southern France, Aug. 17, 2021. (AFP Photo)
by French Press Agency - AFP Aug 18, 2021 10:30 am
RECOMMENDED

Hundreds of French firefighters continue to battle the country's worst wildfire on its third day at the glitzy Riviera resort of Saint-Tropez, forcing thousands of residents and tourists to flee.

The blaze has scorched some 5,000 hectares in a region known for its forests, vineyards and fauna since it broke out in the Plaine des Maures nature reserve on Monday evening.

The fire "had not spread" during the night but "that does not mean it is under control," Franck Graciano, the fire service spokesperson for the Var region, said.

"We will carry out the same basic work like yesterday by dropping water on the critical places," he said.

Some 1,200 firefighters were deployed, using high-pressure hoses and water-bombing planes and helicopters to control the flames.

High temperatures and strong winds forced local authorities to evacuate around 7,000 people from homes and campsites, officials from Var Prefecture said Tuesday, many to the safety of municipal buildings and schools.

Among them were 1,300 people staying at a campsite in the village of Bormes-les-Mimosas down the coast from Saint-Tropez.

Others fled the village of La-Garde-Freinet, but there were no new evacuations overnight, the fire service said Wednesday.

"We started smelling the smoke around 7 p.m., then we saw the flames on the hill," said Cindy Thinesse, who fled a campsite near Cavalaire Monday evening.

"We hesitated, but when we saw that, we decided to leave," she told Agence France-Presse (AFP).

"The coming hours will be absolutely decisive" for the firefighting effort, President Emmanuel Macron, who has been taking his summer break on the Mediterranean coast, said during a visit to first responders Tuesday evening.

While Macron added that "the battle is ongoing and the fire has not yet been contained, stabilized," he said that the firefighters' courage had managed to "avoid the worst" with no casualties so far.

The Mediterranean basin has long faced seasonal wildfires linked to its dry and hot weather in the summer, but climate scientists warn they will become increasingly common because of human-made global warming.

The French fire is believed to have started near a motorway stop some 30 kilometers (18 miles) northwest of Saint-Tropez.

"We've never seen it spread with such speed, it was three or four times the usual," Thomas Dombry, mayor of La Garde-Freinet village, told AFP.

Authorities were counting the cost to the environment even as the fires still raged Tuesday.

"Half of the Plain des Maures nature reserve has been devastated," Concha Agero, deputy director of the French Office of Biodiversity, said Tuesday.

Charred power lines lay on the ground Tuesday, and many trees were burnt around their trunks but their branches were intact, suggesting the fire had ripped through at speed.

But after a calm night on Tuesday, technicians Wednesday began trying to restore phone and electricity lines.