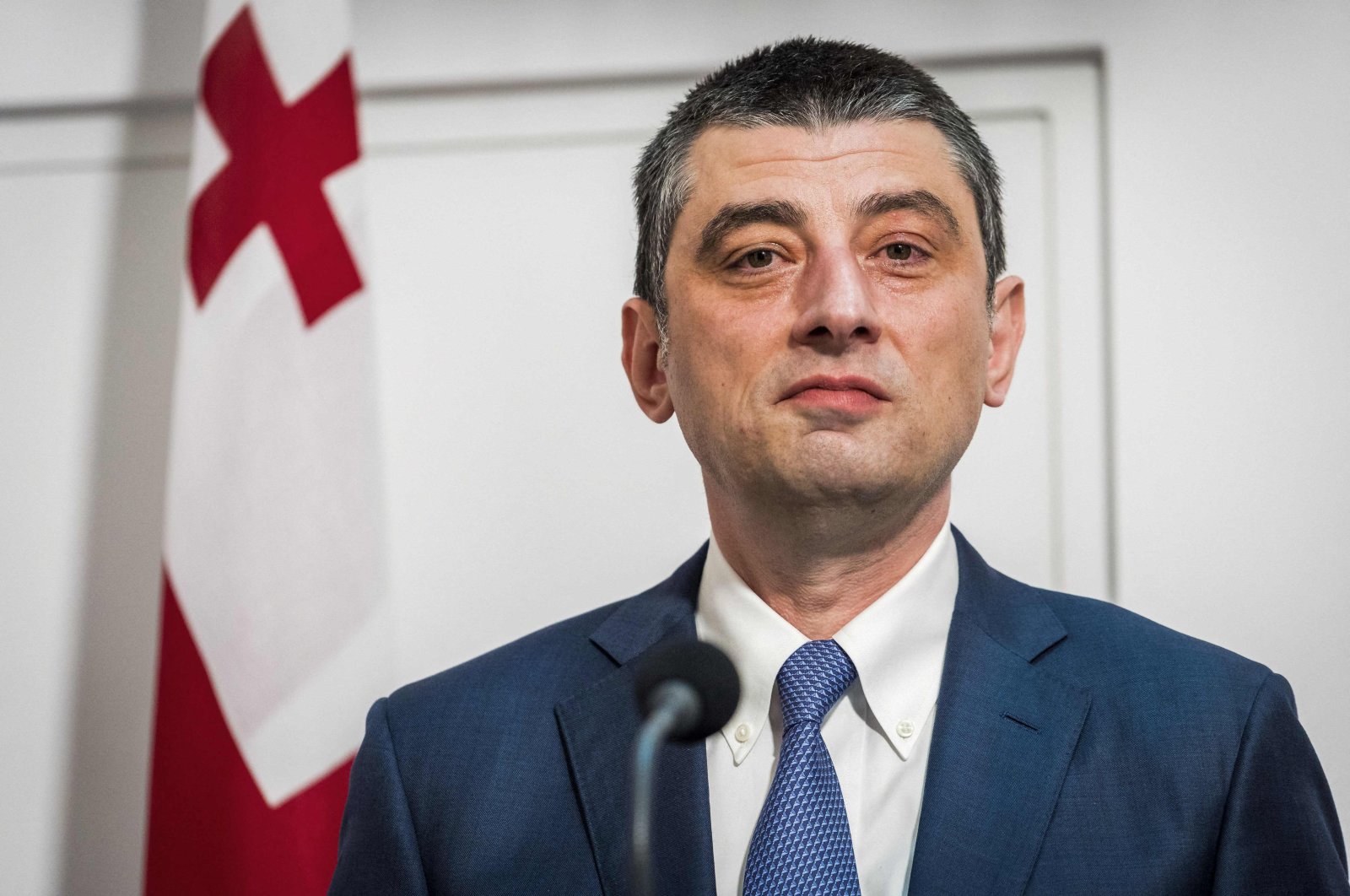 Georgia's Prime Minister Giorgi Gakharia attends a press conference at the Catshuis prior to a bilateral meeting and a working dinner, in The Hague, Netherlands, Nov. 4, 2019. (AFP Photo)
by Agencies Feb 18, 2021 10:06 am
RECOMMENDED

Georgia's prime minister resigned on Thursday over plans to arrest a top opposition leader, saying it risked escalating a political crisis in the ex-Soviet nation.

Giorgi Gakharia, a 45-year-old with the ruling Georgian Dream party who was prime minister since 2019, said in a televised address that he was stepping down because of disagreements in the government over enforcing the court order to arrest opposition leader Nika Melia.

"Unfortunately, I could not reach a consensus with my team on this issue. I decided to resign,” the prime minister said, according to remarks carried by The Associated Press (AP).

"It is inadmissible to enforce a judiciary decision ... if that poses a risk to the health and lives of our citizens or creates the possibility of a political escalation in the country."

A Tbilisi court on Wednesday ruled to place Melia, who is accused of organizing "mass violence” during anti-government protests in 2019, in pretrial detention after he refused to pay an increased bail fee of $12,000. If convicted, Melia faces nine years in prison. He has rejected the charges as politically motivated. Melia and his supporters from other opposition parties have vowed to resist the arrest, and he denounced the ruling as "unlawful.”

The move to arrest Melia – chairperson of the country's main opposition force, the United National Movement (UNM) – raised the stakes in a political crisis that has gripped Georgia since parliamentary elections in October. The opposition denounced the polls as rigged after the ruling Georgian Dream party claimed victory.

The leaders of nearly all of the country's opposition parties gathered Wednesday at the UNM party headquarters in the capital Tbilisi ahead of the trial, vowing to obstruct police if they moved to arrest Melia. According to the Interfax news agency, Melia remained in the Tbilisi headquarters of the UNM on Thursday, and police officers were unable to enter the office to apprehend him.

Following Gakharia’s announcement, Georgia's Interior Ministry issued a statement saying they have temporarily postponed detaining Melia. Melia said Gakharia's decision was "to be respected” but was unlikely to defuse political tensions in the country and called for an early parliamentary election.

Melia told journalists Thursday that the opposition was ready for talks on a snap vote.

"Power will change in Georgia peacefully and very soon," he said.

The ruling party's chairperson, Irakli Kobakhidze, said its leadership would decide by Friday on a candidate to take over as prime minister, adding that he "regretted" Gakharia's decision.

"I urge Melia to obey the court decision. Otherwise, the government will enforce the judiciary decision and arrest him," he told a news conference, as reported by Agence France-Presse (AFP).

Melia is accused of fomenting violence during protests that erupted in Tbilisi in June 2019 after a Russian lawmaker addressed parliament from the speaker's seat, a controversial move in a country where ties with Moscow remain strained after a brief war in 2008. The rallies saw thousands of protesters clash with police who used tear gas and rubber bullets against the crowds.

Georgia gained its independence with the 1992 collapse of the Soviet Union and in the decades since has been divided between its longstanding relationship with Moscow and efforts to seek closer ties with the West.

In a statement ahead of the trial, the European Union envoy to Georgia, Carl Hartzell, described the circumstances surrounding Melia's prosecution as a "dangerous trajectory for Georgia and for Georgian democracy."

The U.S. Embassy in Tbilisi said on Twitter that the crisis "must be resolved peacefully," urging both the government and the opposition to show restraint.

"The current dangerous situation following the Melia ruling stems from decadeslong problems with the electoral system and the judicial system," it said.

In power since 2012, Georgian Dream has seen its popularity fall over its failure to address economic stagnation and perceived backsliding on commitments to democracy. Critics accuse Georgia's richest man Bidzina Ivanishvili – the founder of Georgian Dream who is widely seen to be calling the shots in the country – of persecuting opponents and fostering corruption.