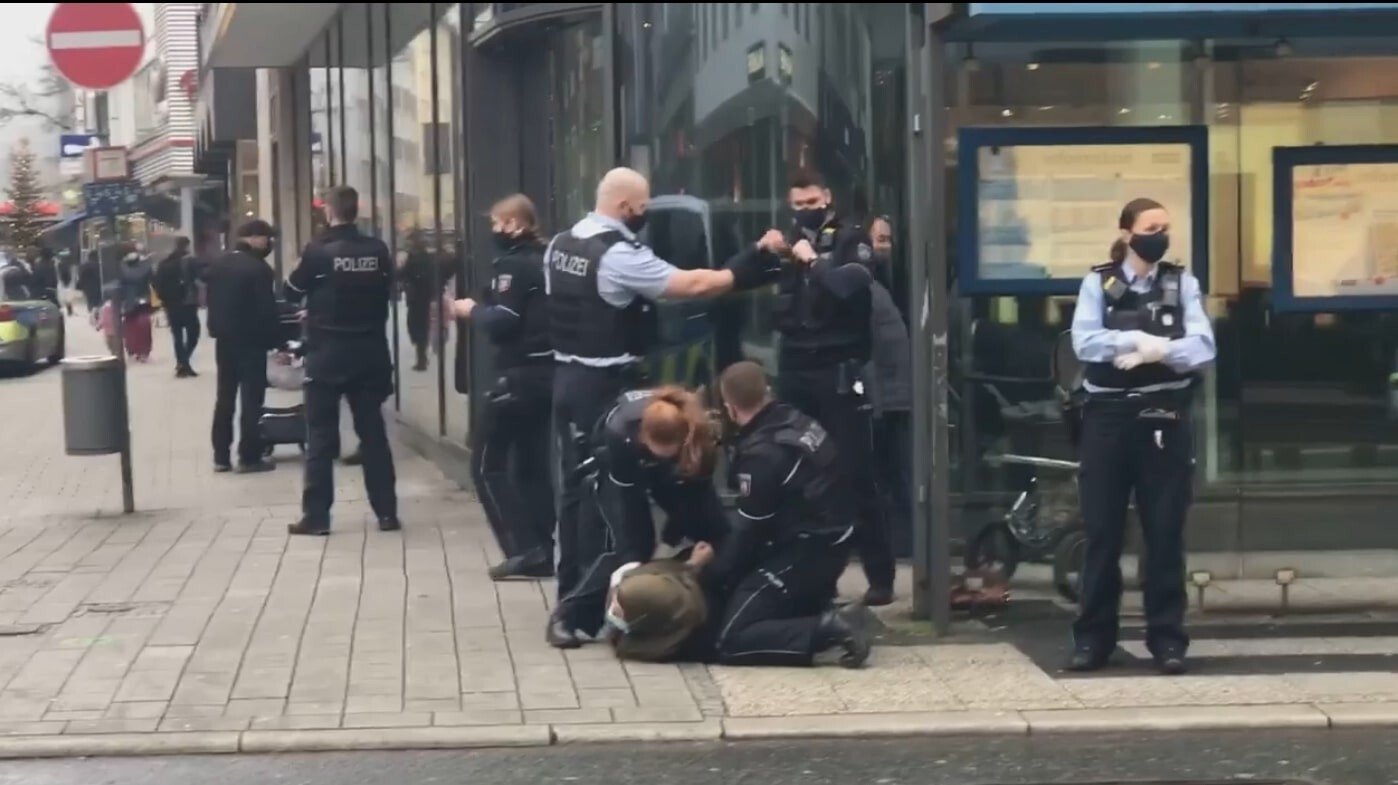 This screengrab from a footage captured by a bystander shows police officers violently arresting a Muslim woman in front of her toddler for not wearing mask in Wuppertal, Germany. (IHA Photo)
by Agencies Dec 25, 2020 11:52 am
RECOMMENDED

Footage showing a German police officer in a Western city handcuffing a Muslim woman wearing a headscarf in front of her toddler and putting her on the ground for not wearing a mask sparked new concerns over radicalized police brutality against minorities and growing Islamophobia.

According to the footage taken by eyewitnesses in the city of Wuppertal, there were seven police officers outside of the building the woman left after visiting the dentist. The video shows two police officers handcuffing the woman in front of her toddler, putting her on the ground and pressing on her body while she screams for help.

When police tried to stop bystanders from filming, one said: "You have no right to stop me from shooting this video. The phone is mine. I can give my lawyer's number.”

The video also shows a staff member from the dentist's office who witnessed the scene saying that what the police are doing is a crime. As bystanders in the video make their opposition to the scene clear, the police remove the woman's handcuffs and release her and leave as if nothing happened.

According to information obtained by Anadolu Agency (AA), the woman seen handcuffed in the video was born in Germany and converted to Islam. The woman, evidently shocked by the incident, is reportedly set to file a criminal complaint against the police.

Germany has witnessed growing racism and Islamophobia in recent years, fueled by the propaganda of neo-Nazi groups and the far-right opposition Alternative for Germany (AfD) party. Germany is home to 81 million people and the second-largest Muslim population in Western Europe after France.

The country has been recording Islamophobic crimes separately since 2017. The total number of cases in 2019 has not been officially announced. In 2018 there were 910, including 48 attacks on mosques alone, a little lower than 2017 with 1,095 crimes. More than 90% of these were attributed to politically motivated crimes by the far-right. Considering that the overall number of crimes has decreased, the assaults have increased, Die Tageszeitung stressed. In 2017 authorities reported 56 Islamophobic assaults with a total of 38 injuries. In 2018, there were 74 offenses with a total of 52 injuries – including two attempted murders.

Racist attacks targeting Muslims or immigrants increasingly make the headlines as white supremacists become more efficient in an age where their ideals, or at least parts of them, are going mainstream. Not a single, large terrorist group harboring a racist agenda against Muslims and immigrants exist, but copycat attacks apparently inspire more to take up arms. The tolerant political climate under the pretext of freedom of speech helped far-right sympathizers with violent tendencies expand their support.