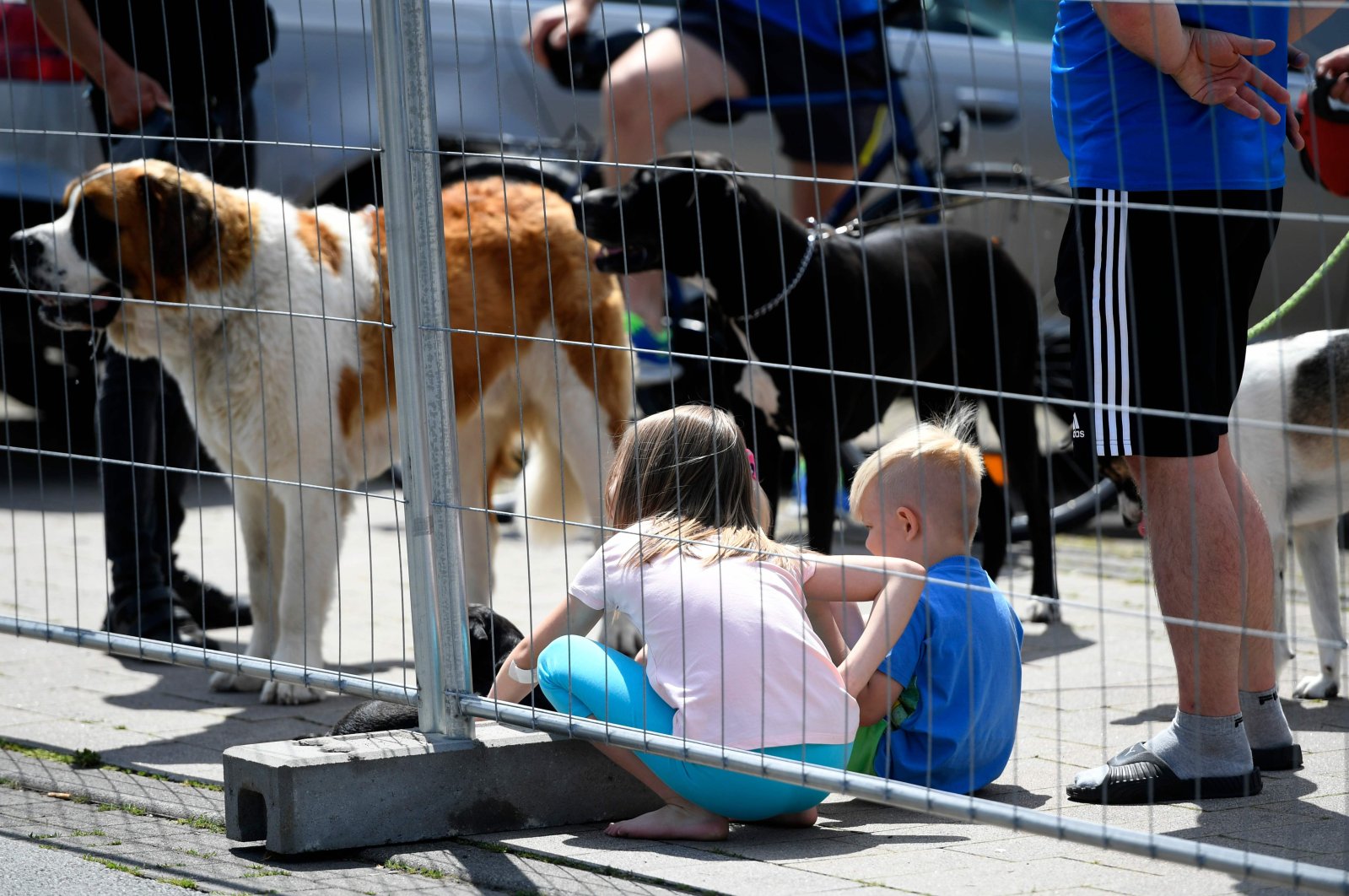 Children sit on the ground beside dogs at the residential homes of employees of abattoir company Toennies during their quarantine in the district Suerenheide of Verl, June 22, 2020. (AFP Photo)
by Compiled from Wire Services Jun 29, 2020 2:44 pm
RECOMMENDED

Germany is investigating some 30,000 suspects as part of a widening probe into a pedophile network in the western Bergisch Gladbach region, authorities said Monday.

"We want to drag perpetrators and supporters of child abuse out of the anonymity of the internet," the ministry said.

Investigations concern the distribution and possession of child pornography as well as other forms of abuse, authorities said.

According to Der Spiegel's report, the North Rhine-Westphalia ministry plans to launch a task force in order to prosecute pedophiles on the net, as well as cyber terrorists and hackers, starting from July 1.

"I did not expect, not even remotely, the extent of child abuse on the internet," North Rhine-Westphalia's justice minister Peter Beisenbach told reporters.

What the investigation team had uncovered was "deeply disturbing", he said.

"We must recognize that child abuse on the internet is more widespread than we had previously thought."

In autumn, police in Bergisch Gladbach detained a 43-year-old man over allegations of abusing his daughter as a baby.

Officials said he was filming abuse and shared the videos with people through the Internet.

To date, just over 70 suspects have been identified throughout Germany.

In May, the first offender a 27-year-old soldier was sentenced to 10 years in prison and placed in a psychiatric hospital for an indefinite period.

Germany has been left shocked at the discovery of several serious cases of child sex abuse over the past 18 months.

In early June, 11 people were arrested on suspicion of sexually abusing children and filming their actions after videos and photos were seized from the cellar of a 27-year-old man from the western city of Muenster, also in North Rhine-Westphalia state.

Officials said then that investigative capacities on child abuse had been increased, which would likely lead to the discovery of more cases.

In an earlier scandal in Luegde, 125 kilometres (80 miles) from Muenster, several men abused children several hundred times at a campsite over a period of several years.

Almost two weeks ago, a disturbing study found that foster children in West Berlin had been placed in the care of pedophiles for more than 30 years, with the most recent case recorded in 2003.

The notion behind the idea of such a pairing was that homeless children would be off the streets and the conspicuous behavior of pedophiles would be mulled – a twisted mentality brought to life by psychology professor Helmut Kentler (1928-2008). The study conducted by the University of Hildesheim revealed that the Berlin senate had condoned and supported this practice and went so far as to give the foster fathers a care allowance.

The renowned professor firmly believed that "sexual contact between children and adults is not harmful." In later years, he described foster fathers taking in boys as an act of being "in love," but divulged his views on his "experiments" publicly only after the statute of limitations had passed.

In the report that the senate commissioned, listed is the cases of two 5-year-olds who were given to foster fathers in 1989 and 1991, and both had regular contact with Kentler.

"It was a crime under state responsibility," said Sandra Scheeres, senator of youth, when the report was first presented to the public last year.

"I have no interest in sweeping anything under the carpet. The senate administration will face its responsibility," she said, apologizing to the victims.

Two men who came into the foster care of Fritz H. in Berlin at the age of 6 describe how they were molested, neglected and isolated from the world.

H. is said to have had 10 foster children over the years. One even died in his care, but the youth welfare department did not order an autopsy. Kentler at the time defended his acquaintance, calling his actions "beyond any doubt."

It is yet unclear how many similar cases have happened over the years. Scheeres filed criminal charges against the foster fathers of the known victims, but in May the prosecutor announced that the statute of limitations had passed. Most of the men are now dead – just like Kentler.