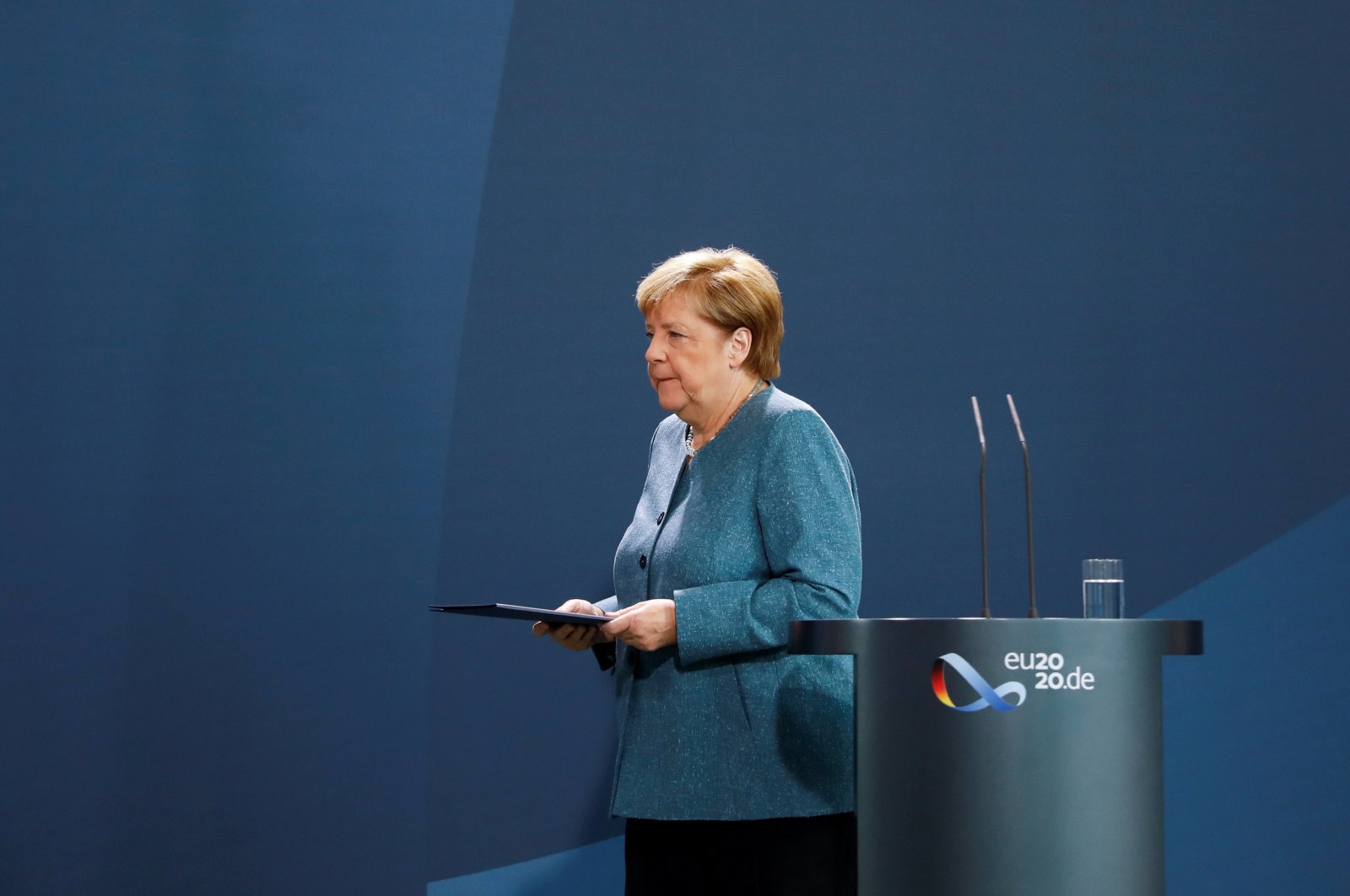 German Chancellor Angela Merkel leaves after a statement about the latest developments in the case of Russian opposition leader Alexei Navalny at the chancellery, Berlin, Sept. 2, 2020. (REUTERS Photo)
by Agencies Sep 03, 2020 1:34 pm
RECOMMENDED

German Chancellor Angela Merkel faced growing pressure on Thursday to reconsider the Nord Stream 2 pipeline, which will take gas from Russia to Germany, after she said Kremlin critic Alexei Navalny was poisoned with a Soviet-style nerve agent.

Merkel said on Wednesday that Navalny, who is being treated in a Berlin hospital, was the victim of a murder attempt using the nerve agent Novichok and demanded an explanation from Russia. Moscow has denied involvement in the incident, and the Russian foreign ministry said Germany's assertion was not backed by evidence. Merkel had previously said there could be a joint response similar to the coordinated action taken following the 2018 Novichok poisoning of former Russian double agent Sergei Skripal in Britain, when 30 Western allies expelled Russian diplomats. In reaction to the new findings, Putin's spokesperson Dmitry Peskov said Russian authorities are ready to fully cooperate with Germany with regard to Navalny.

Merkel has been unwavering in her commitment to the project which includes Uniper Wintershall DEA, Royal Dutch Shell, Engie and OMV. She said last week that Navalny's case should not be linked to the pipeline. Many lawmakers in her party, which is close to the business community, still want it to be finished while others want Merkel to give a tough response to Russia over gas sales.

"We must pursue hard politics, we must respond with the only language (Russian President Vladimir) Putin understands – that is gas sales," Norbert Roettgen, head of Germany's parliamentary foreign affairs committee, told German radio. "If the Nord Stream 2 pipeline is completed now, it would be the maximum confirmation and encouragement for Putin to continue this kind of politics," Roettgen, a member of Merkel's conservatives, told German television earlier.

Nord Stream 2 is set to double the capacity of the existing Nord Stream 1 pipeline in carrying gas directly from Russia to Germany. Led by Russian company Gazprom with Western partners, the project is more than 90% finished and due to operate from early 2021. This may complicate efforts to stop it.

The project has divided the European Union, with some countries warning it will undermine the traditional gas transit state, Ukraine, and increase the bloc’s reliance on Russia for energy supplies. The United States, keen to increase shipments of liquefied natural gas (LNG) to Europe, also opposes the pipeline and has targeted some firms involved with sanctions.

Relations between the European Union and Russia are particularly sour at present, the two sides at odds over a host of issues from Russia's annexation of Crimea and its backing of Bashar Assad to alleged election meddling. The EU has had sanctions targeting whole sectors of the Russian economy in place since 2014.

Two years ago, the Kremlin was also accused of being behind the attempted murder of Skripal and his daughter Yulia in Salisbury, southwest England, using a Novichok nerve agent. The Skripals spent days in a coma before recovering, but local resident Dawn Sturgess died after picking up a discarded perfume bottle allegedly used to carry the poison.

The U.S., EU members, NATO and other nations expelled over 150 Russian diplomats in a coordinated action against Moscow over the Skripal case, leading to tit-for-tat reactions from Moscow.

Navalny's poisoning comes after a daylight murder of a former Chechen rebel commander in a Berlin park in August last year, which German prosecutors believe was ordered by Russia. Merkel had also revealed in May that Russia had targeted her in hacking attacks, saying she had concrete proof of the "outrageous" spying attempts.