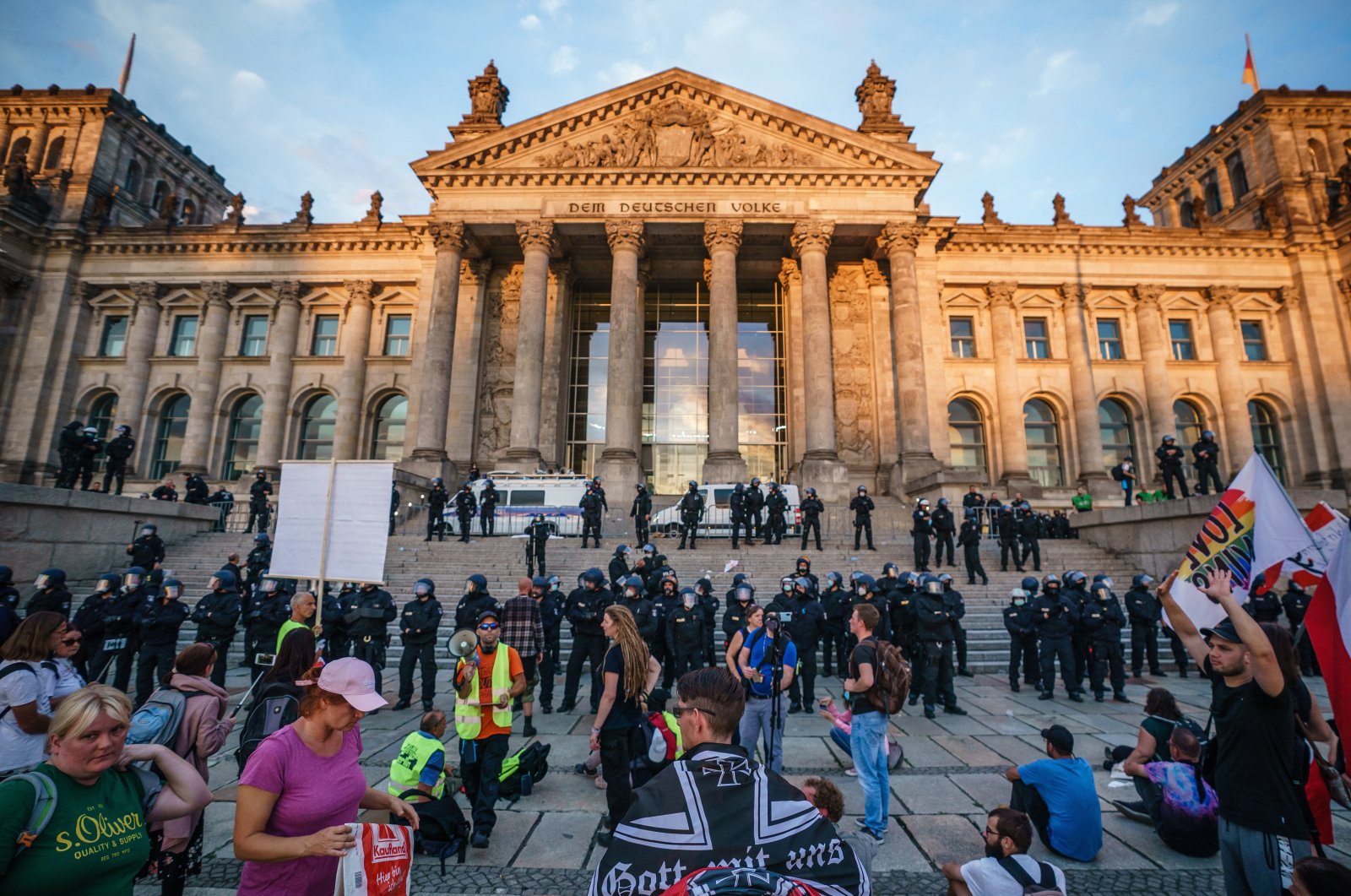 Riot police monitor the scene as right-wing protesters stand in the area in front of the Reichstag building, the seat of the German parliament Bundestag, which was cleared by police after right-wing protesters tried to climb the stairs and enter the building following a protest against government-imposed coronavirus regulations, in Berlin, Germany, Aug. 29, 2020. (EPA Photo)
by French Press Agency - AFP
Aug 30, 2020 9:38 pm

German leaders Sunday condemned the "unacceptable" attempt by protesters to storm the Reichstag parliament building during a mass rally against coronavirus restrictions.

Some of the protesters on Saturday carried the flag of the former German Reich which was used until the end of World War I.

"Flags from the Reich and far-right profanity in front of the German parliament are an unacceptable attack on the heart of our democracy," President Frank-Walter Steinmeier said on Instagram. "We will never accept this."

Police said some 38,000 people, double the number expected, had gathered in Berlin on Saturday to protest restrictions imposed to curb the spread of the coronavirus, such as the wearing of masks and social distancing.

Around 2,000 protesters gathered again not far from the Reichstag on Sunday although police said they were quickly dispersed after police carried out "several identity checks."

Late Saturday, several hundred broke through barriers and a police cordon to climb the steps leading to the entrance to the Reichstag.

They were narrowly prevented from entering the building by police, who used pepper spray and arrested several people.

Police initially appeared overwhelmed, as only a handful of officers were there to block the crowd.

"We cannot be present everywhere and it is precisely these weaknesses in the deployment that were exploited, in this case to cross the security barriers in order to reach the steps of the Reichstag," said local police spokesman Thilo Cablitz.

The Reichstag, where German deputies meet, has a powerful symbolic role in the country.

The building, with its famous dome, was burnt down by the Nazis in 1933 in an act aimed at destroying what remained of German democracy between the two world wars.

Images of the incident at the iconic building shocked Germany.

The Reichstag is the "symbolic center of our democracy," Interior Minister Horst Seehofer told Sunday's edition of the Bild newspaper.

"It is unacceptable to see extremists and trouble-makers use it for their own ends," he said.

"Plurality of opinions" is a "characteristic of the good functioning of society," said Seehofer. But "freedom of assembly reaches its limits when public rules are trampled on."

About 300 people were arrested in scuffles with police, in front of the Reichstag but also outside the Russian embassy not far from there in the city center, where protesters pelted police with bottles.

Berlin city authorities had initially decided not to allow the Saturday demonstration to go ahead, fearing that the protesters would not keep a distance of 1.5 meters (5 feet) apart or comply with face mask requirements.

The ban sparked outrage from organizers and their supporters who flooded social media with angry messages vowing to protest anyway, with some even calling for violence.

But on the eve of the demo, Berlin's administrative court sided with the demonstrators, saying there was no indication that organizers would "deliberately ignore" social distancing rules and endanger public health.

"To see the flags of the Empire in front of the parliament is shameful," tweeted Foreign Minister Heiko Maas.

The rally came as coronavirus cases continue to rise in Germany, with daily new infection numbers reaching highs not seen since April.

At a news conference Friday, Merkel said confronting the virus will become more challenging in the coming autumn and winter months.

Merkel and the leaders of Germany's 16 federal states on Thursday introduced tougher coronavirus restrictions to curb the pandemic, including a minimum 50 euro ($59) fine for people caught not wearing face masks where one is compulsory.