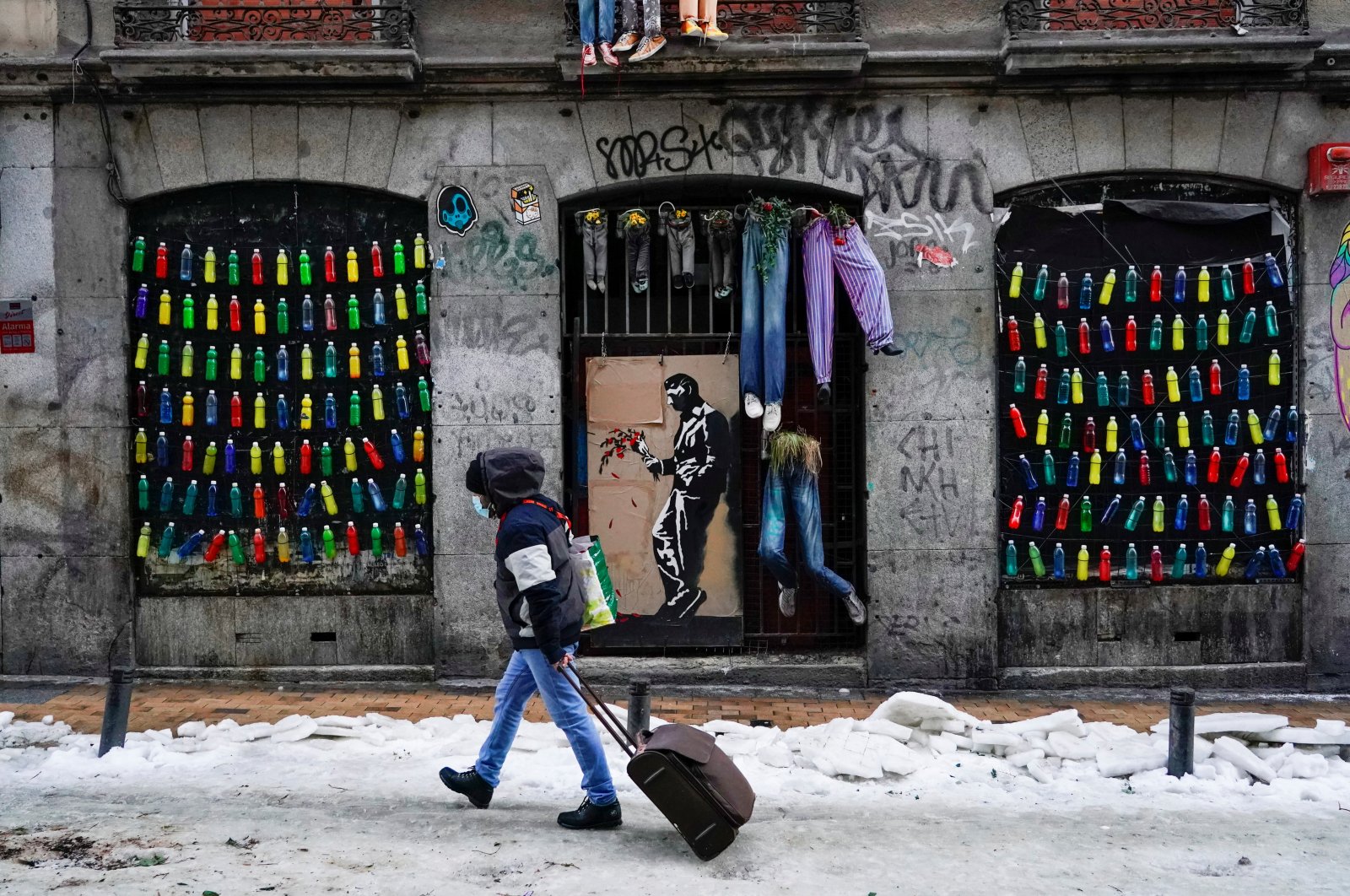 "We're not animals, but dogs live better than us," sighs Lidia Arribas, who lives without electricity in a vast slum near Madrid where temperatures hit historic lows this week.

Days after its heaviest snowfall in 50 years, Madrid awoke Tuesday to its lowest temperatures in decades, with the mercury plummeting to minus 10 degrees Celsius (14 degrees Fahrenheit). The brutal cold has particularly hit Canada Real Galiana, one of Europe's largest slums, where for months more than half of its nearly 8,000 residents have had no electricity for heating or light.

Police blame the shortage on the illegal cannabis plantations whose lamps, extractors and fans use so much power that they cause widespread electrical outages in the surrounding area. The crisis posed by the power cuts and the cold snap has been denounced by United Nations human rights experts, nongovernmental organizations (NGOs) and Oscar-winning Spanish actress Penelope Cruz.

"I'm really angry with the authorities ... everyone passes the buck ... nobody does anything," says Arribas, a 37-year-old mother-of-three, torch in hand as she walks back to her home where mildew covers the walls.

Curled up in a blanket, her 7-year-old daughter Ainara says she always sleeps with her "head under the covers" to protect herself from the cold and the damp. With no electricity, she and her brother and sister cannot access their online homework, and neither the fridge nor the washing machine is working.

An unofficial settlement built along a 16-kilometer (10-mile) stretch of land flanking the southeastern section of Madrid's M50 ring road, Canada Real is home to a community largely of Moroccan or gypsy origin who live in extreme poverty. Built along a former cattle trail, this sprawling shantytown has existed for decades, with this most recent power cut affecting some 4,000 residents.

Without heating, the brutal freeze has left many struggling to cope. On Sunday night, a 3-year-old girl was taken to the hospital "showing signs of hypothermia," says Conrado Gimenez, head of the NGO Fondacion Madrina which provides residents with food, blankets and gas bottles.

A similar case occurred last month and was flagged by U.N. human rights experts who warned the power cuts were "endangering the health of some 1,800 children" in Canada Real.

"Children in Canada Real Galiana are truly suffering, and their health is at risk," they said. "Now that winter is closing in – and especially during the COVID-19 pandemic – electricity must be restored."

"Without electricity, there is no heat in homes and no hot water, meaning children cannot shower or wash properly,” the statement said. "During the COVID-19 pandemic, when hygiene is more important than ever, this is especially troubling.”

Lidia Arribas' next-door neighbor Yolanda Martin says she is "more afraid of the cold than of Covid."

"I get up in the morning and my blankets have frozen, it's pitch dark and I can't have a shower," says the 47-year-old whose lips are blue with cold.

Out of work since May, her only source of heat and light is a chiminea which sits in the middle of her home.

"It will be minus 11 C tonight, as cold as hell, but we're surviving with the little firewood we have left," she told Agence France-Presse (AFP). "We're breaking tables and stuff that isn't worth much to throw on the fire."

Two police officers patrolling the area, notorious for supplying the capital with drugs, say the power cuts are caused by cannabis farms set up in homes in the area. This week, Spanish energy giant Naturgy, which supplies free electricity to Canada Real, began cutting the power to several suspects' homes in order to get the network back up and running.

Local residents and Pedro del Cura, mayor of Rivas-Vaciamadrid where part of the shantytown is located, are calling for more capacity to be given to the network. They also fear that power could be cut to homes with no links to the drug trade.

Despite the cold, Arribas is still hopeful they will be reconnected to the grid so she can warm the house for her children, whose only consolation these days is the neighborhood's running snowball fights.

"We mustn't lose hope," she says, her eyes downcast. "Somebody has to listen to us because we can't carry on like this. It's really very hard. It's very sad."

La Canada Real Galiana is ranked one of the biggest slum areas in Europe. The substandard housing and shacks that make up La Canada stretch some 14 kilometers across the Spanish capital’s industrial outskirts.

The area runs through a flat, nondescript landscape, consisting of a single road with side paths leading to decent houses in better-off areas and shacks constructed of simple brick, metal panels and canvas sheets. Residents do construction jobs or collect scrap metal trying to make a living.

The area has long been associated with the sale of illegal drugs, mostly cocaine and heroin. In recent years, growing marijuana in basements and garages with powerful lamps became an extra source of income for some.

La Canada has few basic services with just one mobile medical unit visiting each day and a bus that takes children to nearby schools. The local shops are flimsy set-ups with little on hand to sell and almost no fresh food. Plans have been afoot for several years to improve facilities and rehouse the neediest residents, but the area typically does not register on the Spanish public’s radar.

Residents have blamed both private national utility company Naturgy and Madrid authorities, who said marijuana growers were responsible for the power outage and that illegal drug activity in La Canada needs to be tackled before electricity is restored.

The U.N. Human Rights Council office also criticized authorities for blaming the outages on marijuana plantations and implying that the settlement’s residents are criminals. Local authorities on Tuesday reported that Naturgy workers, accompanied by police, had begun cutting suspect connections to the plantations. Electricity to the two affected areas was not yet restored.

In the wake of Storm Filomena, the Madrid regional government tried to distribute some 100 gas bottles and heaters on Monday, but workers were met with barricades, insults and stone-throwing from some residents, a sign of the complexity of the problem. Residents say gas bottles are not a solution.

According to The Associated Press (AP), the regional government also set up emergency shelters that could accommodate more than 500 people during the weather crisis. But as of Tuesday, only one family had accepted the offer of a place to stay. "With the situation that there is with the pandemic, I am not going to a shelter,” La Canada resident Gemma San Jose Herraez said. "I have a home. What I don’t have is electricity.”

Meanwhile, the nonprofit group Save the Children called for the Spanish military's emergency service to be sent in to restore power in La Canada until a proper solution is found. "Children and their families are freezing in their houses,” Catalina Perazzo, the organization’s director of awareness and childhood policies in Spain, said in a statement. "We’re on the threshold of a tragedy if action is not taken right now.”