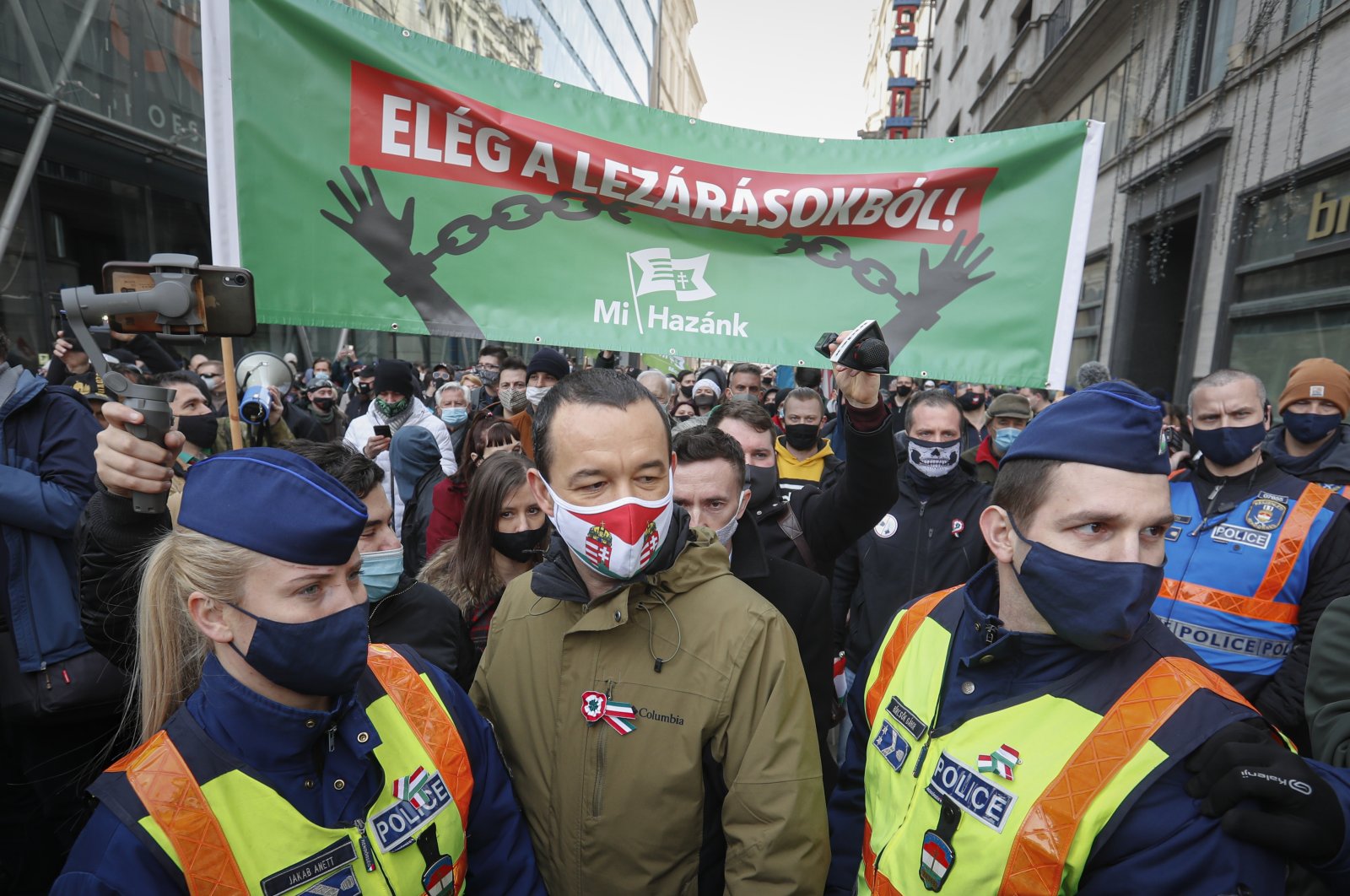 Demonstrators in Hungary’s capital broke a ban on public gatherings on Monday to demand an end to the country's lockdown restrictions, despite a surge in COVID-19 cases and hospitalizations sweeping the country.

The demonstration was organized by a far-right party, Mi Hazank Mozgalom (Our Homeland Movement), and joined by some 1,000 people. The group broke through a police cordon and marched to Hungary's parliament in central Budapest.

They demanded an end to pandemic restrictions that have been in effect for more than four months and have placed a heavy burden on the country's economy.

"They are inciting panic and using that to restrict our freedom, and Hungary is being ruined,” Our Homeland Movement co-chairman Laszlo Toroczkai said, reading aloud his party's demands for a lifting of restrictions that have been in place since Nov. 11.

The restrictions include an 8 p.m. to 5 a.m. curfew, limiting of restaurants to delivery and take-out service and remote learning for high school and university students. An additional set of restrictions went into effect last week, including the mandatory closure of most shops and businesses, as well as a suspension until April 7 of in-school learning for kindergartens and primary schools.

"It’s all a big mess,” said Ferenc Szabo, a shopkeeper who had traveled from his home city of Sopron in western Hungary to join the march. "Testing should be more widespread, the regulations on masks are overblown, but the most important thing is that we cannot work," Szabo said and added, "We are locked down.”

Hungary's service-oriented economy saw a 5.1% decline in GDP last year, and service workers have held several demonstrations in recent weeks demanding either an end to pandemic restrictions or more economic assistance from the state.

A survey published last week by Eurofound, a European Union agency, found that a smaller proportion of Hungarian workers received wage subsidies than in other countries in the 27-member bloc.

Demonstrators’ demands for an end to the lockdown came as Hungary faces the highest levels of new COVID-19 cases and hospitalizations since the pandemic began one year ago.

Last week, the average number of new cases and those being treated in hospitals shattered previous records set in December, and Hungary now has the seventh-highest death rate per 1 million inhabitants in the world, according to Johns Hopkins University.

Police had released a statement calling the demonstration "forbidden, irresponsible and dangerous,” and dispelled claims by organizers that it could be legally held if masks were worn and social distancing observed.

Demonstrators gradually dispersed after police began checking identification documents. The protest marked the March 15 national holiday, which celebrates the Hungarian revolution and war of independence of 1848, a national uprising against the ruling Austrian Habsburgs.

In a letter published by the Hungarian news agency, Prime Minister Viktor Orban wrote that doctors, nurses, scientists and law enforcement workers who risk infection every day in their fight against the pandemic "are the heirs to the patriots.”