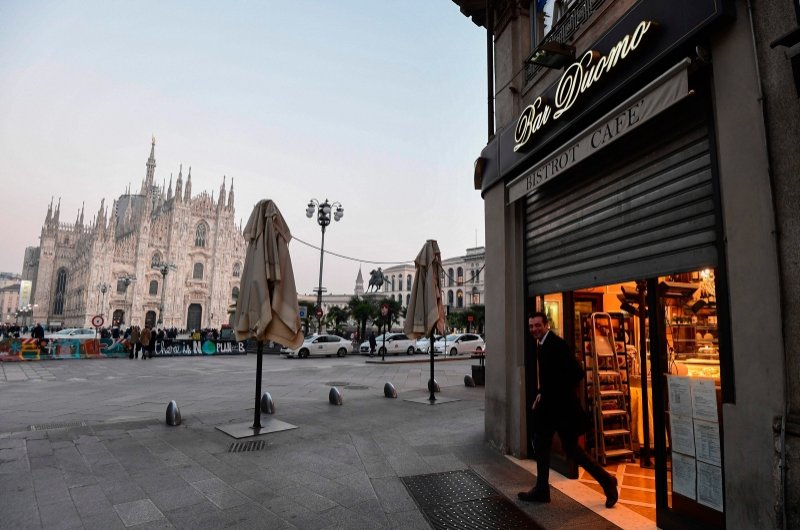 A bar next to the Piazza del Duomo in central Milan closes at 6 p.m. on Feb. 24, 2020, following security measures taken in northern Italy against the COVID-19 the novel coronavirus. (AFP Photo)
by German Press Agency - DPA Feb 24, 2020 10:33 pm
RECOMMENDED

Milan Cathedral is closed and St. Mark's Square is empty. Supermarkets have been stripped bare, and bars and restaurants have been shuttered. Northern Italy is being badly hit by the novel coronavirus, and tracking down the source of the outbreak is proving to be problematic.

Roberto Cighetti lives in Codogno, the small Lombardy town that has found itself at the center of Italy's coronavirus crisis. The streets are emptier than usual, but some people do still go for walks. All shops except pharmacies and supermarkets are closed.
The town, just south of Milan, is home to around 15,000 inhabitants and is now a restricted zone. Dozens of people have contracted the coronavirus there. It's a time to hunker down at home, not to go out to meet friends.
"There are families who are relaxed," says Cighetti, a 33-year-old teacher at a school in the region. "But there are also families who are worried, especially if there's an infected person among them. And then there are families who panic for no reason."
He doesn't like the comparison between Codogno and the Chinese city of Wuhan, where the virus first emerged. "We are a small place, unlike Wuhan, not densely populated, we're surrounded by nature and have many green spaces," he tells the German Press Agency (DPA) by phone. And in Codogno, the inhabitants are allowed to leave their houses.
He regrets the many false reports that circulated about the outbreak on social networks and on Whatsapp. "I only trust official data," he says.
There is concern that the virus will spread to Milan. Several municipalities in the province have been quarantined, with security guards deployed to prevent anyone from entering or leaving. There are now more than 200 known cases in Italy – by comparison, Germany has only 16. And although the six dead so far were all elderly people with pre-existing health conditions, panic is beginning to spread.


In Milan, residents are reporting "surreal scenes." The shelves in supermarkets are empty, says one resident who gave their name only as Vita. Pasta, cookies, milk – everything's gone. Restaurants are closed, many companies have instructed their employees to work from home.
With more than 1.3 million inhabitants, Milan is the second-largest city in Italy and the country's economic and financial center. If it comes to a standstill, the consequences for the economy are likely to be particularly serious.
Many foreign companies also have offices in the region. "We are giving advice to our member companies to do from their home office what needs to be managed," says Joerg Buck, chairman of the German-Italian Chamber of Commerce in Milan. He also recommends a "responsible" approach to business travel. In other words, video or telephone conferences are better than a business trip right now.
Tourism is a vital industry for the region, and whether its skiing holidays or visits to cities like Venice for Carnival, northern Italy will miss the visitors that normally come, and the revenue they bring with them.
"At first we were a bit insecure about saying 'Oh God, do we have to stay here now, will we be quarantined?'" says Regina Stronk from Hamburg, who traveled with a group to the carnival in Venice. After the "first shock-induced paralysis" had subsided, she said, they were very calm. "Life goes on ... We will not panic and immediately pack our suitcase and go home," said the 56-year-old. Some of their group may have left early, "but we're in good spirits. We enjoy Venice with fewer people."
Tourism is the lifeblood of the Italian economy. Now museums, churches and other attractions throughout Veneto and Lombardy are closed, and there are no operas in La Scala in Milan and the Teatro Fenice in Venice. Fashion shows at the Milan Fashion Week were only viewable online. Series A football matches were canceled.
Civil defense chief Angelo Borrelli tries to allay the fears of tourists. "Our country is safe, and you can come here with confidence," he said at his daily news briefing in Rome. However, news of blocked trains on the main railway line between Italy, Austria and Germany continues to unsettle.
Reports of delayed flights and long-distance buses are added to the list. Italian Prime Minister Giuseppe Conte has spoken out several times against closing his country's borders.
The big questions in people's minds are: Why did the outbreak occur and why in these regions? Did somebody make a mistake? Or did the government underestimate the problem and sweep it under the carpet, as opposition leader Matteo Salvini claims?
The problem is that no one knows who "Patient 0" is, in other words, the person who brought the disease with them and infected others. Many patients have no symptoms at all in, and can therefore transmit the virus to others unnoticed.
Italy was the first EU country to ban direct flights to and from China and declare a state of emergency. "But all European states should have blocked the flights to stop the virus," epidemiologist Pier Luigi Lopalco claimed in the newspaper "Il Messaggero." This, he says, is possibly how infected people arrived in Italy via connecting flights from China.
There are, Lopalco says, two explanations why Italy is now affected. "The first is that we have discovered it and the other countries haven't yet."
The second is that Lombardy and Veneto have close economic ties with China and the area is heavily populated. "But if they did as many tests in Germany or Spain as we do here, it's entirely possible that more cases would come to light."
RECOMMENDED