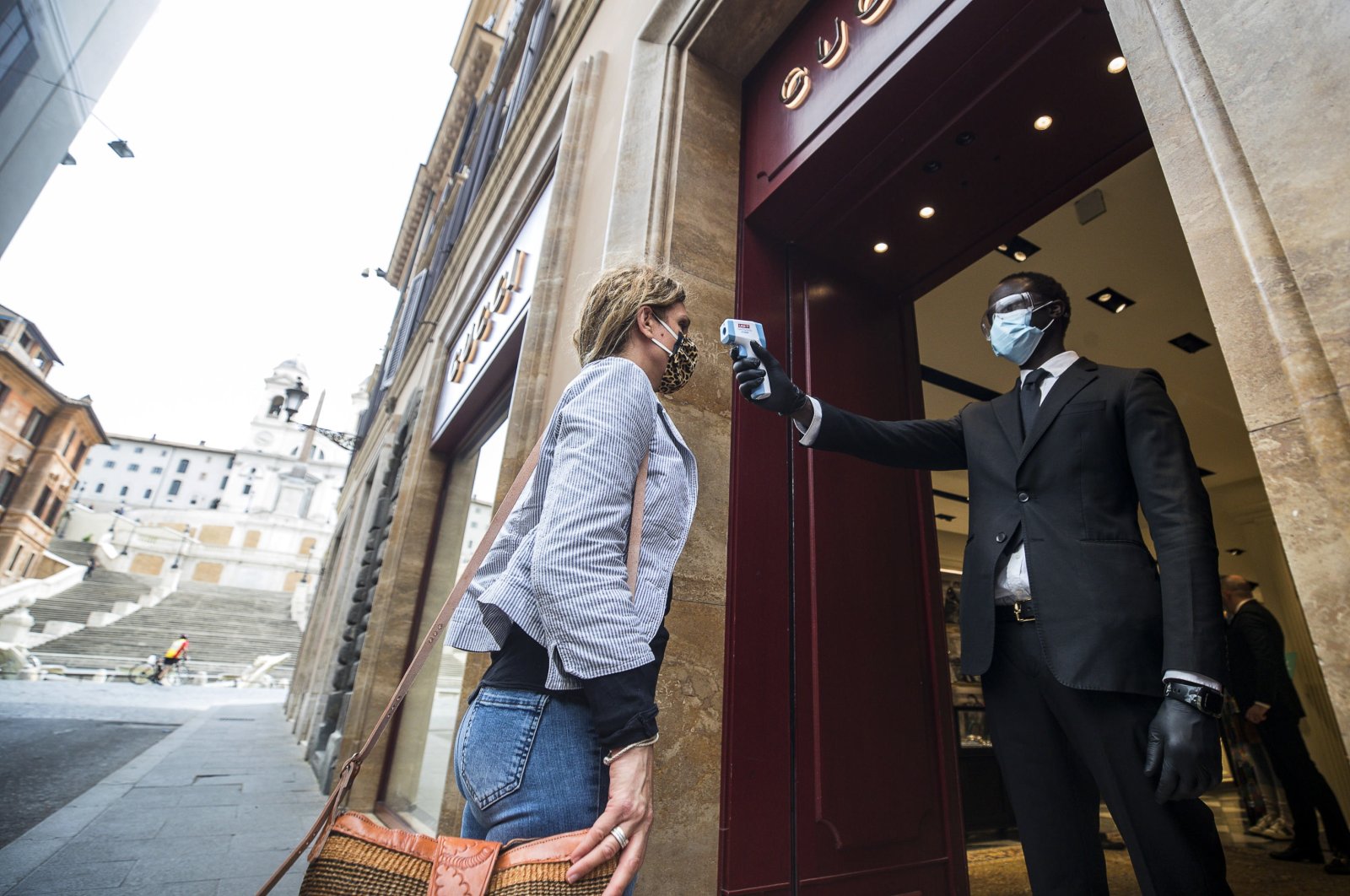 Thermal imaging cameras and digital thermometers are used to scan customers for shops during the second phase of the country's COVID-19 measures, Rome, Italy, May 18, 2020. (EPA Photo)
by German Press Agency - DPA May 18, 2020 2:44 pm
RECOMMENDED

Italy took the biggest step toward a return to post-virus normality on Monday with the resumption of most commercial activities as well as religious services.

"Going back to normality is a bit like relearning how to walk," Prime Minister Giuseppe Conte wrote in a letter to Leggo, a free newspaper.

"One step at a time, with caution and attention, so as to avoid falling and going back. Italy will start running again," he added.

Shops, hair salons, cafes, restaurants and several museums reopened, but they have to ensure social distancing of at least 1 meter (3 feet). Going to the beach and attending Mass in churches are also allowed again.

Retailers' association Confcommercio estimated that some 825,000 commercial activities could resume trading but added that not all would. For example, it expected some 30% of cafes and restaurants will stay shut. Several business owners have complained about the cost of adapting to new health and safety measures.

Some cafes and restaurants opened two weeks ago, but only for takeaways. Now they can do table service, and some venues installed plexiglass screens to separate customers.

At the Vatican, St. Peter's Basilica also reopened, while some other tourist hot spots, like the Colosseum, are expected to wait until the end of May before welcoming back visitors.

People no longer have to fill out a form to justify being outdoors, provided they stay within their region. Travel to other regions is expected to be liberalized on June 3.

In Milan, people queueing to enter the La Rinascente department store had their body temperature scanned at the entrance. Staff applauded the first customers walking in.

Italy, the first country outside Asia to be overrun by the coronavirus, went into national lockdown on March 10. To date, it has reported nearly 32,000 deaths and around 225,500 infections.

Lockdown exit plans are due to continue with the reopening of gyms and pools on May 25, and for cinemas and theaters on June 15.

The country's infection curve has been flattening since late March, but there is concern that the easing of restrictions could trigger a second wave of infections.

Announcing the reopenings on Saturday, Conte said the government was taking "a calculated risk" amid the need to mitigate the economic fallout of the epidemic.

"We must give it a try; people are fed up with being at home, many businesses risk dying," Massimo Galli, the head infectionist at the Sacco hospital in Milan, told the La Repubblica newspaper.

Public health authorities are under pressure to improve their capacity to test, track and treat suspected or confirmed cases of COVID-19, the respiratory disease caused by the new coronavirus.

The government has approved the use of a mobile app for contact tracing, but it is not ready. Digitalization Minister Paola Pisano told the Corriere della Sera daily that it would be by the end of May.