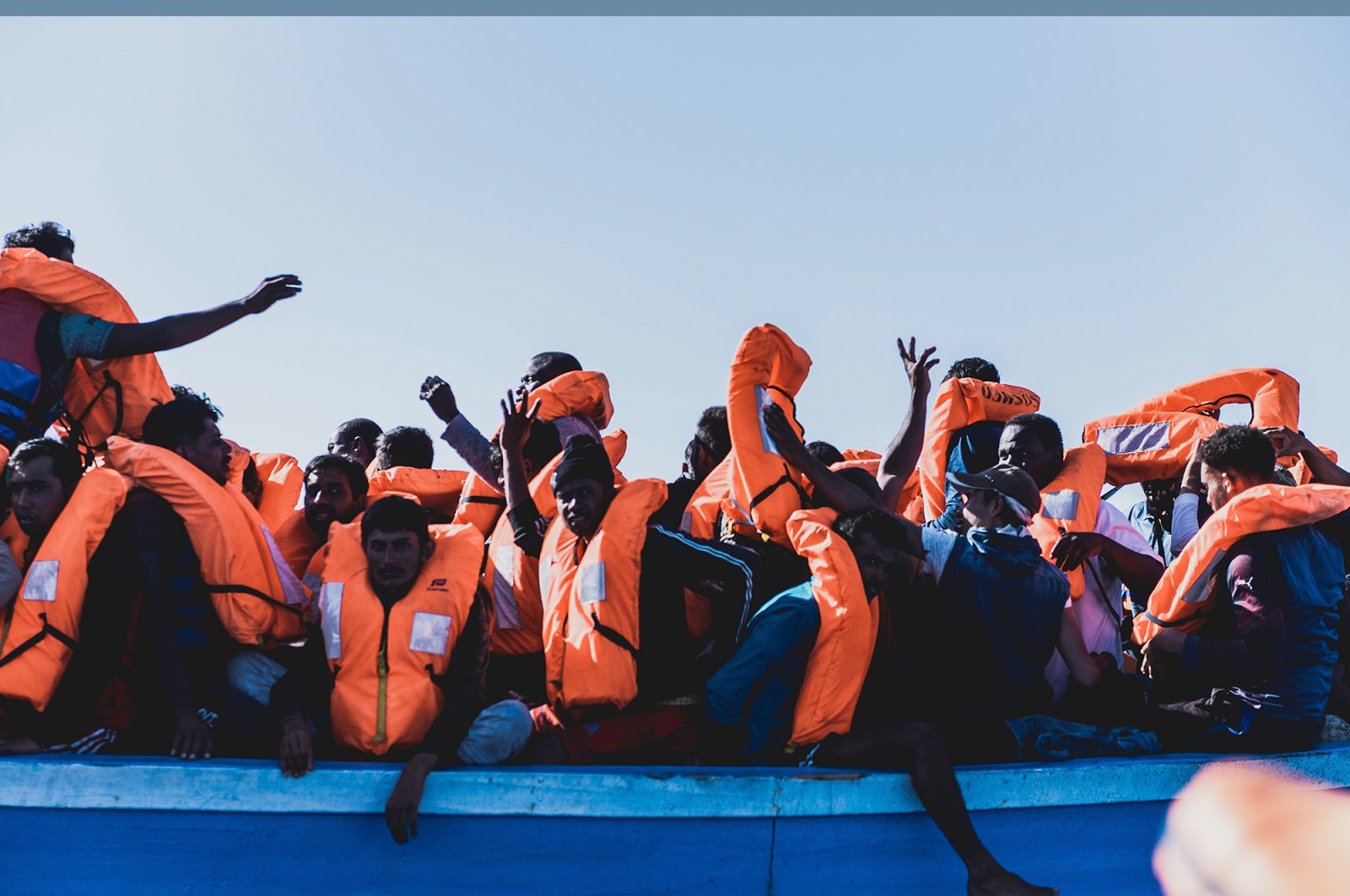 Migrants on a boat wear life jackets after being rescued in the Mediterranean Sea, June 30, 2020. (AP Photo)
by DAILY SABAH WITH AGENCIES Jul 05, 2020 2:29 pm
RECOMMENDED

After hesitating for several days, Italy decided to allow the approximately 180 migrants on the private rescue ship Ocean Viking to transfer to a quarantine ship as migrants stranded at sea for days have become increasingly desperate to reach land.

After suicide attempts, fights erupting on board and migrants jumping into the sea, charity SOS Mediterranee launched an emergency alert on Friday, demanding to be allowed to immediately disembark at a safe port.
The humanitarian group, whose vessel the Ocean Viking has been at sea for over a week with 180 migrants aboard, said it could no longer guarantee the safety of the migrants or crew and called a state of emergency in an unprecedented step. The migrants, which include Pakistanis, North Africans, Eritreans, Nigerians and others, were picked up after fleeing Libya in four separate rescues by the Ocean Viking on June 25 and 30. The migrants include 25 minors, most of whom are unaccompanied by adults, and two women, one of whom is pregnant.

Italy will carry out tests on 180 migrants with a view to transferring them to a quarantine vessel in Sicily, an interior ministry source said Saturday. A medical team sent by authorities in Pozzallo, Sicily "ascertained the absence of particular health problems and also reported that some tensions that had been registered on the ship are being overcome," the ministry source said. The medical team will test the migrants for the COVID-19 virus after which they will be transferred to a quarantine ship currently in Porto Empedocle, also in Sicily.

The boat, which has been in limbo in the Mediterranean south of Sicily, waited for over a week for permission from Italy or Malta to offload the migrants at a safe port. Both Italy and Malta have impeded nongovernmental organizations (NGOs) and aid groups from operating rescue boats, either by refusing them entry to their ports or by impounding their vessels and putting their crews under investigation.

European countries have long been struggling to agree on how to deal with migrants trying to cross the Mediterranean. In 2014, the EU’s border control agency, Frontex, decided to end the Mare Nostrum rescue operation. It was replaced by an operation named Triton, conducted from November 2014 to February 2018 and financed by all 28 EU nations at a fraction of the cost. But unlike the earlier program, the new rescue operation has been criticized due to the fact that the main focus of this joint EU mission is only to manage border security control to keep the massive number of migrants from coming to Europe. Since then, some independent rescue operations by NGOs have attempted to fill the void left after EU efforts ceased while struggling to save many migrants’ lives despite some EU governments’ hardline policies of closing their harbors to humanitarian groups’ rescue ships.
More than 100,000 migrants tried to cross the Mediterranean last year with more than 1,200 dying in the attempt, according to the International Organisation for Migration. The arrival of summer and more favorable conditions at sea may lead to an increase of attempts to cross the Mediterranean with the hope of arriving in Europe.