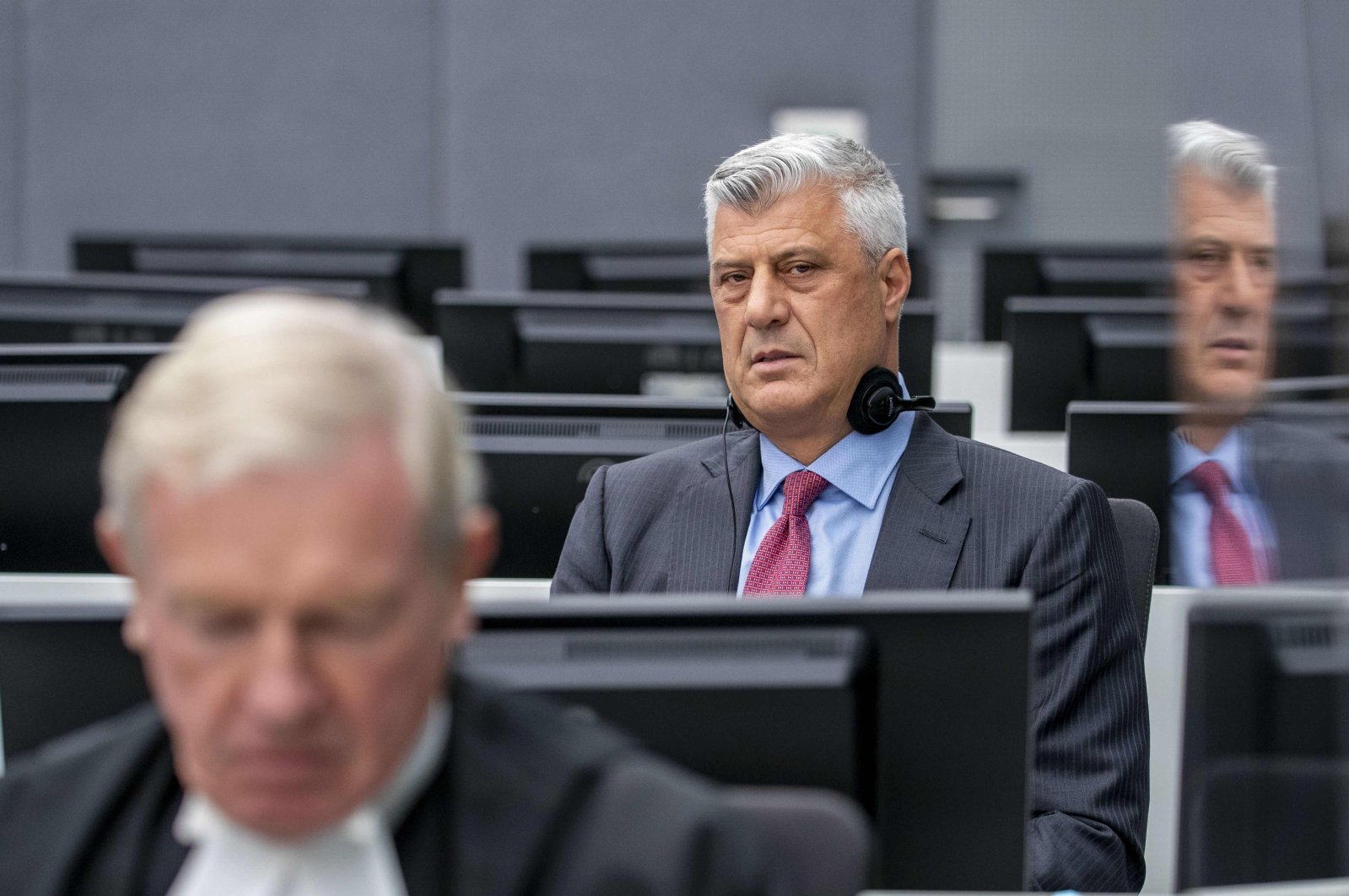 Former Kosovar president Hashim Thaci sits with his lawyer David Hooper (L) for the first time before a war crimes court in The Hague, the Netherlands, to face charges relating to the 1990s conflict with Serbia, Nov. 9, 2020. (AFP Photo)
by Agencies
Nov 09, 2020 5:58 pm

Former Kosovo President Hashim Thaci, appearing before a judge for the first time on Monday after being taken into custody in The Hague, pleaded not guilty to all war crimes charges brought against him.

"The indictment is completely without basis, and I plead not guilty to all the charges in the indictment," Thaci told the court after the judge at the Kosovo Specialist Chambers (KSC) tribunal asked him how he wished to plea, according to Agence France-Presse (AFP).

Thaci, 52, resigned as president last Thursday and flew to the Netherlands where he was placed in the KSC detention center.

An international prosecutor has indicted Thaci on 10 charges of crimes against humanity and war crimes for his leadership of fighters with the Kosovo Liberation Army (KLA) who are accused of illegally imprisoning, abusing and murdering captured opponents and perceived traitors during the war.

The indictment accuses them of "a widespread or systematic attack against the civilian population," including those believed to be collaborating with Serb forces or not cooperating with the KLA.

Thaci, who served as a guerrilla leader during Kosovo’s war for independence from Serbia in the late 1990s before rising to political prominence in the aftermath of the conflict that killed more than 10,000 people, insists he is innocent and has pledged to cooperate with the tribunal.

In July, Thaci met with prosecutors in The Hague to discuss the alleged war crimes and crimes against humanity during Kosovo’s 1998-1999 uprising against Serbian rule. Prosecutors hold Thaci responsible for nearly 100 murders of civilians during the war.

Alongside the former Kosovar president, several politicians have been indicted for crimes. Among them is a former parliament speaker, Kadri Veseli, and three other former commanders of the KLA that fought for independence from Serbia and who also have been charged with war crimes by the court and an associated Special Prosecutor’s Office established five years ago.

Former UCK spokesperson Jakup Krasniqi, one of Thaci's co-defendants, pleaded not guilty to the charges when he made his first appearance in court on Monday.

"It is not right that I am here, an injustice has been done against me," said Krasniqi, a former Kosovar politician who was arrested by armed EU police late Wednesday in Pristina.

"I have never treated people in my life in this way. It was war and we fought against the Serbs who committed genocide in Kosovo," he said, adding that the KLA was in a "joint liberation enterprise" with the United States, NATO and the United Nations. The other co-defendant is key KLA figure Rexhep Selimi.

The Kosovo Specialist Chambers was set up with EU backing five years ago, following a 2011 Council of Europe report which stated that Thaci and others had allegedly been involved in crimes.

Thaci put down his weapons after the war and entered politics, leading then-U.S. Vice President Joe Biden to once hail him as the "George Washington of Kosovo." Many former KLA chiefs have gone on to dominate politics in Kosovo and many still view Thaci as a heroic figure who liberated the country while critics say he is the face of the corrupt, entrenched political elite.