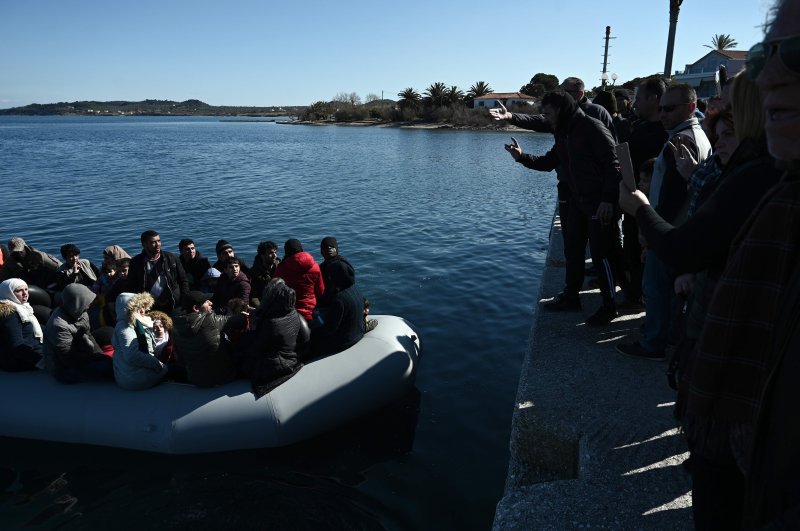 Migrants are seen on an inflatable boat as local residents prevent them from disembarking in Lesbos island, on March 1, 2020. (AFP Photo)
by Compiled from Wire Services
Mar 01, 2020 9:37 pm

Residents on the Greek island of Lesbos set fire Sunday to a disused migrant center after blocking dozens of people from landing on a nearby beach, an Agence France-Presse (AFP) photographer reported.

Around 150 people gathered at the center which was run by the U.N. refugee agency before some of them set it alight.

It came after local people stopped around 50 migrants – including families with young children and babies – from landing their boat and shouted insults at a United Nations High Commissioner for Refugees (UNHCR) official, with some also attacking journalists and photographers.

Members of the group were seen attacking and kicking German journalist Michael Trammer, who later tweeted about the incident.

"My cameras were thrown in the water. I was beaten and kicked heavily. This lasted a while. No police on site, also as I left. Some locals that disagreed with what the attackers did took care of me," Trammer wrote on Twitter, sharing photos and videos from before and after the attack.

Groups of migrants who arrived on other parts of the island remained there for hours because locals prevented buses from reaching them to transport them to the main camp.

More than 19,300 people already live in and around the island’s migrant camp, which has a capacity of 2,840. Protests by island residents last week over the situation degenerated into clashes with riot police on Lesbos and Chios.

The Greek islands have seen an influx of migrant arrivals since Turkey announced Friday it would no longer stop migrants trying to reach Europe. More than 500 people had arrived to the Greek islands from the nearby Turkish coast by Sunday evening, a clear increase in the usual number of people who arrive on the eastern Aegean islands from Turkey.

Existing migrant camps on the islands are already dramatically overcrowded, and tensions there have mounted.