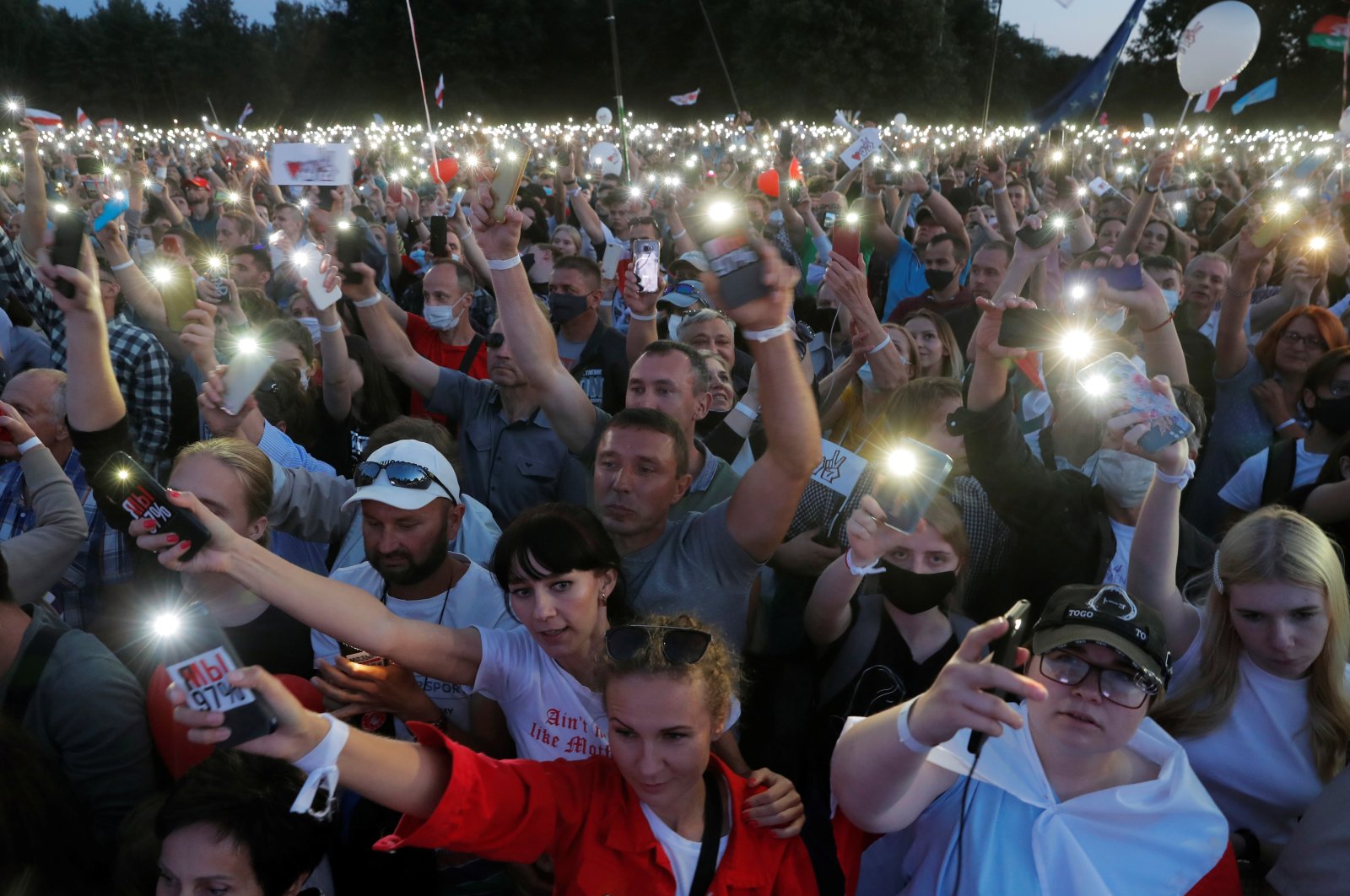 Supporters of Belarusian presidential candidate Svetlana Tikhanovskaya use the flashlights on their phones to express support during an election campaign rally in Minsk, Belarus, July 30, 2020. (Reuters Photo)
by Agencies Aug 23, 2020 12:04 pm

As Europe's longest-serving head of state faces down protesters following his recent reelection many deemed rigged, Lukashenko's opponents say they are not a protest movement but rather 'a majority of Belarusians'

Video from Belarus shows beleaguered President Alexander Lukashenko carrying a rifle and wearing a bulletproof vest as he got off a helicopter that brought him to his working residence as anti-government protests roil the capital.

The dramatic moment occurred as massive protests calling for his resignation flooded the capital of Minsk on Sunday for the 15th straight day.

As Lukashenko landed at the Independence Palace in Minsk, protesters were gathered in a nearby square. The video was released on the Telegram messaging app on a channel that other media identified as being close to Lukashenko’s press service.

Demonstrators massed in central Minsk Sunday after opposition leaders called for a huge rally to demand the resignation of Europe's longest-serving leader, Lukashenko, the latest in a wave of protests against his disputed reelection.

The authoritarian leader dispatched his notorious riot police to disperse spontaneous rallies that erupted after he claimed a sixth presidential term in an election two weeks ago that critics say was rigged.

Tens of thousands of demonstrators draped in red-and-white flags flooded Independence Square and marched through the capital chanting "freedom" and "we will not forget, we will not forgive" as passing cars honked in support.

Officials issued a warning to Belarusians against participating in "illegal demonstrations" and local news outlets published videos on social media showing a water cannon and riot police with shields moving toward Independence Square.

The defense ministry said it would intervene to protect "sacred" World War II memorials, and several metro stations in Minsk were closed.

Opposition-leaning media and Telegram channels reported that more than 100,000 protesters had convened for the second Sunday in a row and an AFP journalist said smaller demonstrations erupted in provincial cities.

Solidarity rallies were also scheduled in neighboring Lithuania, where demonstrators planned to form a human chain from Vilnius to the border with Belarus, 31 years after residents of the Baltic states joined hands and linked their capital cities in a mass protest against Soviet rule.

The European Union has rejected the results of the presidential elections, and this week promised to sanction Belarusians responsible for ballot fraud and a police crackdown that saw nearly 7,000 arrested and sparked gruesome allegations of torture and abuse in police custody.

Lukashenko has brushed aside the unprecedented calls to stand down, dismissed the possibility of holding a new vote and instructed his security services to quell unrest and secure the borders.

His judiciary opened a criminal investigation into the opposition's Coordination Council that seeks new elections and the peaceful transition of power after he said opponents wanted to "seize power."

The former collective farm boss ordered his army into full combat readiness during a troop inspection on Saturday near the border with the EU and warned about NATO troop "stirrings" in Europe.

"The fatherland is now in danger. We cannot joke," Lukashenko said. Lithuanian President Gitanas Nauseda, in turn, said Lukashenko was trying to "divert attention" from unrest at home, and NATO dismissed the claims as baseless.

The unlikely leader of Belarus's opposition, 37-year-old Svetlana Tikhanovskaya, fled to Vilnius fearing reprisals for claiming victory in the elections and mounting the greatest challenge to Lukashenko in his 26-year rule.

In an interview with AFP ahead of the demonstrations, she urged protesters to continue to exert pressure on the authorities, saying it was "important to continue to be united in the struggle for the rights."

The authorities have to understand "we are not a protest movement... we are a majority and we will not step away. We are not afraid of them anymore," Tikhanovskaya told AFP.

Opponents of Europe's longest-serving leader have organized strikes and the largest protests in the ex-Soviet country's recent history, rejecting his reelection and demanding that he stand down, with more than 100,000 people turning out in Minsk alone last weekend.

Yet fewer workers at state-run factories – usually a bastion of support for Lukashenko – have continued to strike, with activists citing pressure from authorities.

The 65-year-old president of Belarus has threatened to shutter production lines where workers have put down their tools beginning on Monday.

Staff at state-run media outlets have also staged walkouts and Lukashenko admitted this week that journalists from Russia had been flown in to replace them.

His powerful ally, Russia, has warned European leaders against interfering in Belarus, and the Kremlin has said it would intervene in the post-election unrest if necessary.

Russia and Belarus are members of a military alliance of former Soviet countries, and Lukashenko said on Saturday he had warned Russia about the situation in its ex-Soviet neighbor.

Lithuania's foreign ministry announced Saturday that U.S. Deputy Secretary of State Stephen Biegun will visit Lithuania and Russia next week for talks on the election fallout.

Lukashenko's military inspection this weekend inspection came ahead of large-scale military exercises planned in the Grodno region on the border with the EU between Aug. 28 and 31.