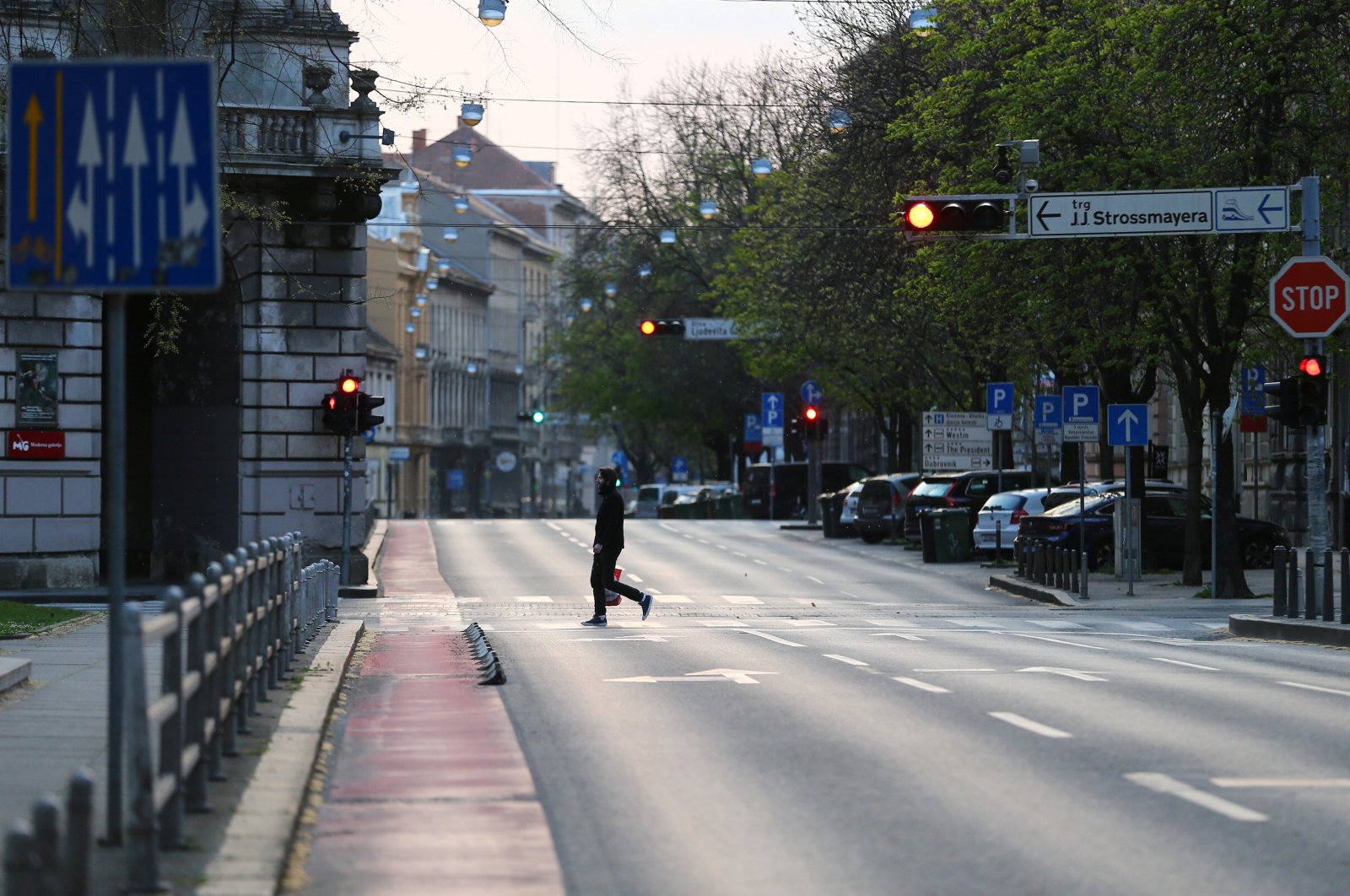 A man crosses a street in Zagreb, Croatia, where authorities have been stepping up measures to fight the coronavirus outbreak, March 21, 2020. (Reuters Photo)
by Associated Press Mar 22, 2020 9:09 am
Edited By Asene Asanova
RECOMMENDED

A strong earthquake in Croatia on Sunday caused panic, the evacuation of hospitals and widespread damage including to the capital's iconic cathedral - all amid a partial coronavirus lockdown.

A 15-year-old was reported to be in critical condition and several others were injured, news outlets reported.

The European seismological agency, EMSC, said the earthquake measured 5.3 and struck a wide area north of the capital, Zagreb, at 6:23 a.m. (0523 GMT) Sunday. The epicenter was seven kilometers (four miles) north of Zagreb at a depth of 10 kilometers (6 miles).

Prime Minister Andrej Plenkovic said the earthquake was the biggest in Zagreb in the last 140 years.

Many buildings in the capital cracked and walls and rooftops were damaged. Downtown streets were littered with debris. Concrete slabs fell on cars and chimneys landed in front of entrances.

Footage from the scene showed mothers dressed in nightgowns hugging their newborn babies in a parking lot as they evacuated a damaged maternity hospital amid freezing temperatures. The women, newborn babies and incubators were being moved to a new location with the help of the army.

Zagreb's iconic cathedral was also damaged, with the top of one of its two spires collapsing. The cathedral was rebuilt after it toppled in the 1880 earthquake.

Power was cut as people ran out of their homes. Several fires were also reported. At least two other temblors were recorded later. Residents shared photos of belongings falling off shelves, broken bottles and glass inside homes.

Officials first said a 15-year-old was killed, but doctors later said that she was in critical condition and that they were fighting to save her life. They gave no immediate details on the extent of other injuries.

The earthquake struck amid a partial lockdown of the capital because of the spread of the coronavirus. People were told to avoid public areas, such as parks and public squares, but had little choice as they fled their residences.

Up to five people are allowed to be together while keeping a distance.

Health Minister Vili Beros warned people to keep a two-meter (around seven-foot) "social distance" as requested by decrees passed by the government in an attempt to prevent the spread of COVID-19. There are 235 coronavirus cases confirmed so far in Croatia.

"Earthquakes are dangerous, but coronavirus is even more so," Beros said, as people rushed out of their homes to congregate in city parks.

Some of Zagreb residents disagreed.

”Earthquakes are more important than the coronavirus. If the earthquake hits, and you are under a door, you worry about yourself first and then the mask later,” Paul, a man from Peru who lives in Zagreb, told a local TV station. He gave only his first name.

Plenkovic, the prime minister, urged citizens to remain calm and stay outside their homes in the central parts of Zagreb, which sustained the most damage.

"We have two parallel crisis that contradict each other,” Plenkovic said after an emergency meeting of Croatia's top officials.

Croatian soldiers wearing masks and carrying shovels could be seen helping efforts to clear the damage on the streets of Zagreb. Top officials toured the damaged areas as some citizens criticized city authorities over the poor states of buildings in the old part of the city, some of which date back to the 19th century.

"We will try to clear the streets as soon as possible," the prime minister said. "Stay outside your homes and keep distance.”

Interior Minister Davor Bozinovic said the situation was complicated by the restrictive virus-related measures in place.