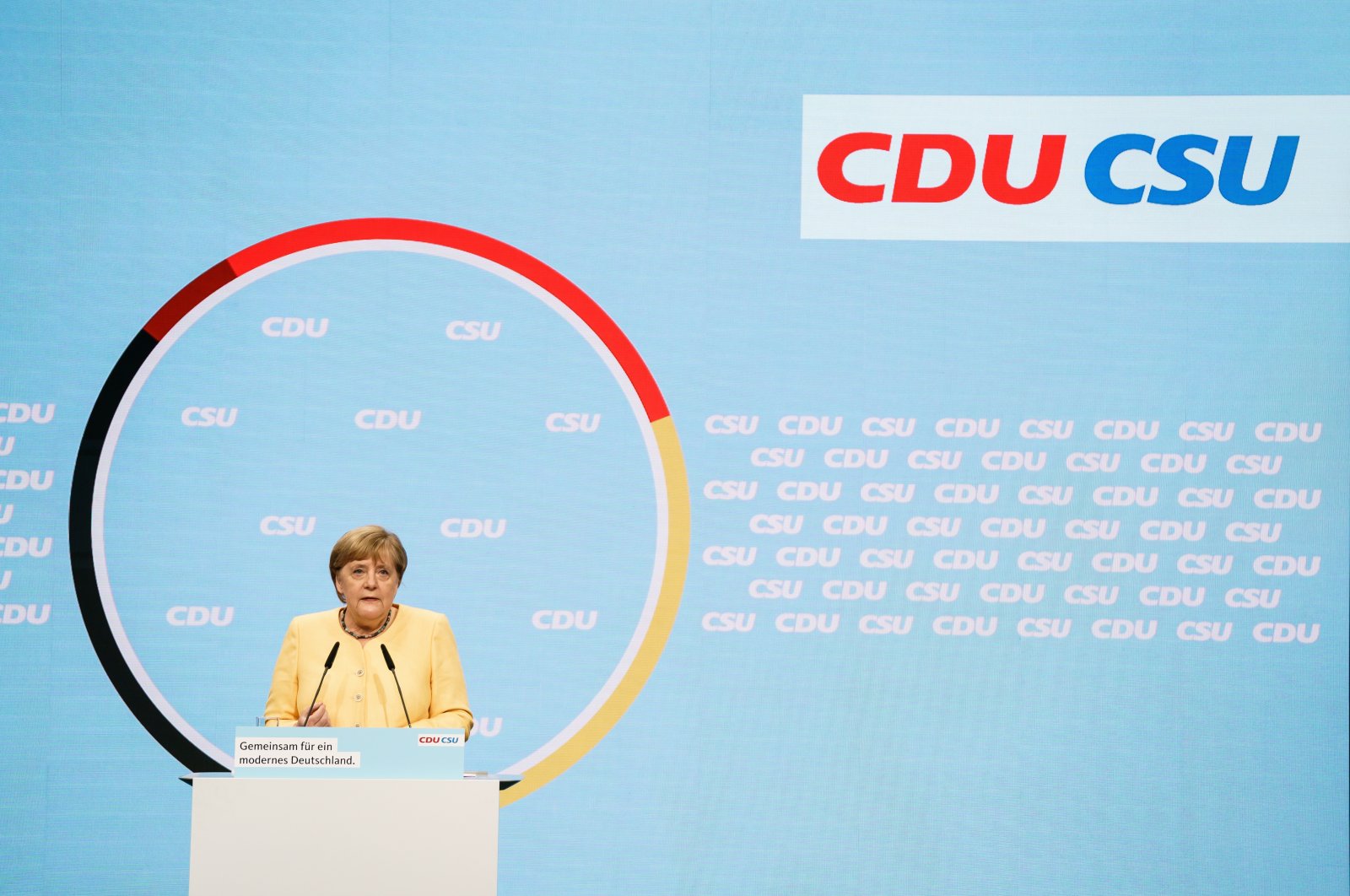 German Chancellor Angela Merkel Saturday gave her would-be successor Armin Laschet a ringing endorsement, in a bid to shore up his ailing election campaign that has triggered fears their party could crash out of government.

Merkel's conservative CDU-CSU alliance has led Germany in various coalitions since 2005 when she took office, but the country's future new government has been thrown open as her departure from the political stage nears.

The 67-year-old veteran will step down after the Sept. 26 elections and had so far refrained from commenting about who she preferred to take over from her.

But Saturday, at a key election campaign rally, she came out to voice strong backing for Laschet.

"It has always been important to him to place the individual and their inviolable dignity at the center of everything ... I am deeply convinced that it is precisely with this attitude that (he) will serve the people of Germany as chancellor," she said at the rally.

While Merkel's popularity ratings have held steady in the twilight of her reign, Laschet has struggled to find favor with voters.

The latest polls show their conservative bloc now hanging on to a narrow lead of 2 percentage points against junior coalition partners the Social Democrats, who have in recent weeks made big strides to overtake erstwhile runners-up the Greens.

A survey published Friday showed just as many Germans want the Social Democrats to lead the next government as the conservatives – an alarmingly big drop of 5 percentage points in backing for the CDU-CSU from early August.

While frustration against the government over the coronavirus pandemic had initially weighed on the conservatives' popularity earlier in the year, the mood had brightened as more Germans were vaccinated and curbs were eased.

An initial boost in support for the Greens had also melted away as its leader was embroiled in a plagiarism scandal and other gaffes, giving the conservatives a strong lead in polls entering the summer.

But the mood dramatically turned in July when Laschet was seen chuckling in the background with local officials while Germany's president gave a speech mourning victims of deadly floods.

Since the disaster, the conservatives have been unable to halt a falling trend in popularity.

The Taliban's lightning takeover of Afghanistan also puts more pressure on Merkel's government, which is under fire for failing to anticipate the crisis sooner.

On the eve of Saturday's rally, criticism from several backbenchers spilled out into the open, with the Bild daily even quoting deputies apparently urging Laschet to step aside for the sake of the party.

"A quick and painful reaction is better than to go down together," CDU lawmaker Sylvia Pantel was quoted as saying by Bild.

The jitters in the conservative camp also risk reviving strife that had dogged the alliance of CDU and its sister party CSU even before the start of their election campaign.

Laschet only secured the conservatives' chancellor candidate nomination in April after a bruising battle with the leader of Bavaria's CSU, Markus Soeder.

Despite conceding after the loss, a whiff of discontent has lingered in the air from Soeder's camp as the Bavarian has been consistently ahead in popularity polls against Laschet.

In a new jibe from Soeder's camp Friday, CSU General Secretary Markus Blume said there was "great potential for improvement" in the conservatives' poll ratings, and that is "especially, by the way, when measured against the tremendous popularity Markus Soeder continues to enjoy."

At Saturday's rally, Soeder underlined that it was the conservatives' toughest campaign since 1998 when the alliance was voted out of government.

"The trend is clear at the moment – it's not heading upward. And that's why today is important, all's not lost yet," he declared.

"There's no reason to complain, rather, it is time to really put up a fight," he said.