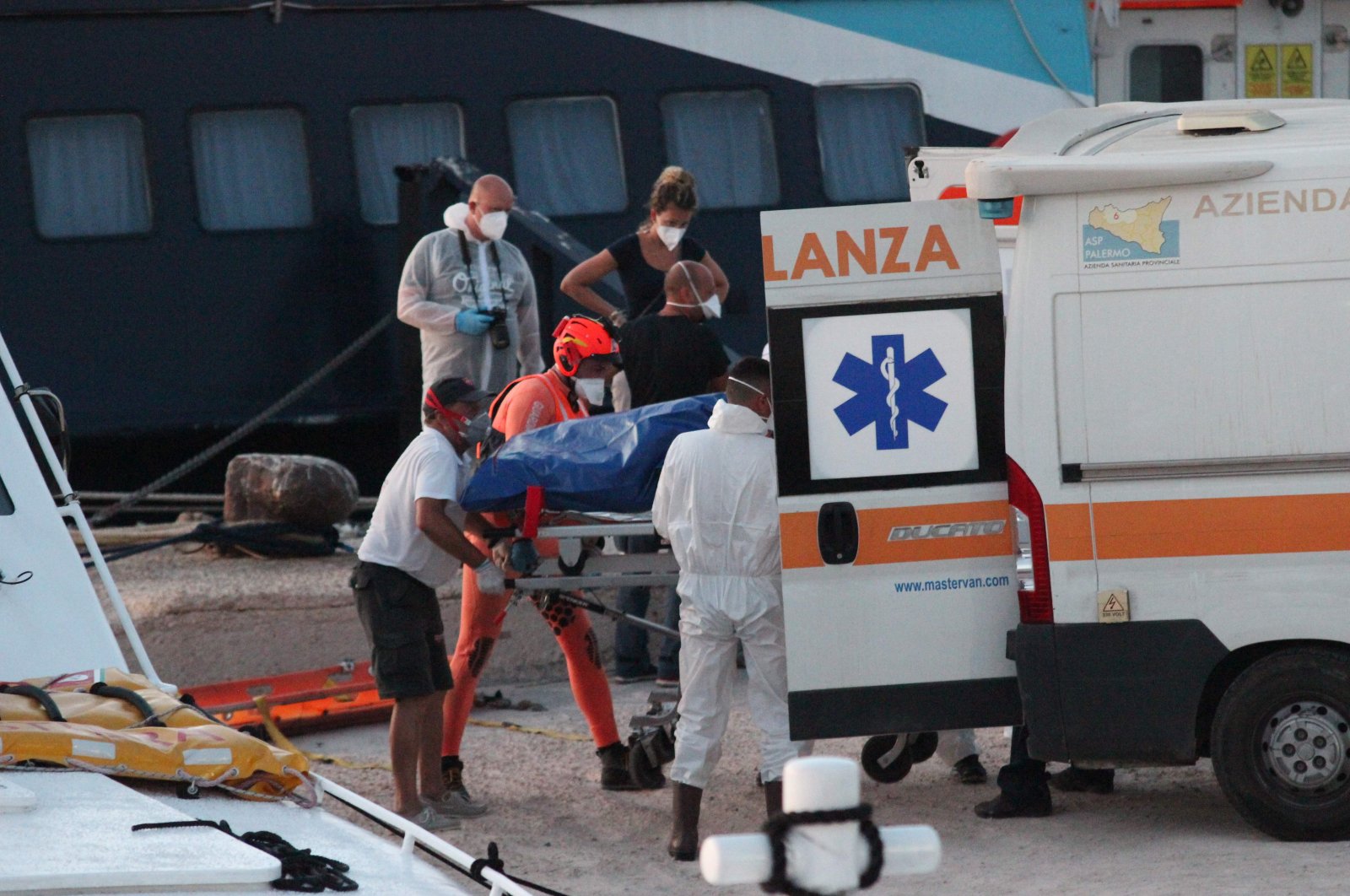 The body of a dead migrant wrapped in a blue bag is being put into an ambulance, after some 49 rescued migrants arrived at the commercial port of Lampedusa from the Coast Guard patrol boat "CP-319" (Rear R), which transhipped rescued migrants from the civilian rescue boat "Louise Michel" 80 kilometers southeast of the Italian pelagic island, Aug. 29, 2020. (AFP Photo)
by ASSOCIATED PRESS Sep 04, 2020 1:14 pm
RECOMMENDED

An Eritrean man running away from a residence for asylum-seekers in Sicily was struck and killed by a car, which also injured three police officers who were pursuing the migrant on a highway early Friday.

The man was one of about 20 migrants who were trying to flee the residence a day after many of them climbed to the roof and staged a noisy protest against crowded living conditions during the coronavirus pandemic, Italian news agency ANSA said.

The driver was arrested for investigation of vehicular homicide, Rai radio reported.

One of the injured officers had surgery for a fractured leg.

The officers gave chase after several migrants fled the residence in Siculiana, near the Sicilian tourist town of Agrigento, the reports said. The others were believed to have been brought back to the center.

During the pandemic, protests have erupted at some residences housing migrants, many of which in Sicily and in towns in the south of the Italian mainland are seriously overcrowded.

The island of Lampedusa has appealed to the Italian government to remove hundreds of migrants. The island receives Europe-bound asylum-seekers who set out from the Tunisian coast or were rescued from flimsy dinghies and decrepit fishing boats launched from Libya by human traffickers.

The migrant processing center on Lampedusa is meant to hold fewer than 200, while recently there were some 2,000 migrants there, the mayor has said.

As a precaution against the spread of the coronavirus, the Italian government has been sending chartered ferries to quarantine migrants before they are relocated to residences in Sicily or on the mainland.

Two more ferries were dispatched to take on hundreds more of the migrants by the end of the week, including from Lampedusa, the Interior Ministry has said.

Most of the recent migrants are fleeing poverty, not persecution or armed conflicts, so they risk being denied asylum.