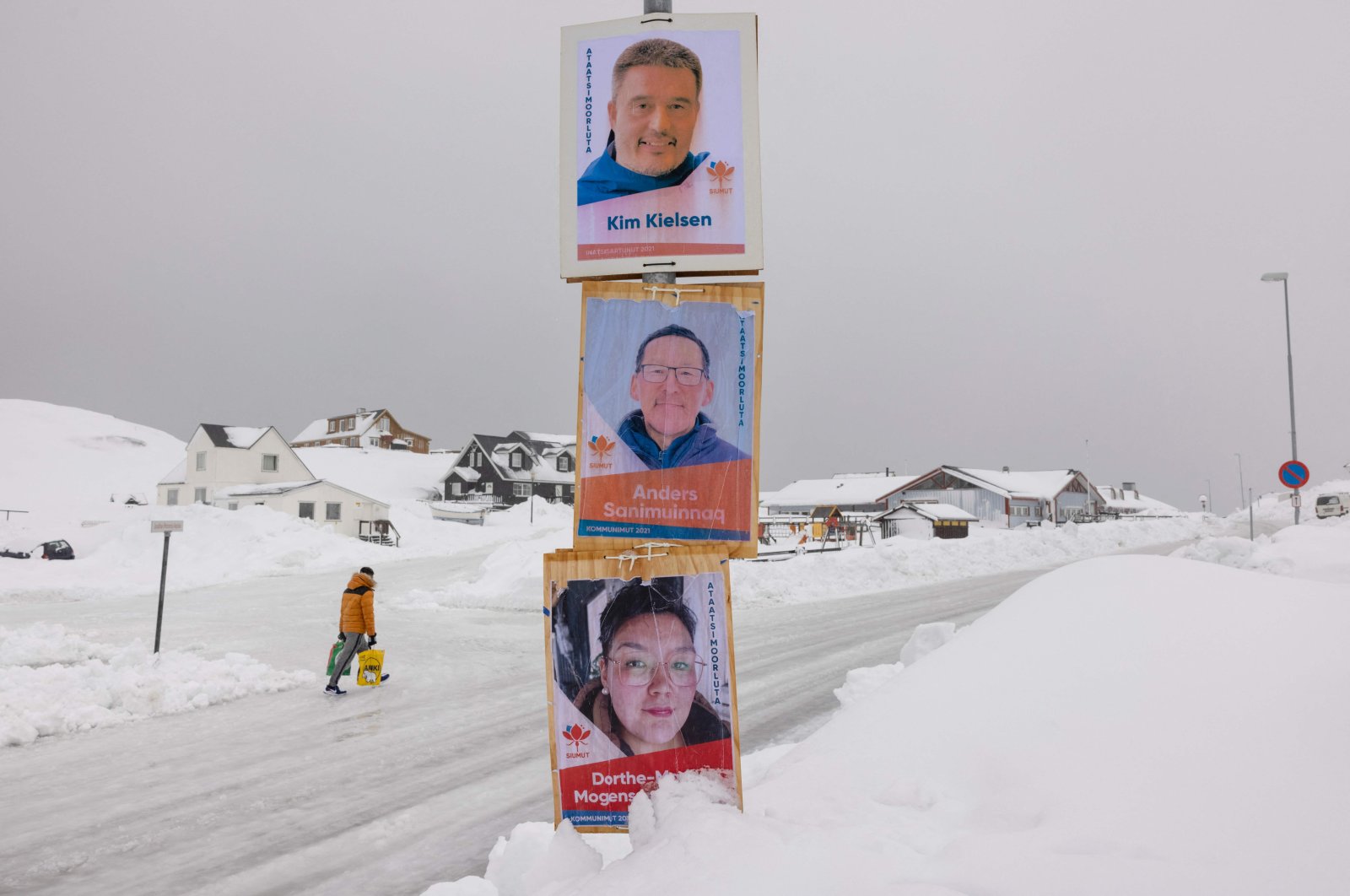 Election campaign posters with candidates for the legislative elections of the Siumut party, including Greenland's Prime Minister Kim Kielsen (top), are plastered on a lamppost in Nuuk, Greenland, April 5, 2021. (AFP Photo)
by French Press Agency - AFP Apr 06, 2021 11:15 am
RECOMMENDED

Greenland residents will go to the polls on Tuesday to elect their legislators during a time of rising concerns over global warming and disputed mining projects that have taken the center stage in the debates among politicians.

The two main parties of Greenland – an autonomous Danish territory – are divided on whether to authorize a giant rare earth and uranium mining project, as supporters, including the ruling social-democratic Siumut party, say the mine would yield an economic windfall. Opponents, such as the opposition left-green IA party, argue it could harm the vast island's unspoiled environment.

The election campaign for parliament's 31 seats has also centered on fishing, the main driver of Greenland's economy, at a time when young Greenlanders are reconnecting with their Inuit roots and questioning their Danish colonial heritage, social issues and cultural identity – topics that have also been part of the debate.

Polling stations open for the island's 35,000 voters at 11 a.m. GMT and close at 10 p.m. GMT, with the final results expected early Wednesday.

IA is leading in the latest opinion polls with around 36% of voter support, while Siumut, which has been in power almost uninterrupted since Greenland gained autonomy in 1979, is trailing with 23%. Experts however have warned that the outcome is nevertheless uncertain.

Nor was it likely that either of the two biggest parties would get a majority of the 16 seats. The most likely scenario, he said, was "that IA forms a coalition with one or two smaller parties". IA has called for a moratorium on uranium mining, which would effectively put a halt to the mining project.

The Kuannersuit deposit, in the south of the island, is considered one of the world's richest in uranium and rare earth minerals, a group of 17 metals used as components in high-tech devices such as smartphones, flat-screen displays, electric cars and weapons.

Local authorities have to give their stamp of approval before the Australian group Greenland Mining can get an operating license. Siumut party leader Erik Jensen has said the mine would be "hugely important for Greenland's economy," helping diversify revenues.

That is crucial if the island wants to gain full independence from Copenhagen someday. Denmark, which is not opposed to Nuuk's independence, gives the island annual subsidies of around 526 million euros ($638 million), accounting for about a third of its budget.

Greenland plans to grow its economy by developing its fishing, mining and tourism sectors, as well as agriculture in the southern part of the island which is ice-free year-round.

"To harvest sustainably the living natural resources, like fish stocks, is going to be the most long-term (solution) for Greenland," Minik Rosing, a geobiology professor at the University of Copenhagen, told AFP. The island's mineral potential "has only been investigated to some extent, but not in depth," he added.

For Cambridge University Arctic specialist Marc Jacobsen, keeping the option of large-scale mining open is the reason why Greenland has not signed the Paris climate accord. The treaty lets states decide their own measures to meet the common goal of keeping global warming under two degrees Celsius.

"Signing the Paris Agreement would not allow them to develop any big mining project," Jacobsen noted. Yet the Arctic has been warming twice as fast as the rest of the planet since the 1990s, dramatically affecting the traditional way of life for Inuits, who make up more than 90% of Greenland's population.

IA has vowed to sign the Paris Agreement if it comes to power.