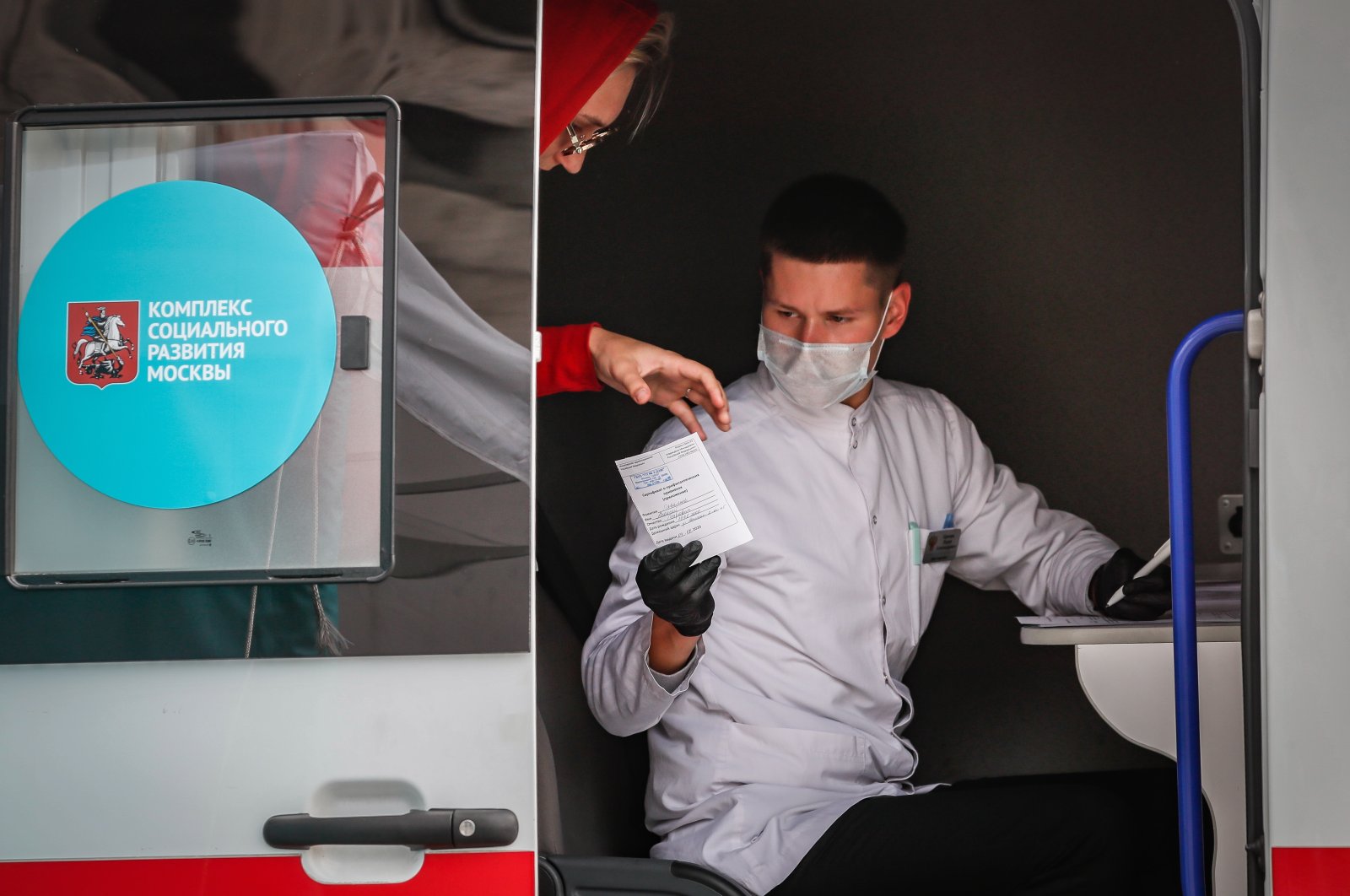 A woman receives a vaccination document after receiving a free flu vaccine at a mobile vaccination station on a street in Moscow, Sept. 4, 2020. (EPA Photo)
by French Press Agency - AFP Sep 25, 2020 10:00 am
RECOMMENDED

Moscow Mayor Sergei Sobyanin on Friday ordered the elderly to stay at home and recommended employers allow working from home after the Russian capital saw a sharp rise in coronavirus cases.

Sobyanin's message came after virus figures that had remained steady for several months climbed steeply in recent days in Russia, the world's fourth most affected country, and particularly in Moscow, where current case numbers are the highest since late June.

Sobyanin said Muscovites over 65 years old should stay at home from Monday and shop rarely, while walks outside remain unrestricted.

At the beginning of the virus lockdown, Sobyanin brought in harsh measures including canceling seniors' free travel passes.

"Unfortunately we see a significant increase in the number of confirmed cases in Moscow in recent days," Sobyanin said in his official blog.

New coronavirus cases in Moscow on Thursday reached their highest level since June 23, at 1,050, and Sobyanin said there had been a "serious" increase in hospital admissions.

On Friday, he warned that simultaneously catching a common cold and the virus as winter approaches was particularly dangerous for elderly people and those with chronic illnesses.

The mayor's decree presents this as a compulsory rule, with exceptions for medical care, shopping, walking dogs and commuting to work.

Sobyanin said those in the risk groups should work from home or take a vacation if possible.

He also told company heads: "I firmly ask and recommend you to move as many of your staff as possible to home-working."

Employers should offer virus testing and temperature checks, he said.

Warning the virus is "not conquered yet," he called for Moscow residents to wear face masks and gloves on public transport and in shops, a rule already in place but widely flouted.

At the peak of the lockdown, Sobyanin only allowed people to go to their nearest shop or walk a dog, while those using public transport or cars needed electronic passes.

"We all really don't want to go back to the harsh restrictions of spring," Sobyanin said. "I hope we can avoid this."

It has boasted of creating the world's first approved coronavirus vaccine, Sputnik V, although it is still undergoing clinical trials.

Sobyanin is among the high-profile officials to have gotten the vaccine.