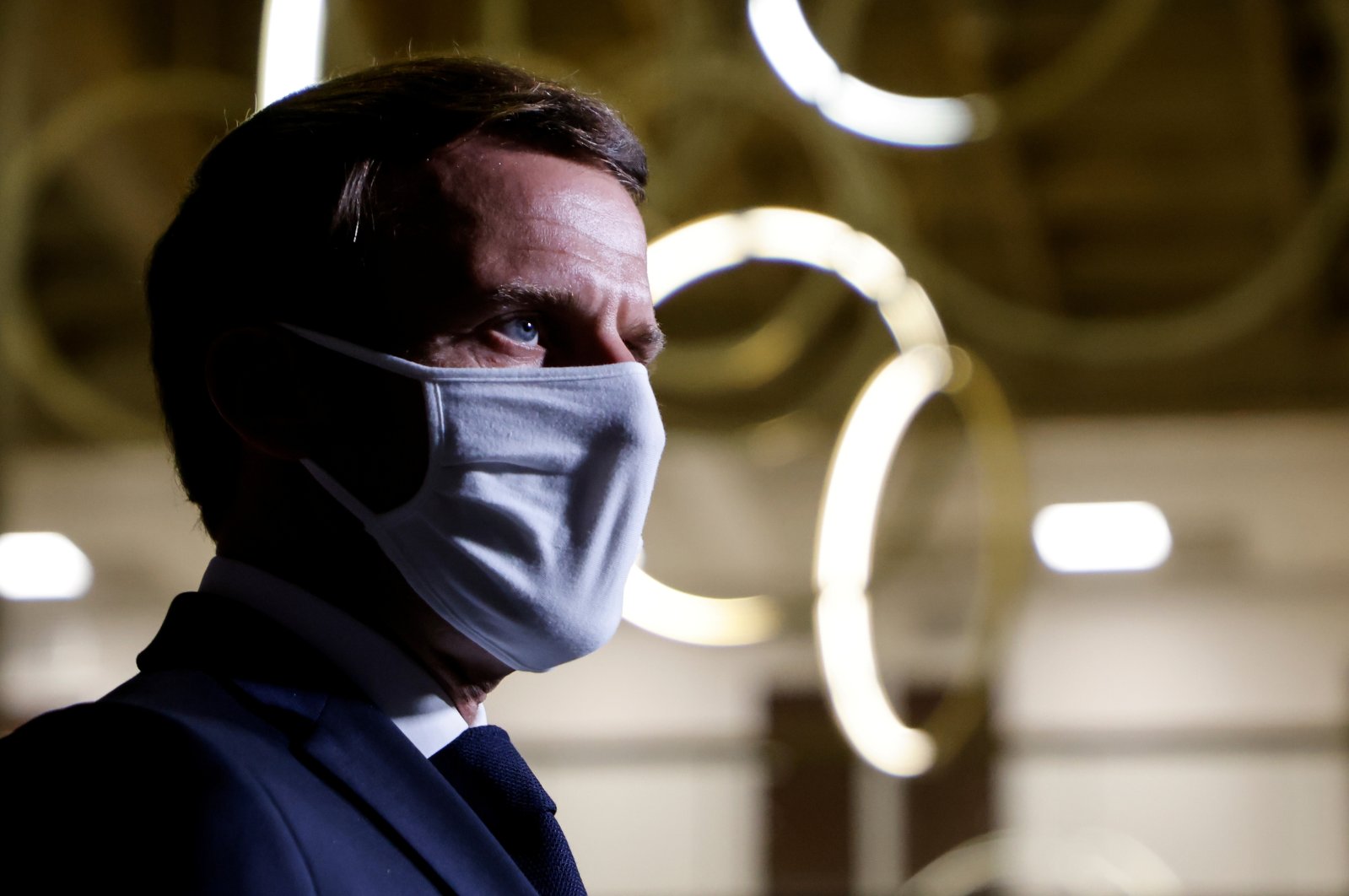 French President Emmanuel Macron delivers a speech at the end of a visit about the fight against separatism at the Seine-Saint-Denis prefecture headquarters in Bobigny, near Paris, France, Oct. 20, 2020. (Reuters Photo)
by DAILY SABAH WITH AGENCIES
Oct 20, 2020 8:46 pm

Two Muslim women become the latest victims of growing anti-Islam sentiment in France after being "stabbed repeatedly" under the Eiffel Tower in Paris. The incident followed President Emmanuel Macron's deeply divisive policies targeting the Muslim community through the extended clampdown on mosques and Muslim organizations.

The victims were identified as Muslims of Algerian background named only as Kenza, 49, and Amel, who is a few years younger. The attack left one victim with a punctured lung after being stabbed six times and the other woman needed surgery on her hands. French police have arrested two female suspects. They are described as being white women of "European appearance," who now face "attempted murder" charges.

With tensions growing in the country as of late, French Interior Minister Gerald Darmanin said Wednesday he had asked local authorities to put mosques in the cities of Bordeaux and Beziers in southwestern France under police protection following threats or acts of violence. France Bleu radio reported on its website late on Tuesday that leaders of the Ar-Rahma Mosque in Beziers had filed a complaint with police following hate messages on Facebook, including a call to set the mosque on fire.

On Tuesday, a French lawmaker warned against a climate of deep-rooted anti-Muslim hatred and generalized suspicion toward the country's Muslims after the murder of a teacher.

Adrien Quatennens, an LFI Party member of the parliament hailing from the Nord Department, appeared on France Info television and in his appearance called for unity in the fight against terrorism. He said he believes that the terrorists' goal is to divide French society and place "a cleavage between Muslims and the rest of the population."

At the same time, Quatennens recognized the importance of fighting against this goal.

"This division must therefore be refused. We must fight against Islamist terrorism but not have a logic of generalized suspicion," he added.

Samuel Paty, a 47-year-old father who taught history and geography at Bois-d'Aulne College in Conflans-Sainte-Honorine in the Yvelines north of the capital, was decapitated on Friday. The teacher, during one of his classes on freedom of expression, had shown controversial cartoons depicting the Prophet Mohammad, according to the reports.

Muslim leaders across France have condemned the murder, stressing that extremists abuse religion for their goals and their actions cannot be justified through Islam. Community leaders expressed their concern that the recent attack would again stigmatize French Muslims and increase anti-Islamic views.

However, Macron, who previously defined Islam as a religion “in crisis,” continues to increase hostility toward Muslims. On Oct. 2, he unveiled a new bill that would extend the ban on religious emblems, which notably affects Muslim women who wear headscarves or veils, for private-sector employees providing public services.

Following the killing of the teacher, Macron said Tuesday that the "Cheikh Yassine Collective," which supports the Palestinian cause, will be shut down as well as several other Muslim nongovernmental organizations.

France has the largest Muslim minority in Europe, with an estimated 5 million or more out of a population of 67 million. Since Macron's inauguration as president in 2017, France has become a less liberal country for Muslims. Many French Muslims say that concerns over Islam have spilled over into stigmatization, pointing to issues such as recent rows about young women wearing headscarves appearing before a parliamentary committee or giving cooking tips on television. Macron described Islam as a "deathly ideology" in the wake of attacks by terrorist groups, although groups such as Daesh, which claimed responsibility for many attacks in France, are rejected by the Muslim community.