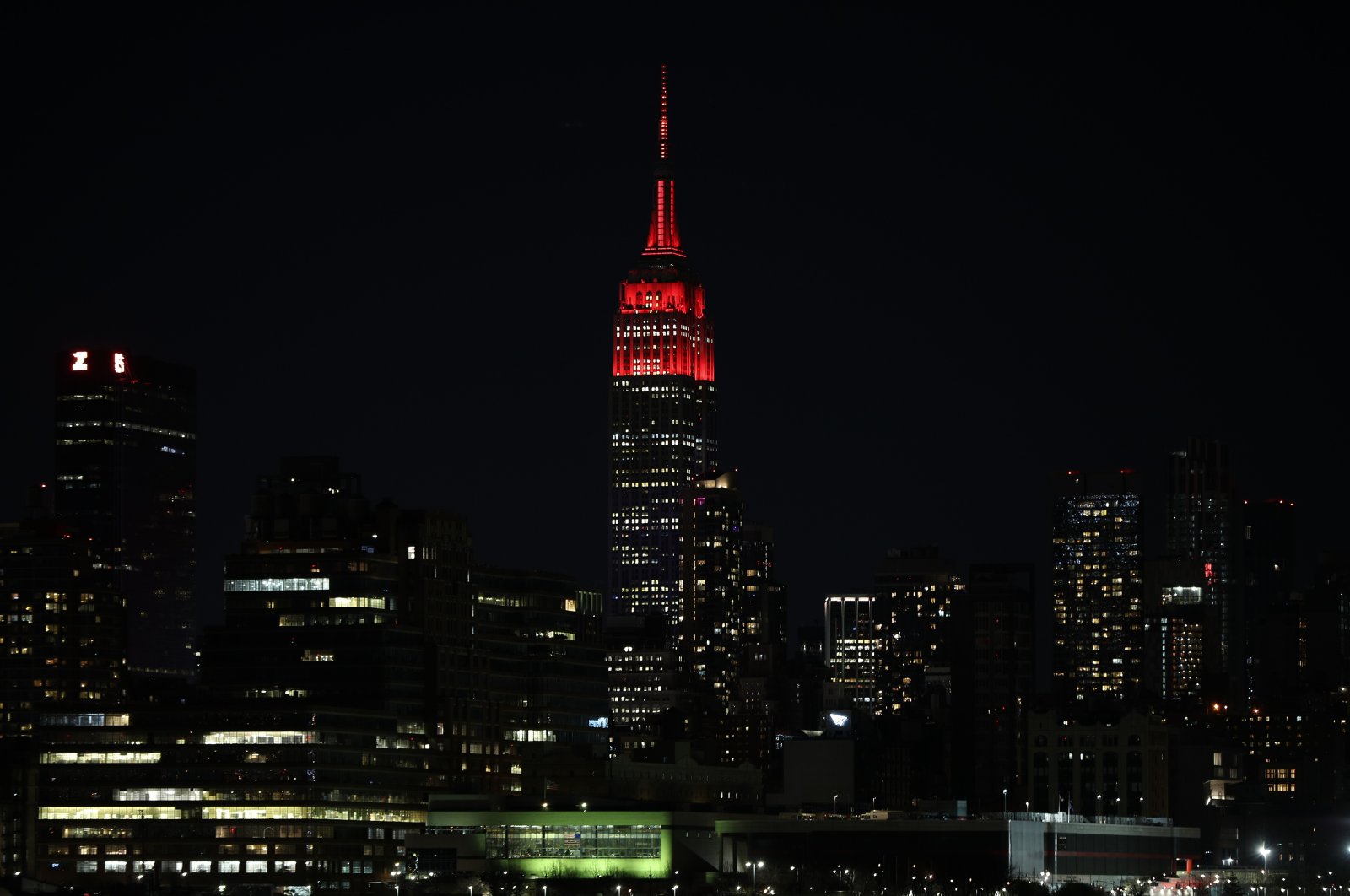 As the number of people diagnosed with COVID-19 worldwide nears 1 million, the West continues to be the hardest-hit by the virus. While the U.S. has over 215,000 cases, Spain’s death toll has surpassed that of Italy’s, the country with the highest patients-to-deaths ratio with 13,000 fatalities

In a mere three months since the new coronavirus first appeared in China’s Wuhan, the number of patients worldwide has jumped to nearly 1 million. Although the disease initially spread within the country from the province of Hubei, it wasn’t long before the first cases in the West were diagnosed.

Coronavirus’ ground zero, Wuhan, is relatively calm these days as Chinese authorities report a slowdown in the number of new cases. However, COVID-19 continues its all-out offensive in the U.S. and Europe.

It only took a month for the new coronavirus to become the third-leading cause of death in the United States. The country's death toll surpassed 5,000 late Wednesday, as the U.S. set a one-day record with 884 people killed in 24 hours. According to data by Johns Hopkins University, the U.S. leads the world in the number of infections with 215,417.

The country’s death toll is still lower than that of Italy and Spain but more than the 3,316 recorded in China, where the pandemic first emerged in December.

As hot spots flare around the country in places like New Orleans, Detroit and Southern California, the nation's biggest city was the hardest hit of them all. New York’s statewide death toll from the coronavirus doubled in three days to more than 1,900 and the wail of ambulances in the otherwise eerily quiet streets of the city has become the heartbreaking soundtrack of the crisis. Bodies are being loaded onto refrigerated, makeshift-morgue trucks by forklift outside overwhelmed hospitals, often in full view of passing motorists. And the worst is yet to come.

“How does it end? And people want answers," New York Gov. Andrew Cuomo said. "I want answers. The answer is nobody knows for sure.”

Speaking to media, a geriatrician from California, Dr. Maria Danilychev, said COVID-19 is now killing 748 people per day in the U.S. Only heart disease (1,774 deaths per day) and cancer (1,641 deaths per day) result in more daily fatalities than the coronavirus, CDC data shows. Its 2017 data shows that more than 647,000 people die from heart disease each year and another 599,000 die of cancer. Accidents – which previously were the third-leading cause of death – account for 169,000 deaths annually, according to the CDC.

U.S. President Donald Trump, who earlier had downplayed the pandemic's impact on the country, said Tuesday the White House is predicting between 100,000 and 240,000 people in the U.S. will die from COVID-19.

Trump called it “a matter of life and death” for Americans to heed his administration’s guidelines.

"This could be a hell of a bad two weeks," Trump said. "This is going to be three weeks like we've never seen before," he added. "We are going to have a couple of weeks that are going to be horrific."

"I want every American to be prepared for the hard days that lie ahead,” Trump said.

He also said that he is considering a plan to halt flights to coronavirus hot zones in the U.S.

"We're certainly looking at it, but once you do that you really are clamping down an industry that is desperately needed," Trump added.

European countries are on the verge of total catastrophe nowadays as the number of infections and fatalities spikes nearly every day.

Italy's notoriously high patients-to-deaths ratio has caused a lot of trouble for the country amid the coronavirus pandemic, in every aspect imaginable. As the country has reported more than 110,000 infections and 13,155 fatalities, its economy has also fallen victim to the invisible enemy. The country’s automotive industry, one of the most established in the world, has been suffering a collapse, with a year-on-year fall of more than 85% in March. Around 28,000 new cars were registered, compared to more than 194,000 in March 2019, the ministry said. There were also around 142,000 used car sales, down 62.3% on a yearly basis. March was the first full month of the novel coronavirus epidemic for the country. A national lockdown was effective for most of the month, forcing the closure of most shops and factories.

On the other hand, Spain set a record in coronavirus-related fatalities, with 950 deaths in 24 hours, even as infection rates appeared to ease. New coronavirus infections rose nearly 8% overnight to 110,238, placing Spain close to Italy, the country that so far has the worst outbreak in Europe. Health authorities say contagion in Spain has dropped from a daily average of 20% until March 25 to less than 12% after that date, more than 10 days after Spaniards were ordered to stay home. The government has acknowledged that the real number of infections could be much higher due to limited testing.

The United Kingdom's death toll from the coronavirus rose 24% to 2,921 as of Wednesday. As of 0800 GMT on Thursday, a total of 163,194 people had been tested, of which 33,718 tested positive, the health ministry said. "Of those hospitalized in the U.K. who tested positive for coronavirus, 2,921 have sadly died," the health ministry said. The United Kingdom has one of the worst official death tolls in the world, after Italy, Spain, the United States, France, China and Iran.

Meanwhile, the number of deaths attributed to the global coronavirus epidemic in Belgium increased sharply and passed the 1,000 mark.

The official toll in the country of 11.4 million has doubled in the space of three days, in part because figures have been updated with a backlog of fatalities from retirement homes.

There have now been 1,011 deaths and 15,348 officially recorded cases since the start of the outbreak, officials said.

World Health Organization (WHO) head Tedros Adhanom Ghebreyesus said there had been a "near exponential growth" in new cases over the past five weeks and a doubling of deaths in the past week alone.

"In the next few days we will reach 1 million confirmed cases and 50,000 deaths," he told a virtual news conference Wednesday, warning that Africa and Latin America needed to be prepared for a wider impact.

“Fears of the exponential spread of the virus – and growing uncertainties about the efficacy of various containment measures – have rocked financial markets worldwide. With market volatility surpassing its peak during the global financial crisis and equity markets and oil prices plunging to multi-year lows,” the United Nations Department of Economic and Social Affairs warned in a report.

The global economy could shrink almost 1% this year due to the new coronavirus, a sharp reversal from the pre-pandemic forecast of 2.5% growth, the U.N. said in the report.

In the best-case scenario, the report said, moderate declines in private consumption, investment and exports will be offset by increases in government spending in the seven major industrialized nations and China, leading to the global growth of 1.2% in 2020.

In the worst-case scenario, it said, the global output would contract 0.9%, “based on demand-side shocks of different magnitudes” to China, Japan, South Korea, the United States and the European Union as well as a 50% decline in oil prices.

This scenario “assumes that wide-ranging restrictions on economic activities in the EU and the United States would extend until the middle of the second quarter,” the report said.

“A sharp decline in consumer spending in the European Union and the United States will reduce imports of consumer goods from developing countries,” the report added. “In addition, global manufacturing production could contract significantly, amid the possibility of extended disruptions to global supply chains.”

After first appearing in Wuhan, China, last December, the novel coronavirus has spread to at least 180 countries and territories, according to data compiled by U.S.-based Johns Hopkins University.