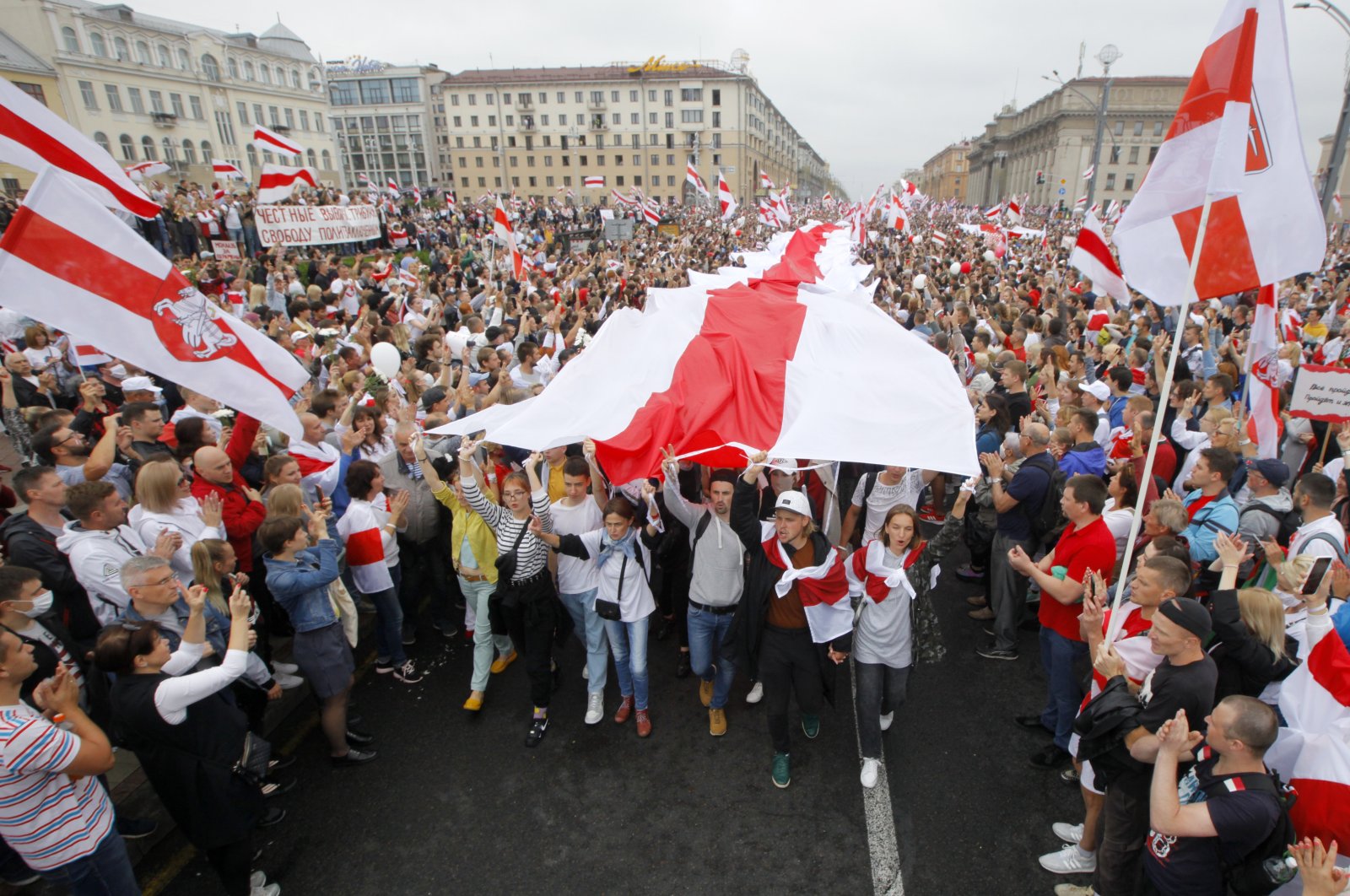 Demonstrators carry a huge historical flag of Belarus as thousands gather for a protest at the Independence Square in Minsk, Belarus, Aug. 23, 2020. (AP Photo)
by Agencies Nov 05, 2020 6:21 pm
RECOMMENDED

A report from the Organization for Security and Co-operation in Europe's (OSCE) election-monitoring organization on Thursday condemned "massive" rights abuses and torture in Belarus and called for a rerun of the country's August presidential polls in which President Alexander Lukashenko claimed victory.

The first major independent report into the election and subsequent crackdown by authorities said human rights abuses "were found to be massive and systematic and proven beyond doubt" and also recommended that the result of the vote should be annulled "due to irregularities at all stages of the process."

Britain's foreign minister also called for new elections in Belarus following the publication of an independent report into the previous vote in August.

"We pushed for this independent investigation and it has exposed the fraud at the heart of the presidential elections and the despicable actions taken by Lukashenko's regime to suppress the Belarusian people," Dominic Raab said in a statement Thursday. "New elections which are free and fair must now be organized, and those responsible for the violence against demonstrators held to account."

On Wednesday the European Union launched a procedure to sanction Lukashenko, his son Viktor and 13 others held responsible for a post-election crackdown in the former Soviet state.

The green light to ban visas and freeze the assets of Lukashenko and the 14 others were given by envoys from the EU's 27 member states and should be confirmed in the bloc's official journal by Friday.

The EU has already imposed travel bans and asset freezes on 40 Lukashenko allies for rigging an election in August that returned him to power and for orchestrating a crackdown on mass protests that have rocked the country since the vote.

Lukashenko has consistently refused to negotiate with opponents, a standoff that raises questions about how long the opposition can continue to bring people into the streets. Although demonstrations on Sundays have typically attracted crowds of 100,000 or more, the most recent Sunday protest saw a turnout of only about 20,000.

About 300 people were arrested in that demonstration, in which police fired in the air and used stun grenades against the crowd. All prominent members at the helm of the opposition's Coordination Council, which was formed to push for a transition of power, have either been jailed or left the country.

Western nations decried arbitrary arrests and other forms of repression in the country during a review of its record at the U.N.'s top human rights body on Monday, with the U.S. ambassador calling on authorities there to halt a "brutal crackdown."

Andrew Bremberg, the U.S. ambassador to U.N. institutions in Geneva, called on Lukashenko to "cease its brutal crackdown against the Belarusian people" and denounced presidential elections as "fraudulent."