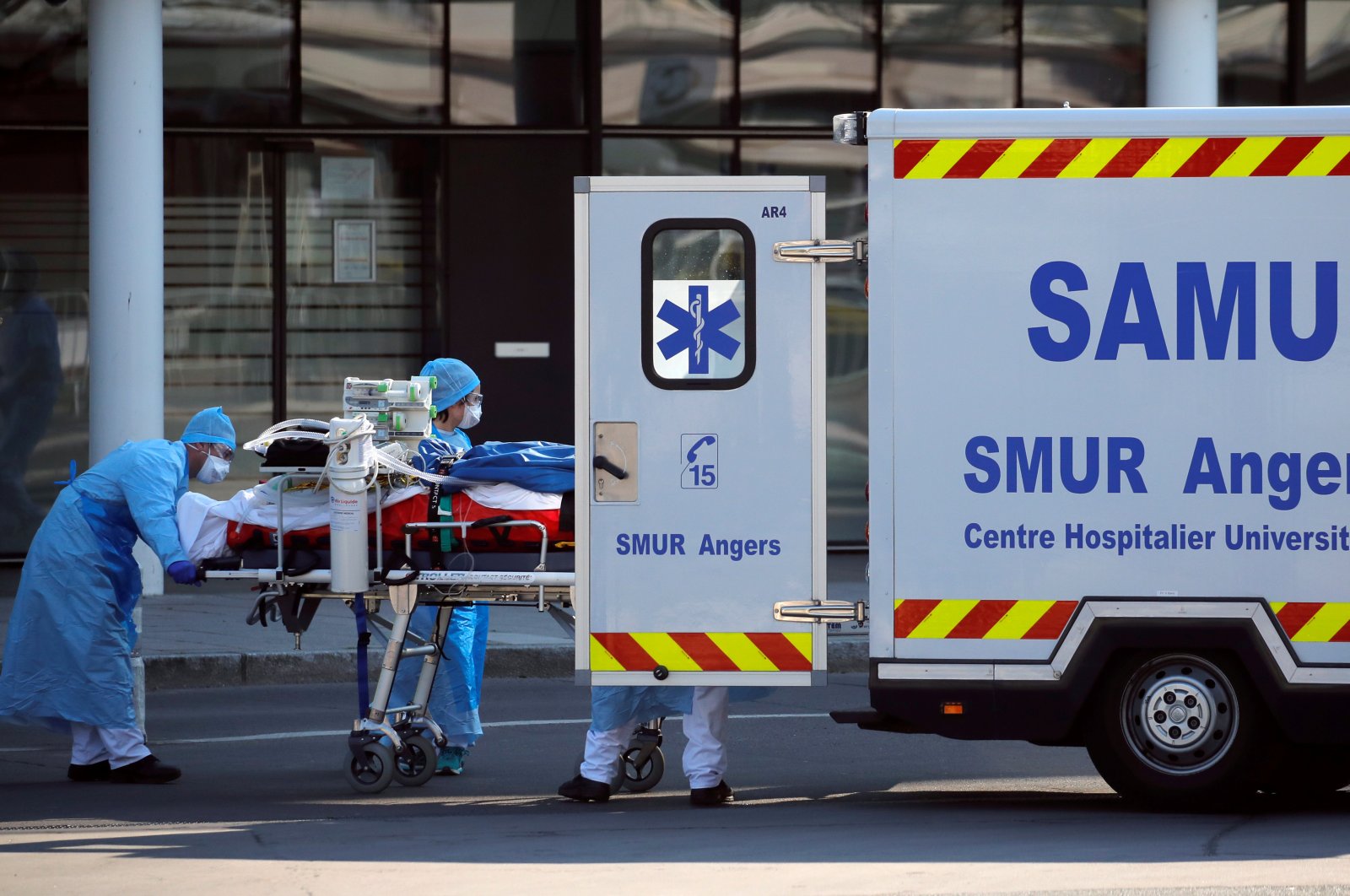 Medical staff move a patient from a special high-speed train to an ambulance during a transfer operation of people infected with COVID-19, from Strasbourg to hospitals in western France, Angers, Thursday, March 26, 2020. (Reuters Photo)
by REUTERS Mar 27, 2020 2:52 pm
RECOMMENDED

A spike in coronavirus cases will put France under huge pressure in coming days, its prime minister said Friday, after the country reported its biggest daily death toll, as officials fear hospitals in and around Paris could be saturated in 48 hours.

Paris and its suburbs now account for over a quarter of the 29,000 confirmed coronavirus infections in French hospitals, with almost 1,300 now in intensive care. Highlighting the disease's brutality, a 16-year-old girl with no underlying health conditions died of the virus on Thursday.

The death toll nationwide stood at 1,696, with signs that the virus is also becoming endemic in the southwest.

"The epidemic wave that is sweeping France is a wave that is extremely high and it is putting the entire care and health system under tremendous strain," Prime Minister Edouard Philippe told reporters.

"The situation will be very difficult in the coming days," he said.

President Emmanuel Macron on March 17 imposed a lockdown to slow the spread of the virus, but doctors say they expect a wave of cases next week after the government pressed ahead with local elections and thousands of people mingled in parks and streets before they were confined at home.

Officials in the Paris area have been scrambling to find more intensive care beds, ventilators and medical staff and spread the load of patients across the capital and its wider suburbs.

France has already increased the number of intensive care units from 5,000 to about 8,000, but doctors say Paris is already at its limit after almost doubling its capacity to about 1,200.

"We will clearly need help in the Ile-de-France (Greater Paris region) because what happened in the east is coming here," Frederic Valletoux, French Hospital Federation president, told BFM TV on Friday.

He was referring to the Grand Est region, where the first major cluster took hold in France and where hospitals are already overwhelmed.

"We will be at the limit of our capacities in 24 or 48 hours. We will need to show real solidarity between regions, hospitals and increase the numbers of patient transfers," he said.

The army has been drafted to transfer some critically ill patients to other cities from the east, while on Thursday the first patients were moved to western France from the east using high-speed TGV trains.

Emergency services have been redistributing patients in the capital to hospitals that are not already overwhelmed.

"If we let hospitals cope by themselves, and let every territory that has been taken by the epidemic cope alone, then we shall head toward a catastrophe," Valletoux said.

Isolation centers were being set up across Paris to allow people with symptoms to be assessed to avoid cramming hospitals.

"This center was set up to welcome patients that are suspected of having the coronavirus and to group patients in a place where we ensure patients are isolated," said one of the attendants at a center in Cergy-Pointoise, in the northeastern Paris suburbs.

Other regions are also starting to feel the pinch with medical staff decrying a lack of equipment, especially masks.

"They are letting us enter the lion's cage without anything to protect ourselves and our patients," Michelle Drouin, a nurse and union official in the southwestern Aude region, told Reuters, stressing that they were having to even replace blouses with plastic bags.

"They are turning us into serial killers. They are putting at risk health professionals and, because they are a vector of the virus, their patients too," she said.