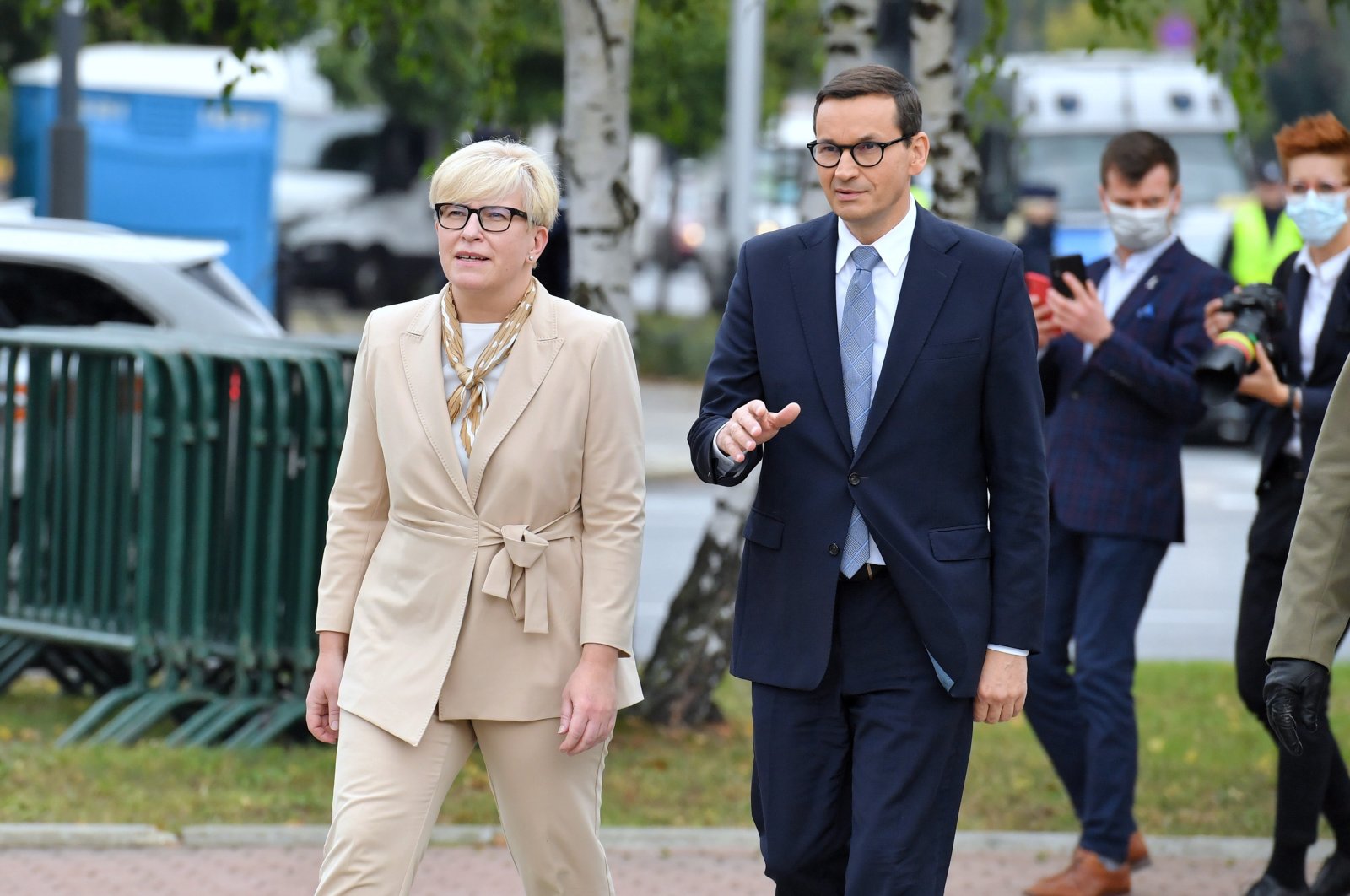 Poland's Prime Minister Mateusz Morawiecki (R) and Prime Minister of the Republic of Lithuania Ingrida Simonyte (L) walk in front of the Monument to the Fallen and Murdered in the East, in Warsaw, Poland, Sept. 17, 2021. (EPA Photo)
by ASSOCIATED PRESS Sep 17, 2021 4:11 pm
RECOMMENDED

Polish Prime Minister Mateusz Morawiecki hosted Lithuanian Prime Minister Ingrida Simonyte Friday in Warsaw to discuss ways of preventing illegal migration and enhancing security on the European Union's eastern border. The prime ministers, as well as members of their governments, held talks about the region’s security in the face of migrant pressure on the two countries' borders with Belarus.

Poland, Lithuania and Latvia have seen a sharp rise in crossings by Iraqis, Afghans, Syrians and Africans from Belarus in recent months. The three EU countries accuse Belarus of pushing the migrants across their borders and say they view that as an element of "hybrid warfare” against the EU.

On Wednesday, European Commission President Ursula von der Leyen said that by pushing migrants at the EU eastern border the "regime in Minsk has instrumentalized human beings," in what she called a "hybrid attack to destabilize Europe.”

She expressed support for Lithuania, Latvia and Poland in their efforts to block these acts. Germany's Der Spiegel magazine said Friday that Germany is stepping up the patrolling of its 460-kilometer (280-mile) border with Poland because of the increased number of illegal crossings and smuggling attempts into Germany, mainly of migrants from Iraq who had crossed into the EU from Belarus.

The migrants issue arose after Western countries imposed sanctions on Belarus for its harsh repression of opposition after authoritarian President Alexander Lukashenko won a sixth term last year in elections that the West and the opposition say were rigged. Simonyte's talks in Warsaw were also to include broader issues, linked to the EU’s future and the situation in Afghanistan, following the Taliban’s taking of control there.

Simonyte was to meet, as well, with the speakers of both chambers of Poland’s parliament, for talks that were to include bilateral matters. Taking part in the bilateral talks were the ministers of defense, of interior matters, of climate, finance, social policy, health, infrastructure and education.