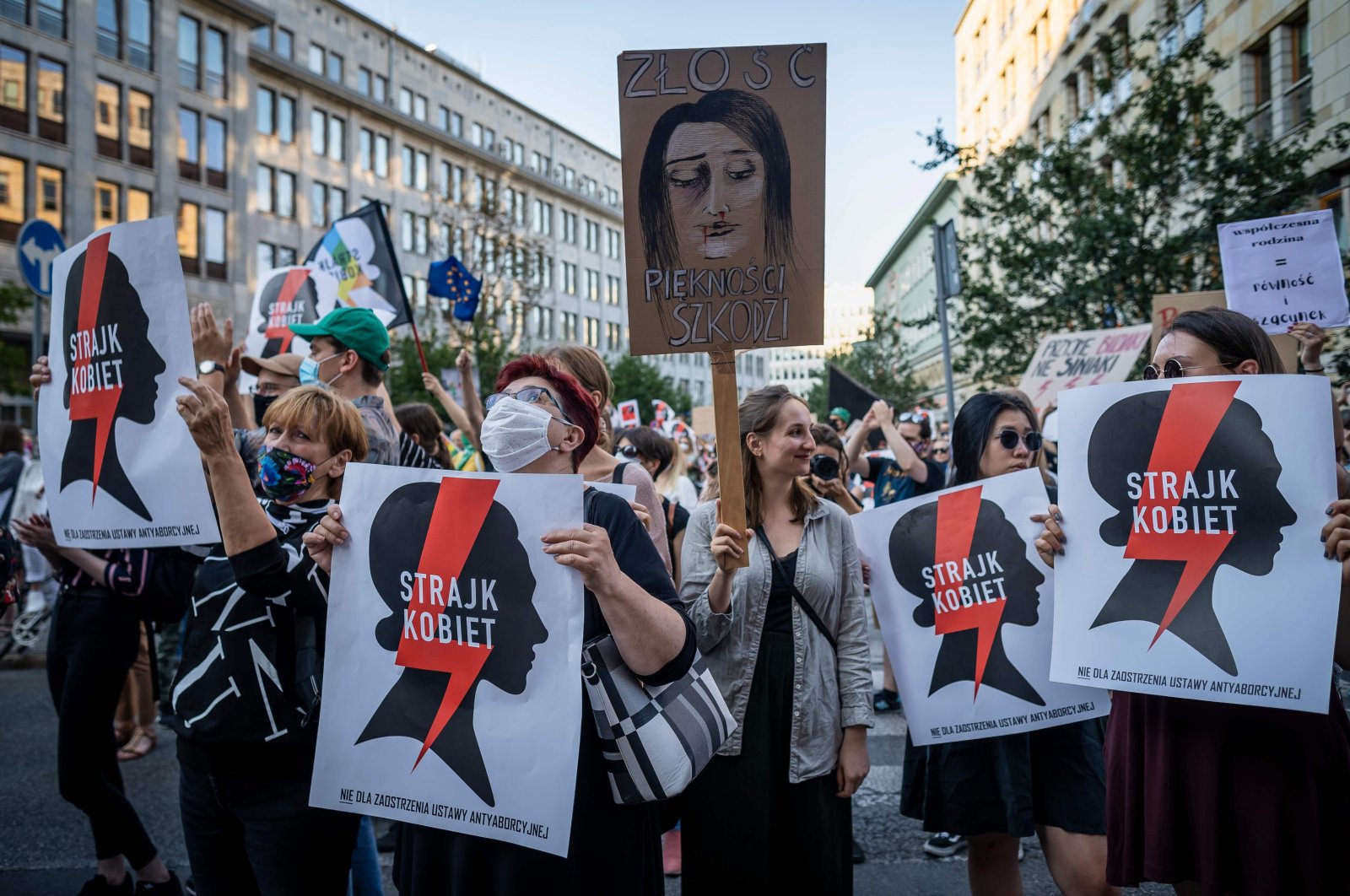 Protesters hold banners reading "Women's Strike" as they take part in a protest against the Polish government plans to withdraw from the Istanbul Convention on prevention and combatting of home violence, in Warsaw, Poland, July 24, 2020. (AFP Photo)
by French Press Agency - AFP Jul 26, 2020 5:10 pm
RECOMMENDED

The Council of Europe said Sunday it is "alarmed" that Poland's right-wing government is moving to withdraw from a landmark international treaty combating violence against women.

Polish Justice Minister Zbigniew Ziobro said on the weekend that on Monday he will begin preparing the formal process to withdraw from the Istanbul Convention, the world's first binding instrument to prevent and combat violence against women, from marital rape to female genital mutilation.

A previous centrist Polish government signed the treaty in 2012 and it was ratified in 2015, when Ziobro called it "an invention, a feminist creation aimed at justifying gay ideology."

The treaty was spearheaded by the Council of Europe, the continent's oldest human rights organization, and its Secretary-General Marija Pejcinovic Buric condemned the right-wing Law and Justice (PiS) government's plan to withdraw.

"Leaving the Istanbul Convention would be highly regrettable and a major step backward in the protection of women against violence in Europe," she said in a statement Sunday.

"If there are any misconceptions or misunderstandings about the convention, we are ready to clarify them in a constructive dialogue."

Around 2,000 people marched in the Polish capital Warsaw on Friday to protest the government's withdrawal plan, some shouting "stop violence against women."

There was also outrage from several members of the European Parliament, with Iratxe Garcia Perez, the Spanish leader of the Socialist group, calling the decision "disgraceful."

"I stand with Polish citizens taking (to) the streets to demand respect for women's rights," he tweeted.

The leader of the EU parliament's Renew Europe group, former Romanian prime minister Dacian Ciolos, tweeted: "Using the fight against the Istanbul Convention as an instrument to display its conservatism is a new pitiful and pathetic move by some within the PiS government."

Fellow MEP and former Belgian premier Guy Verhofstadt said the decision was "scandalous," adding that "violence is not a traditional value."

The Council of Europe emphasized that the Istanbul Convention's "sole objective" is to combat violence against women and domestic violence. The treaty does not explicitly mention gay marriage.

But that has not stopped the backlash to it in Hungary and Slovakia, where the parliament rejected the treaty insisting, without proof, that it is at odds with the country's constitutional definition of marriage as a heterosexual union.

The Strasbourg-based Council of Europe, which is separate from the European Union, has no binding powers but brings together 47 member states to make recommendations on rights and democracy.