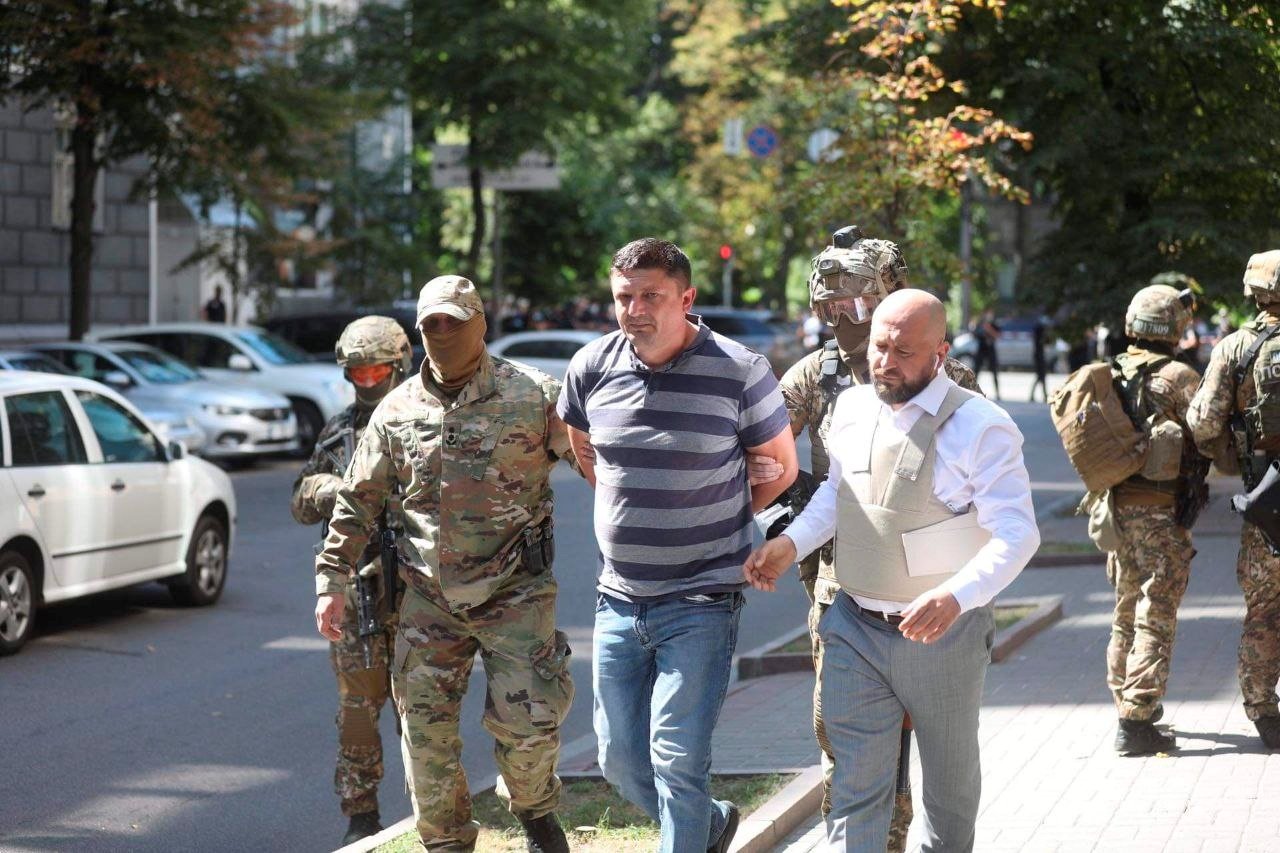 Law enforcement officers detain a man who, according to the head of the National Police, forced his way into Ukraine's main government building and threatened to detonate a grenade, Kyiv, Ukraine, August 4, 2021. (The Ministry of Internal Affairs of Ukraine via Reuters)
by French Press Agency - AFP
Aug 04, 2021 3:34 pm

A Ukrainian war veteran, who threatened to detonate a hand grenade inside a government building in Kyiv on Wednesday, has been detained, police said.

An AFP photographer at the scene saw the middle-aged man being led out of the building by police officers.

Ukrainian police said in a statement that the man, whose name was not released, was detained after negotiations that had lasted around ten minutes.

The man, who described himself as a former mine removal expert, entered the Ukrainian government building in the center of the capital and threatened to set off a grenade.

"I won't leave here alive, I'll go to jail for 10 years," the man said in a video released by Ukrainian media.

Sporting a striped T-shirt and jeans, he was seen holding a white object that looked like a hand grenade. He shouted that the grenade was real.

The ministry spokesperson added that the man was a retired army serviceman who had fought in the war against Russian-backed separatists in the country's east. It was not clear whether he made any demands.

The veteran faces up to 15 years in prison if convicted. The prosecutor's office in Kyiv, which is investigating the incident, said the man was 43 years old.

Ukraine has been battling Russian-backed separatists since 2014 in a war that has claimed more than 13,000 lives.

Ukrainian police chief Igor Klymenko said that the man had been injured twice and suffered a concussion during the war.

Vasyl Oleksyuk, a local lawmaker who knows the detainee and who helped conduct the negotiations, told reporters that the suspect had left the army several years ago and was in a difficult financial situation.

The simmering conflict in eastern Ukraine has led to the proliferation of small arms, and incidents involving weapons are common.