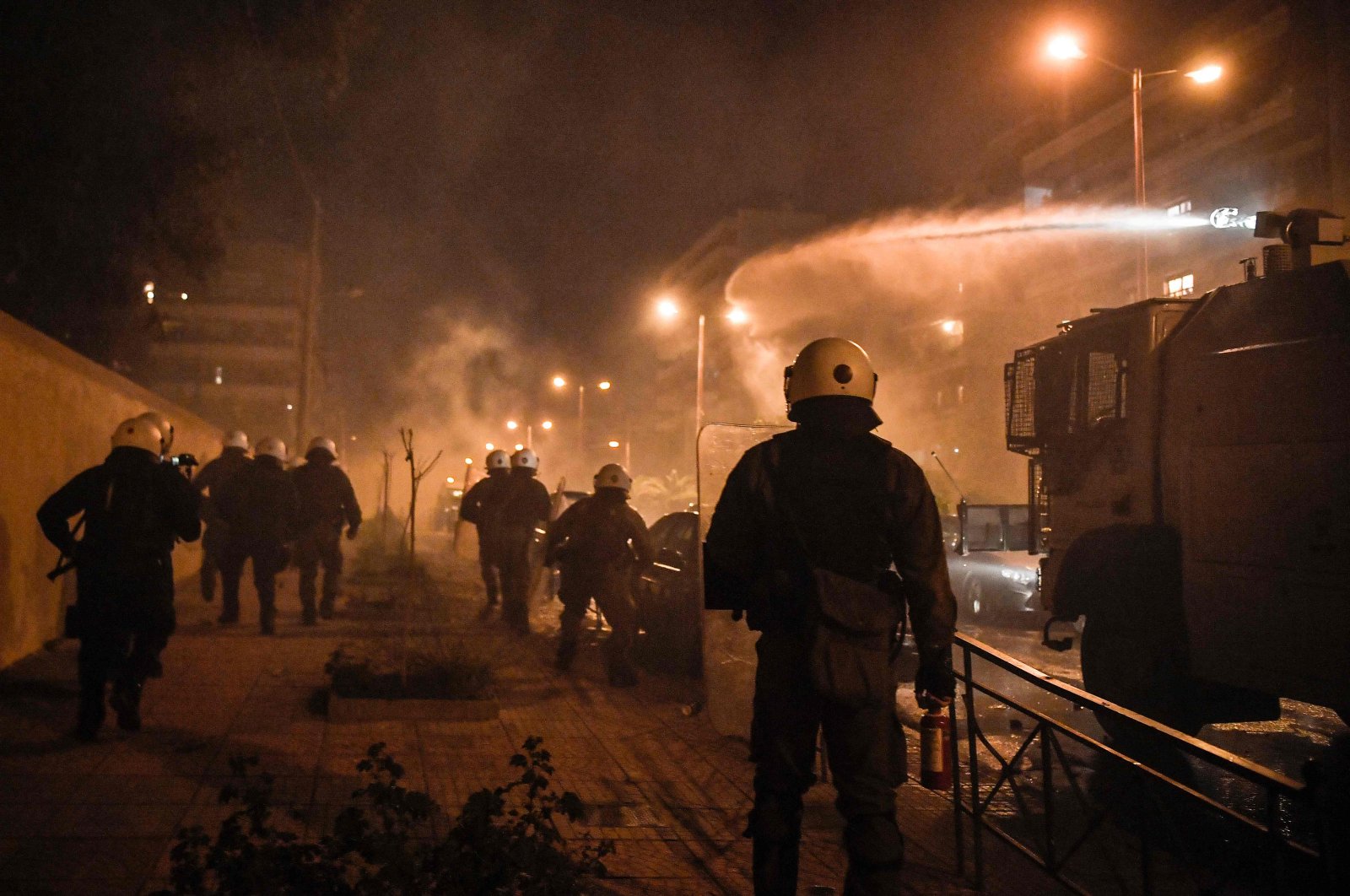 Police use a water cannon during clashes with protesters at a demonstration against police violence in an Athens suburb on March 9, 2021. (AFP Photo)
by Agencies Mar 09, 2021 10:12 pm
RECOMMENDED

Greek police used tear gas and water cannons against rioters in Athens on Tuesday to prevent them from storming a police station after the crowd hurled dozens of petrol bombs at officers.

The violence came during a march by several thousand people in the Athens suburb of Nea Smyrni. Reporters at the scene in the southern Nea Smyrni district said that dozens of parked vehicles were damaged. According to Deutsche Presse-Agentur (DPA), five police officers were injured, including at least one who suffered a head injury, and 16 rioters were detained during a protest in the capital against police violence.

The march to the Nea Smyrni police station was in reaction to an incident on Sunday when police cracked down on those alleged to be breaking pandemic lockdown measures in a square in the Nea Smyrni square, a popular spot for family gatherings.

Video showed a police officer beating a man with a baton, while he was shouting "I'm in pain". Onlookers can be heard in the footage expressing outrage at the police officer behaving this way in front of their children.

Police said they had been called to Nea Smyrni on Sunday after receiving numerous complaints about people violating COVID-19 rules, and that they had been attacked at the scene by "30 people who injured two of our agents" – a claim local residents have denied.

According to the police, around 5,000 people overall had joined the protest against alleged police brutality, some holding banners which read "cops out of our neighborhoods" and "parks are for laughing, not for hearing the words 'I'm in pain."

Prosecutors have ordered a preliminary investigation into the beating, according to a legal source. Police have also opened an internal probe into the officer filmed hitting the man.

An Agence France-Presse (AFP) photographer at the scene of Tuesday's protest said clashes broke out after a group of around 200 masked protesters headed toward the police station in Nea Smyrni, the calm Athens suburb where Sunday's beating had taken place. The demonstrators threw rocks and Molotov cocktails at a police station to which the police responded with tear gas and a water cannon, AFP reported. Around a dozen dustbins were set on fire, prompting firefighters to intervene.

Police said the injured officer had been rushed to the hospital and that some protesters had been arrested before the clashes broke out for possession of Molotov cocktails and iron bars. Journalists and photographers at the scene also came under attack by the protesters.

Greece's Prime Minister Kyriakos Mitsotakis issued a statement strongly condemning the violence at the march Tuesday. He said that "blind rage leads nowhere and urged that "these scenes of violence must be the last.”

"At this point everyone must display restraint and calm,” Mitsotakis said.