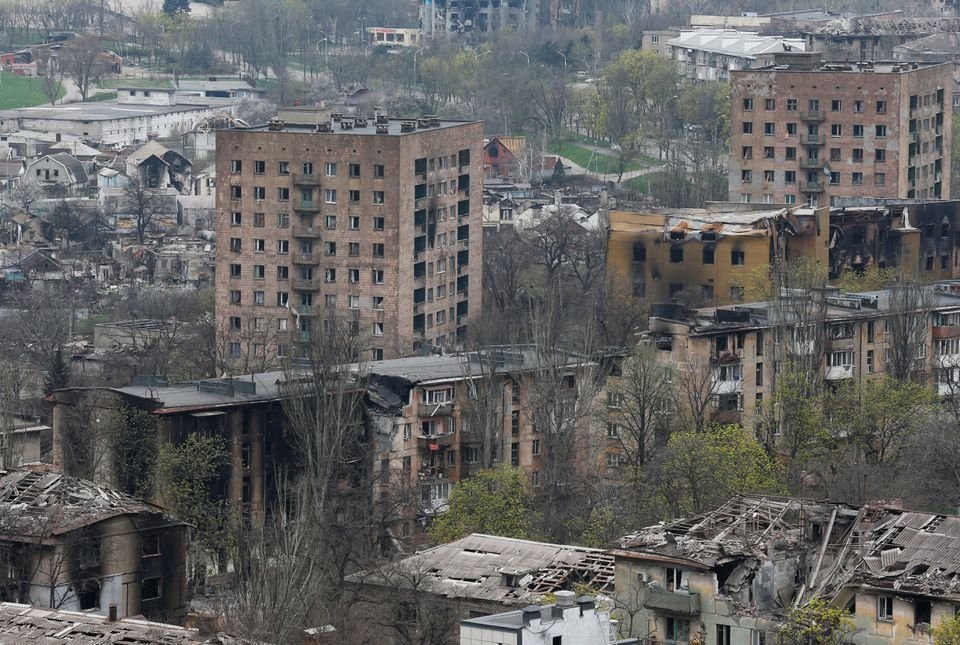 The full capture of Mariupol, which has been besieged by Russian forces for weeks, is a central part of Moscow's plans to cut Ukraine off from the Sea of Azov and forge a land bridge connecting Russian-annexed Crimea to Russia.

Ramzan Kadyrov, the leader of Russia's Chechnya region whose forces have been fighting in Mariupol, had suggested that the vast Azovstal facility, which covers more than 11 square kilometers (4.25 square miles), would be stormed after Ukrainian forces holed up inside ignored Russian demands to surrender.

But Putin gave the order to call off the plan to storm it, saying it was better to save the lives of Russian soldiers and officers and to sit back and wait while Ukrainian forces ran out of supplies.

"I consider the proposed storming of the industrial zone unnecessary," Putin told Shoigu in a televised meeting at the Kremlin.

"I order you to cancel it," said Putin, adding that he wanted it to continue to be securely blockaded instead.

"There is no need to climb into these catacombs and crawl underground through these industrial facilities," he said. "Block off this industrial area so that a fly cannot not pass through."

Putin also called on the remaining Ukrainian fighters in Azovstal who had not yet surrendered, saying Russia would treat them with respect and would provide medical assistance to those injured.

Shoigu had earlier told Putin that more than 2,000 Ukrainian fighters were still holed up in the plant and that it might take three or four days to take control of the facility.

Shoigu told Putin that Mariupol had symbolic importance for Russia because it was what he called the de facto headquarters of the far-right nationalist Azov battalion that Moscow has promised to destroy, adding that Russia had evacuated more than 142,00 civilians from the city.

Shoigu also told Putin that Russia had killed more than 4,000 Ukrainian troops in its campaign to take Mariupol and that 1,478 had given themselves up.

Meanwhile, Ukraine's presidential adviser, Oleksiy Arestovych, said that Russia decided to blockade the besieged Azovstal steel plant in the city of Mariupol because it cannot take it by force. "They physically cannot take Azovstal, they have understood this, they have taken huge losses there. Our defenders continue to hold it," Arestovych said at a briefing.

It "can also be explained by the fact that they have moved part of their forces (from Mariupol) to the North in order to reinforce the troops attempting to fulfill their main objective... advancing to the administrative boundaries of Donetsk and Luhansk regions."

The Azovstal iron and steel works, one of Europe's biggest metallurgical plants, lies in an industrial area that looks out to the Sea of Azov. It houses a multitude of buildings, blast furnaces and rail tracks and has extensive underground facilities too.

Overnight, Mikhailo Podolyak, Ukraine's chief negotiator, had proposed that talks be held inside Mariupol itself on the fate of its last defenders.

"Without any conditions. We’re ready to hold a 'special round of negotiations' right in Mariupol," he tweeted late Wednesday.

Russia sent tens of thousands of troops into Ukraine on Feb. 24 in what it called a special operation to degrade its southern neighbor's military capabilities and root out people it called dangerous nationalists.

Ukraine's last defenders in devastated Mariupol are refusing to surrender, but have appealed for security guarantees, with Russian forces on the brink of taking complete control of the strategically vital city.

Mariupol has been under siege almost since the invasion began, with widespread shelling laying waste to swathes of the port city and forcing most of its 450,000 people to flee.

On Wednesday, Moscow issued another call for the city's defenders to surrender. But that ultimatum passed and Ukrainian forces have stood firm, holing up in the sprawling Azovstal steel plant – also a refuge for up to nearly 2,000 civilians, according to an adviser to the city's mayor. They described a "horrible situation" in the encircled complex, reporting that the trapped civilians – mostly women and children – are without drinking water, food and fresh air.

A Ukrainian commander in the plant issued a desperate plea for help Wednesday, accusing the Russians of failing to follow through on promises to allow civilians safe passage out of the city.

"I want to call upon all the civilized world to join security guarantees," deputy commander of the far-right Azov Regiment, Captain Sviatoslav Palamar, said in a statement, adding civilians inside the plant were "scared due to constant shelling."

"We are pleading so we can collect the bodies of the dead, so the civilians can calmly walk out from Azovstal."

But the corridor appeared to be reopening, with Ukrainian authorities reporting Thursday that four buses had left Mariupol.

"Four evacuation buses managed to leave the city yesterday through the humanitarian corridor," Deputy Prime Minister Iryna Vereshchuk said in a statement on social media, adding that evacuation of women, children and the elderly would continue Thursday.

Vereshchuk also demanded that Russia urgently allow the evacuation of civilians and wounded soldiers from the besieged Azovstal steel plant in Mariupol via a humanitarian corridor.

"There are about 1,000 civilians and 500 wounded soldiers there. They all need to be pulled out of Azovstal today," Vereshchuk said.

Mariupol is the link that Moscow needs to provide a secure connection between territory held by the separatists it backs in eastern Ukraine's Donbass region and Crimea, the peninsula it seized in 2014.

It is also the main port of Donbass, two provinces that Moscow demands Ukraine fully cede to the separatists in what the Kremlin now describes as the war's main objective. After failing to capture Kyiv last month and being forced to withdraw from northern Ukraine, Russia regrouped to launched a major new offensive this week in Donbass, pushing from several directions to encircle Ukrainian troops.

Ukraine said Russian forces had failed so far to completely capture Rubizhne, a Donbass town that has been a focus of their advance. On Tuesday, Ukraine said the Russians had captured neighboring Kreminna.

British military intelligence said Russian forces were keen to demonstrate significant success by May 9, the anniversary of the allied victory in Europe in World War II.

U.S. President Joe Biden will deliver an update on Ukraine at 9:45 a.m. (1:45 p.m. GMT) on Thursday as he works to complete a new arms package, which is likely to be a similar size to an $800 million one announced last week, a U.S. official said.