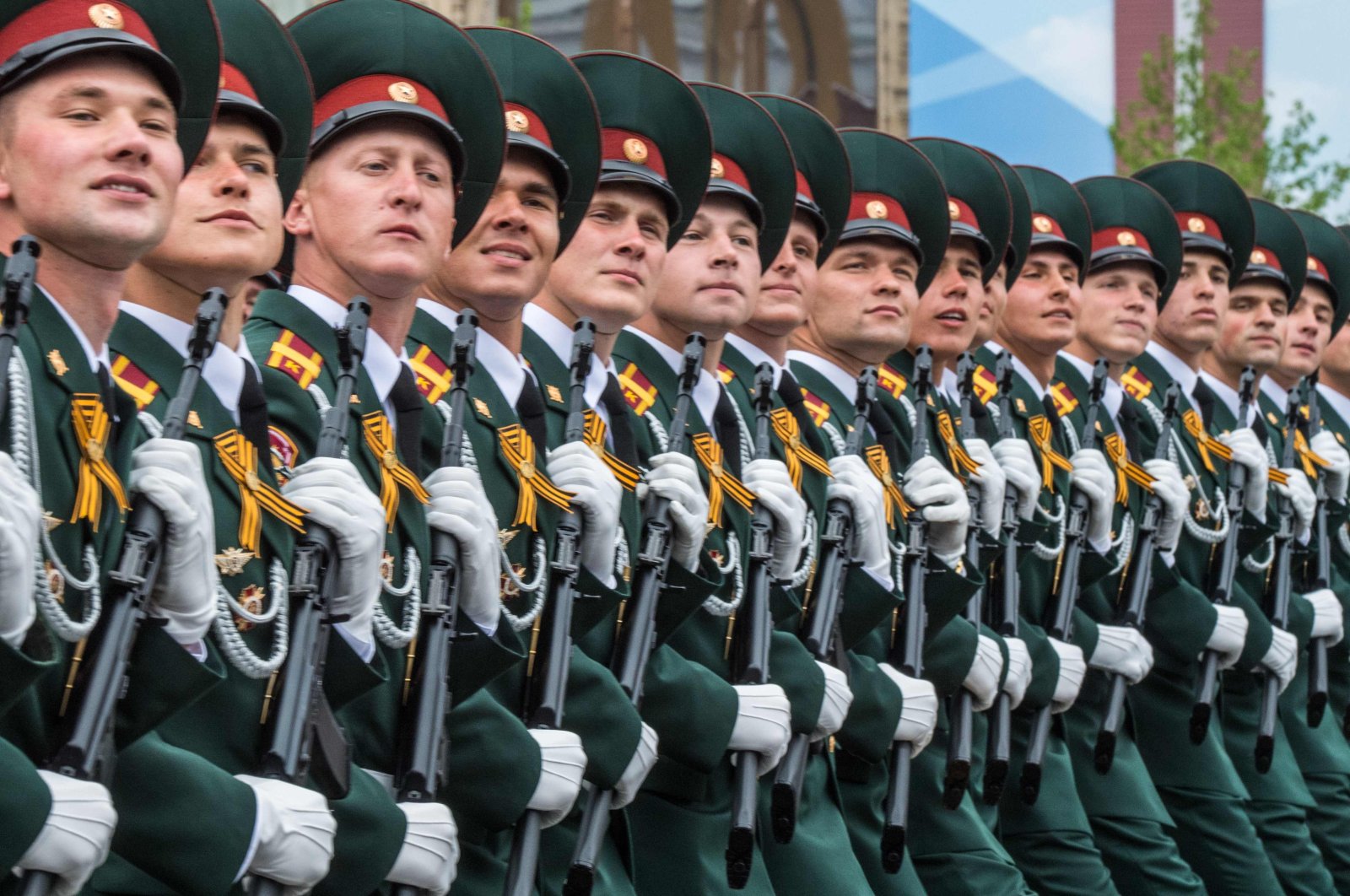 This May 9, 2019, file photo shows soldiers march through Red Square during the Victory Day military parade in downtown Moscow, as Russia celebrates the 74th anniversary of the victory over Nazi Germany. (AFP Photo)
by French Press Agency - AFP May 26, 2020 7:22 pm
RECOMMENDED

Russia has passed its peak of coronavirus infections, President Vladimir Putin said Tuesday, ordering a World War II victory parade postponed by the pandemic to be held next month.

The postponement of the May 9 Victory Day parade had been a blow to Putin, who had hoped to gather world leaders to watch troops march on Red Square to celebrate 75 years since the country's defeat of Nazi Germany.

But with the number of new coronavirus cases declining steadily, Putin told Defense Minister Sergei Shoigu to reschedule the parade for June 24.

"According to experts, the peak can be considered passed," Putin told Shoigu in a video link-up.

"We will do it on June 24, the day the legendary historic victors' parade took place in 1945," Putin said, referring to the first victory parade in Red Square after Germany's surrender to Soviet commanders on May 9.

With leaders including China's Xi Jinping and Emmanuel Macron of France set to attend, this year's parade had been meant to showcase Russia's return to the world stage.

Putin was forced to announce its delay in mid-April as coronavirus infections surged and officials ordered lockdowns across the country.

After peaking in mid-May at more than 11,000 new cases per day, the number of daily infections has dropped below 9,000.

On Tuesday, the country recorded its highest daily death toll of 174 and said a record 12,000 people had recovered from the coronavirus in the past 24 hours.

Russia has the third-highest number of cases after the United States and Brazil, which officials say is due in large part to a massive testing campaign.

Authorities have been easing lockdowns despite the high number of infections, though restrictions remain in place in hard-hit Moscow until at least May 31.

Putin said "strict safety measures" would need to be put in place for the parade.

"The risks for all participants should be minimized, or even better, eliminated," he said.

The leaders of Kazakhstan and Moldova confirmed they will attend the parade.

Another popular event usually held on May 9 — the Immortal Regiment processions that see Russians carry photographs of relatives who died in World War II — will be held on July 26, Putin said.

Russian naval bases will also stage nautical displays for the public that day, he said.

Putin has made clear he believes Russia has overcome the worst of the epidemic. On Monday, he made a rare Kremlin appearance during the lockdown, after working remotely from his residence outside Moscow for the past few weeks.

The pandemic derailed Putin's plans for a triumphant spring, with not only the parade postponed but also an April vote on constitutional reforms that could have paved the way for the longtime leader to potentially stay in power until 2036.

Officials have said they still hope the vote can be held this year but have yet to announce a date.

The government's handling of the virus crisis has come under fire, with critics saying Putin initially appeared uninterested in dealing with the pandemic.

Many slammed his government for refusing to provide Russians with tangible support packages. One survey by independent pollster Levada showed Putin's approval rating fell to a historic low of 59% in April.

Critics said it was inappropriate for Russia to hold celebratory parades in the current circumstances. "An upsurge (of infections) after this is inevitable," tweeted Anastasia Vasilyeva, the head of the Doctors' Alliance, an independent medical workers' union.

"And this comes as people don't have enough money to feed themselves and their children or to pay off loans."