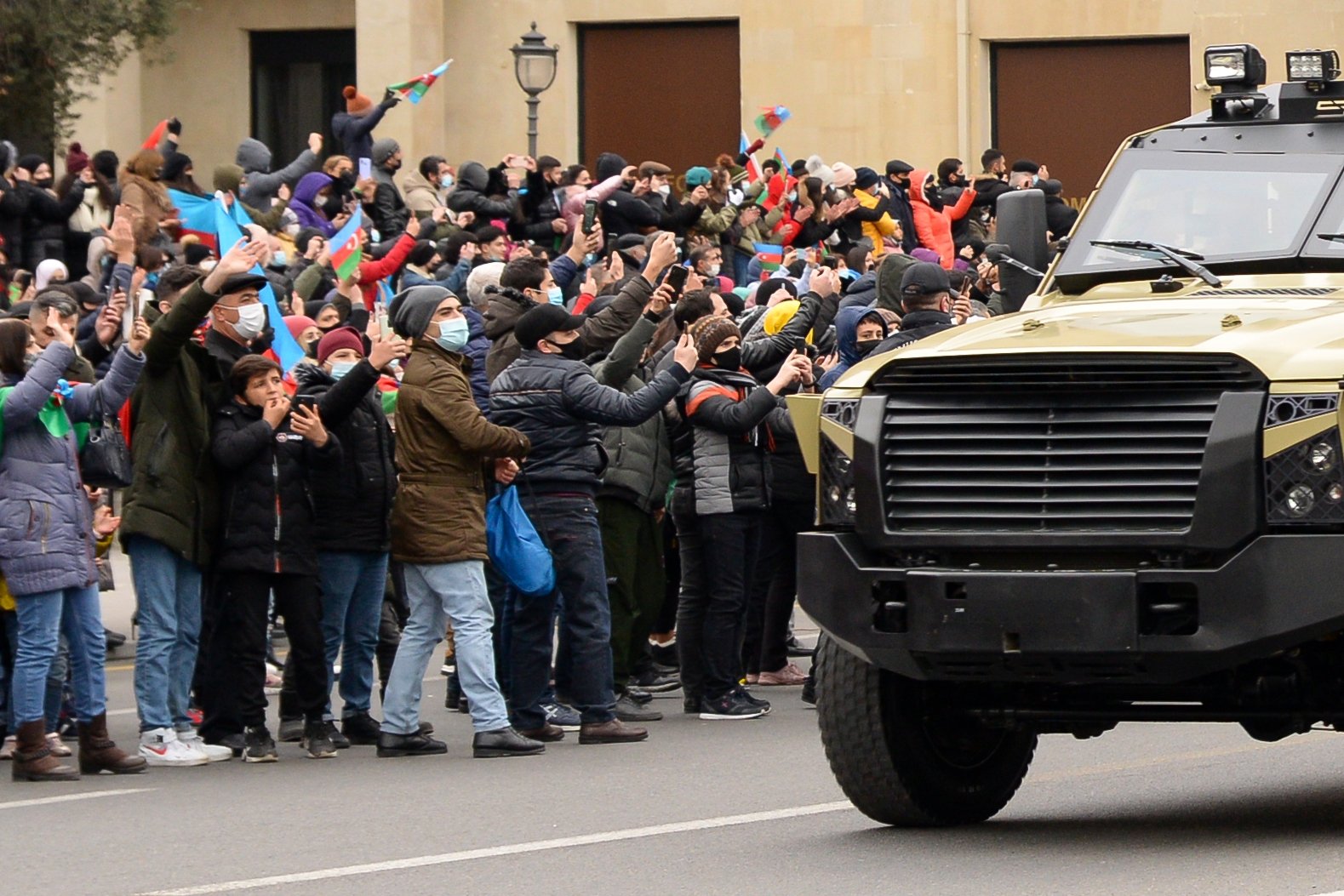 People greet Azerbaijani servicepeople riding in military vehicles during a parade marking Azerbaijan's victory against Armenia in their conflict for control over the Nagorno-Karabakh region, in Baku on Dec. 10, 2020. (AFP)
by Daily Sabah with Agencies Dec 17, 2020 12:44 pm
RECOMMENDED

The recent Nagorno-Karabakh conflict has witnessed the spread of a massive amount of misinformation on social media, mostly through Twitter, a report revealed on Thursday.

According to the most recent report by Teyit (Confirmation), a Turkish organization that examines the credibility of any suspected data, during the 44-day-long conflict, a total of 33 instances of misinformation have gone viral, mostly through eight different social media platforms and 28 websites. The report – prepared by Sayyara Mammadova, Seçil Türkkan and Ali Osman Arabacı – examined suspected information that has been reported to them and/or they came across. In total, the misinformation in question has been spread through 170 different shares. Eight of every 10 shares were spread through social media, reaching 1,723,532 interactions in total. The misinformation was shared in eight different languages, including Azerbaijani Turkish, Armenian, Russian and Turkish.

About 46% of the misinformation was spread through Twitter, which is followed by Facebook with 24% and Instagram with 17%. Telegram, a texting application that is quite popular in Azerbaijan and Armenia, which enabled the spread of only 3% of the misinformation, has a 14% share of the overall interaction by itself, showing the power of the platform in reaching people.

The 28 websites that have taken part in the spread of the misinformation have done so by making fake news based on the fake data. The number of daily visitors to these websites sharing fake news is determined as 27,936,730. This number is more than double the number of the populations of Azerbaijan and Armenia combined.

The report also revealed that the most common type of misinformation during the war was caused by improper association. For instance, 69,9% of the information and footage that are shared with the claim of coming from the Nagorno-Karabakh conflict were actually scenes from other places that were improperly associated with the war between Azerbaijan and Armenia.

"The periods of conflict and war, when the emotions are quite intense, enable a proper environment for the misinformation to spread in a very intense and fast manner. In this report, we wanted to show the 44-day-long conflict's reflections on the digital media through misinformation," Mammadova was quoted as saying by the Demirören News Agency (DHA). She added that the report shows the necessity of a new information ecosystem where media literacy is highly developed.

During the 44-day conflict, Azerbaijan liberated several cities and nearly 300 settlements and villages from occupation.

Turkey and Russia signed an agreement for establishing a joint center to monitor the cease-fire in Nagorno-Karabakh immediately after the peace deal, and the two countries will work together there, President Recep Tayyip Erdoğan said on Nov. 11.

Around 2,000 Russian peacekeepers have been deployed to Nagorno-Karabakh under the terms of the deal and are expected to stay in the region for at least five years.

The Turkish Parliament overwhelmingly approved the deployment of Turkish peacekeeping troops to Azerbaijan. The mandate will allow Turkish forces to be stationed at a security center for one year as part of an accord between Ankara and Moscow to monitor the implementation of the cease-fire, which locked in territorial gains by Azerbaijan.

In this respect, the work of the Turkish troops in the region has already started. Turkey's Defense Ministry said Wednesday that 136 members of the Special Mine Detection and Clearance Team (OMAT) began clearing mined areas in Nagorno-Karabakh that were liberated from Armenian occupation.

"Clearing of mines and handmade explosives continues in (territories of) Karabakh which were heroically and selflessly liberated from Armenian occupation by the Azerbaijani Armed Forces," the ministry said in a statement on its website.

It said the Turkish specialist troops will also train Azerbaijani soldiers in mine detection and clearance techniques and tactics.