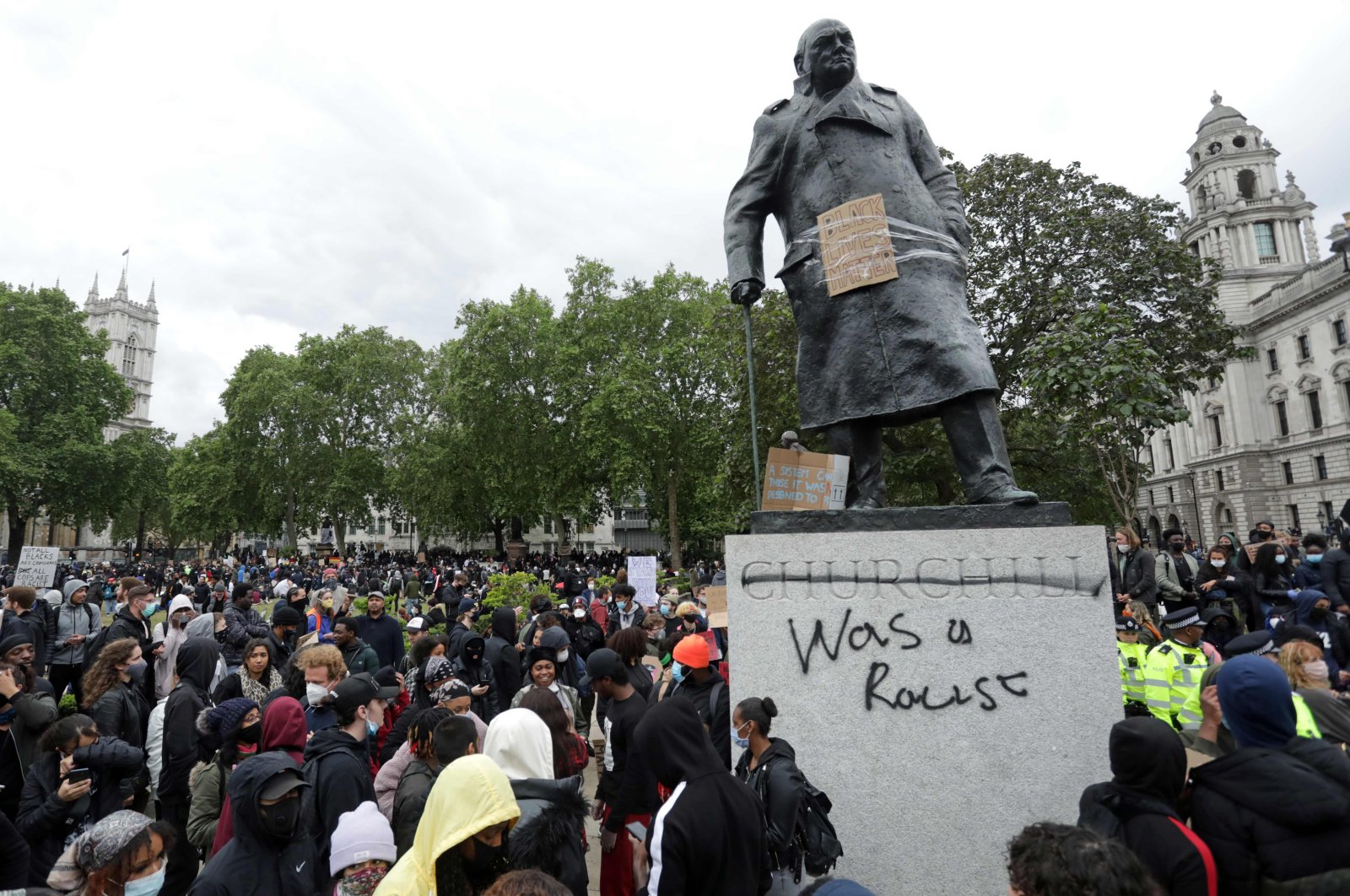 The statue of former British prime minister Winston Churchill is seen defaced, with the words (Churchill) "was a racist" written on it's base in Parliament Square, central London after a demonstration outside the US Embassy, on June 7, 2020. (AFP Photo)
by French Press Agency - AFP
Oct 10, 2020 2:36 pm

British right-wing commentator Darren Grimes is under investigation by police after hosting an interview with a historian that ignited a firestorm of controversy for airing racist views.

In the interview, historian David Starkey had said: "Slavery was not genocide. Otherwise, there wouldn't be so many damn blacks in Africa or in Britain, would there? An awful lot of them survived."

In a video message posted on Twitter Friday, Grimes said he was told by London's Metropolitan Police to attend a voluntary interview this week or face arrest for "stirring up racial hatred."

While conceding he "should have been more robust in questioning Dr. Starkey and more professional," Grimes called the probe "an outrageous abuse of taxpayer cash" and vowed "to fight this all the way."

Investigating interviewers for their subjects' views "will have a real chilling effect actually on free speech and debate in this country," he added.

In a statement, the Metropolitan Police said it was looking into an alleged "public order offense relating to a social media video posted online on 30 June," the date of Starkey's interview on Grimes' YouTube channel.

"The matter is currently being investigated," it said.

Starkey himself issued a lengthy apology a week after the interview, noting that against the backdrop of the Black Lives Matter movement, his comments were "deplorably inflammatory."

But the damage was done, as two universities and a publisher cut their links to the professor, an expert on Britain's 16th-century Tudor era – when the slave trade began to spread in European colonies across the Caribbean and the Americas.

Starkey himself was not placed under police investigation at the time.

Sajid Javid, former Conservative finance and interior minister whose parents emigrated to Britain from Pakistan led a chorus of outrage against the interview over the summer.

But in response to the investigation of Grimes, he urged the police to reconsider.

"David Starkey's comments were appalling. But, the idea that it's appropriate to go after journalists for the remarks of their interviewees is plainly absurd," he said on Twitter.

Karl Turner, an MP of the main opposition Labour party, had a different take in responding to Grimes' video message.

It is not the first time Grimes has attracted the police's interest.

A prominent Brexiteer, he was investigated for alleged violations of electoral spending rules during Britain's 2016 referendum on leaving the European Union. The case was later dropped.