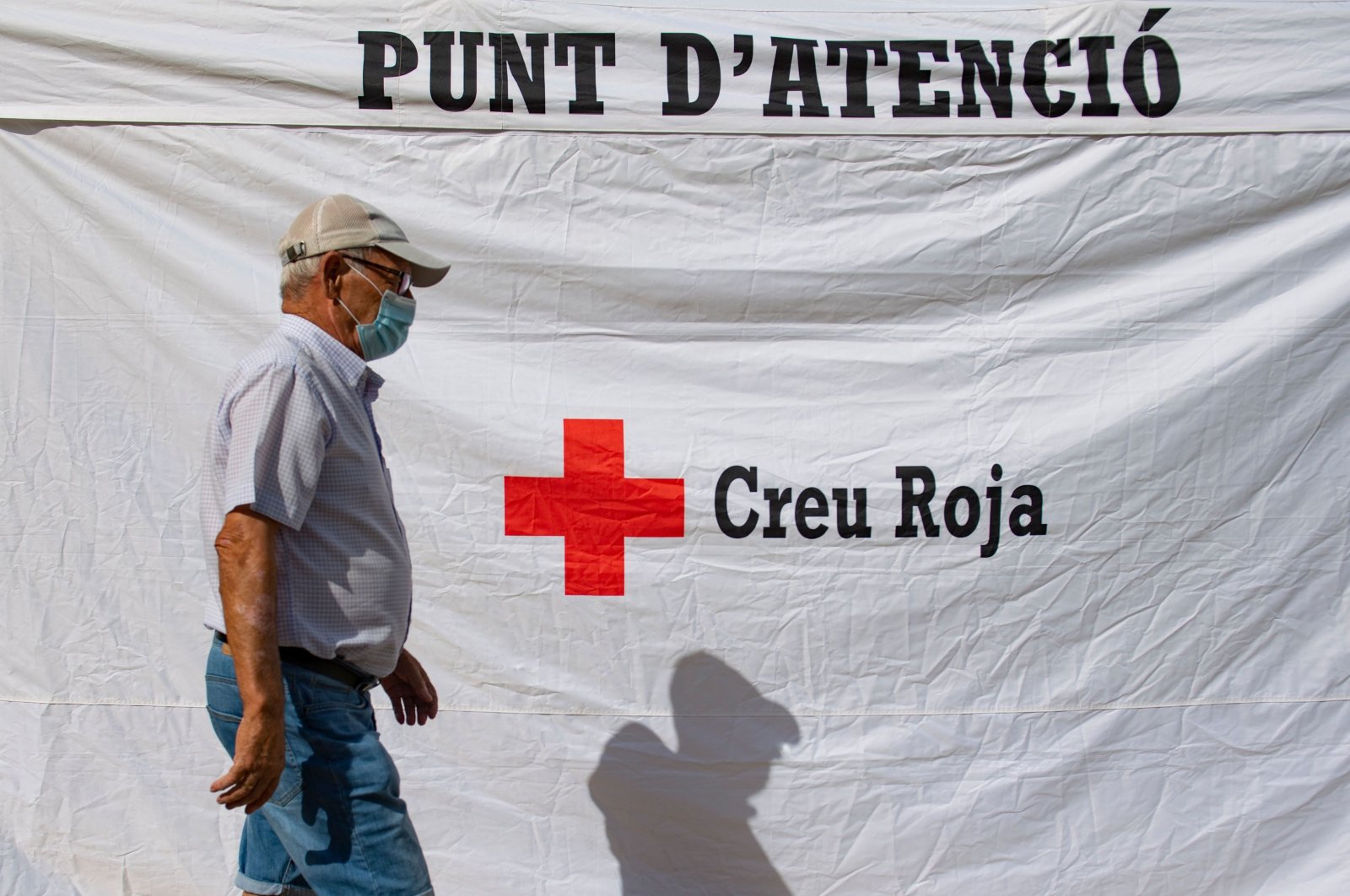 A man walks past a tent outside a medical center where people are tested for the novel coronavirus, Santa Coloma de Gramenet, Catalonia, Spain, Aug. 10, 2020. (AFP Photo)
by Agencies Aug 12, 2020 1:05 pm
RECOMMENDED

As the number of new coronavirus cases increases across Europe, Spain is again struggling with the worst infection rate in Western Europe, with an average of 4,923 new daily cases reported over the past seven days.

Spain has added an average of almost 5,000 new cases per day over the past week, more than France, Britain, Germany and Italy combined. The country currently has 95 coronavirus cases per 100,000 people, compared with 24 in France, 17 in Britain, 13 in Germany and eight in Italy.

The European Union's ECDC health agency urged countries to reinstate some controls to stem new outbreaks in the continent. Authorities in Brussels introduced mandatory mask rules across the Belgian capital following a spike in cases.

Brussels Minister-President Rudi Vervoort’s office said Wednesday that the number of new infections in the city had reached Belgium’s red line of 50 per 100,000 inhabitants on average over the last seven days. Belgium has one of the highest COVID-19 mortality rates per capita in the world. Around 10,000 people have died in a country with a population of 11.5 million.

Germany also recorded the biggest daily increase in new coronavirus cases in more than three months, data showed Wednesday, with the health minister warning of outbreaks in nearly all parts of the country due to holiday returnees and partygoers.

France has reimposed mask-wearing in certain crowded areas and tourist hotspots in the capital Paris. Prime Minister Jean Castex said he would ask the local authorities "to extend as far as possible the obligation to wear masks in public spaces."

Castex added that unless the French public acted individually and collectively, "we expose ourselves to a high risk of epidemic resumption that will be difficult to control." Several French towns and cities have already tightened mask rules, as have parts of Belgium, the Netherlands and Romania.

Italian regions have begun to order new periods of quarantines for people returning from higher-risk European countries like Spain and Greece, in a bid to stem the latest outbreaks of coronavirus.

Over 251,000 people have been infected by the coronavirus and over 35,000 have died in Italy, the first European country to be hit by the pandemic. Over 13,000 people are currently infected.

Health authorities worry that Italians returning from vacations abroad may be bringing home the virus and passing it on during the summer when people are crowding outdoors, on beaches, at festivals or parties.

As the national government studies whether to reissue more stringent restrictions, such as making the wearing of masks mandatory in public, regions are already clamping down. A mandatory 14-day quarantine also begins today in the southern regions of Puglia and Campania for people returning from Spain, Greece and Malta. Sicily is prepared to follow suit, its regional president said.

According to an AFP tally, the number of confirmed infections worldwide since the virus first emerged in China late last year has passed 20.1 million, with almost 737,000 deaths, with that number expected to surpass 750,000 within days.

In the U.S., the world's worst-hit nation, the death toll had risen to 164,480 as of Tuesday evening, with 1,110 more fatalities in the past 24 hours, according to the tracker at Johns Hopkins University. It said the total caseload of infections now stands at 5.14 million.