'Stop the cockroach': Protests spark in Minsk over presidential election 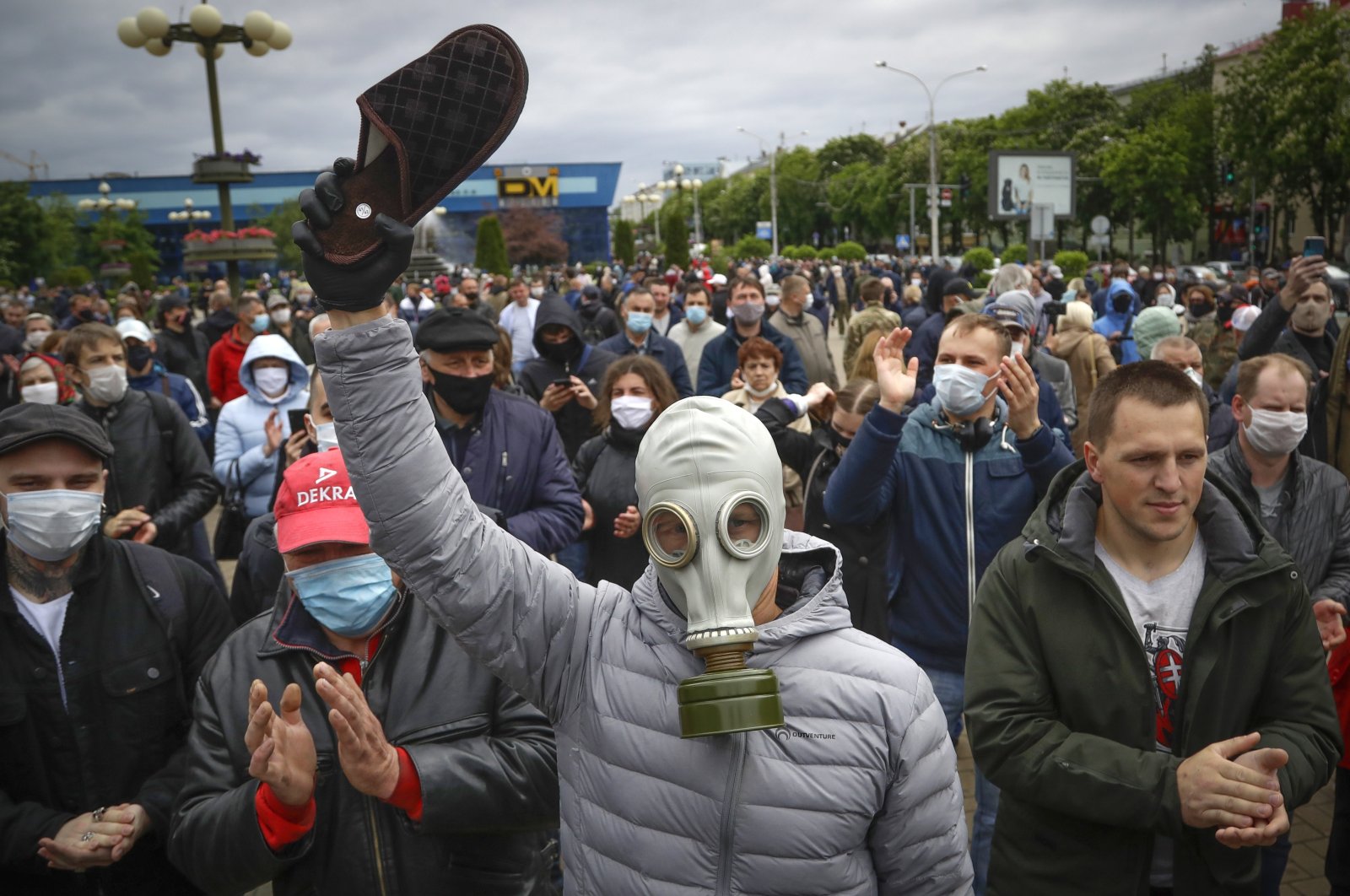 A man, wearing a gas mask to protect against the coronavirus, attends a rally to support for potential presidential candidates in the upcoming presidential elections in Minsk, Belarus, Sunday, May 31, 2020. (AP Photo)
by REUTERS
Jun 02, 2020 5:11 pm

In the Belarusian capital Minsk, a long queue formed outside a covered food market on Sunday as people waited for hours to give their signature to opposition candidates contesting a presidential election in August.

Some carried a slipper, the symbol of a protest movement against President Alexander Lukashenko, comparing him to a cockroach character from a children's fairy tale book that they want to squash.

Such queues are increasingly familiar across Belarus and Lukashenko, a former Soviet collective farm boss, who has tolerated little opposition since taking office in 1994, faces his biggest political challenge in years.

Police have arrested two of his opponents in recent days, but repeating previous crackdowns on dissent could damage his efforts to improve ties with the West at a time when he is distancing the country from Russia, its traditional patron.

But Lukashenko has publicly dismissed Moscow's push for tighter integration as a backdoor annexation and Russia has cut oil supplies and subsidies that have propped up his rule.

Public frustration with Lukashenko's handling of the coronavirus pandemic has combined with grievances about the economy and human rights, reinvigorating opposition to his rule.

To challenge him on Aug. 9, candidates need the signatures of 100,000 voters. In Minsk on Sunday, many stood in a line stretching back about 1 kilometer (0.6 miles) to sign up for multiple candidates.

"I would like this action to show that a huge number of people are unhappy with what is happening in the country, are ready to take to the streets and show the authorities that the time has come for change," said Semyon, an engineer.

Lukashenko compared opposition supporters to criminal gangs on Monday and accused them of fomenting unrest akin to the 2014 Maidan protests that toppled Ukraine's Moscow-backed president.

"I want to warn you and everyone who is listening to us that there will be no Maidan in Belarus," he said.

The wife of a blogger, Syarhei Tsikhanouski, is standing as a candidate after her husband was barred from registering. Tsikhanouski was arrested at a protest Friday.

Belarusians are tired of the lack of change, Babariko told Reuters, despite Lukashenko's efforts to cast himself as a guarantor of stability.

"The behavior of the authorities during the coronavirus pandemic period was the last trigger that showed complete disrespect," he said.

RISKS OF GOING TOO FAR

Lukashenko, 65, resisted calls for a lockdown or social distancing measures and suggested remedies such as vodka or saunas.

Belarus had 44,255 official coronavirus cases and 243 deaths as of Tuesday.

"The authorities have enough brute force, but Lukashenko certainly does not want to go too far. He needs to somehow sell these elections to the West," said political analyst Alexander Klaskovsky.

"But if serious protests ensue, Lukashenko has repeatedly shown that as soon as he feels a real threat to his power, he does not stand on ceremony and thinks least of all about the international image, because power is everything for him."

A crackdown on protests a decade ago over alleged election rigging prompted U.S. and EU sanctions. Sanctions now would risk Lukashenko drifting back to Russia.

"For the West, Belarusian independence from Russia is now more important than the problem of human rights," political analyst Valery Karbalevich said.