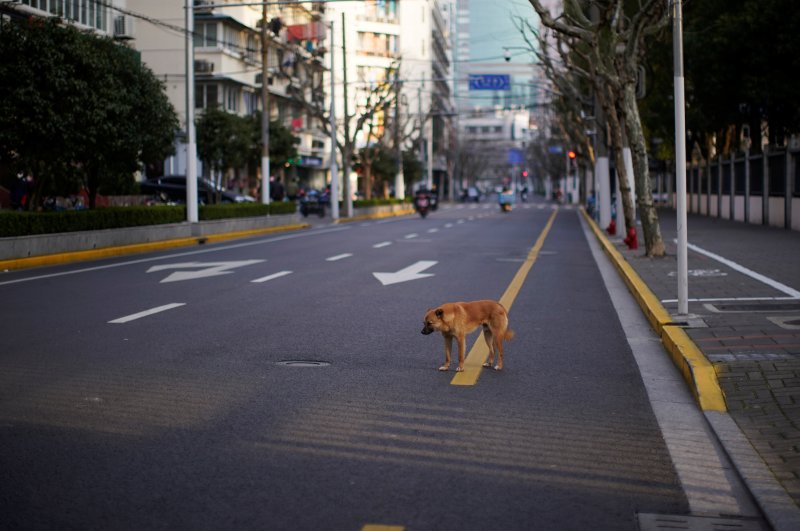 A hungry stray dog walks on an empty street in downtown Shanghai, China, as the country is hit by an outbreak of the new coronavirus, Feb. 22, 2020. (REUTERS photo)
by REUTERS Feb 27, 2020 2:53 pm
RECOMMENDED

Stray animals are being rounded up and rats exterminated as Moscow authorities are taking extra precautions against the new coronavirus, actions that animal rights campaigners decried as cruel and scientifically groundless.

Russia has imposed an array of measures to stop the virus from gaining a foothold in Russia, ranging from restrictions on flights to China and South Korea to visa curbs for Iranian and Chinese citizens.

"We are currently carrying out a large-scale complex (of measures) for the total deratization of the city, catching wild animals, strays," Elena Andreeva, the Moscow head of the Rospotrepnadzor consumer health watchdog, was quoted as saying by the RIA news agency.

She did not explain the reasoning for the moves but said they were part of measures to prevent the spread of the coronavirus.

Hundreds of people have been quarantined across Russia and authorities in Moscow have carried out raids on potential carriers of the virus and used facial recognition technology to enforce quarantine measures.

Barking News, a Russian media outlet that covers news about animals, decried the action against stray dogs and cats as "stupid, unscientific and simply cruel."

It cited a Moscow-based virologist, Nikolai Nikitin, as saying there was no evidence stray dogs and cats could contract the new coronavirus or subsequently transmit it to people.

Moscow used to have a large population of stray dogs and cats, but they have become a rare sight in central Moscow though packs of stray dogs are sometimes seen outside the center. Stray cats are more common.

Three Russian nationals are receiving treatment in Russia after they contracted the coronavirus on a cruise ship in Japan and were subsequently repatriated, authorities have said.

Before that, two Chinese nationals were hospitalized in Russia with the virus, but they have since recovered and been discharged.