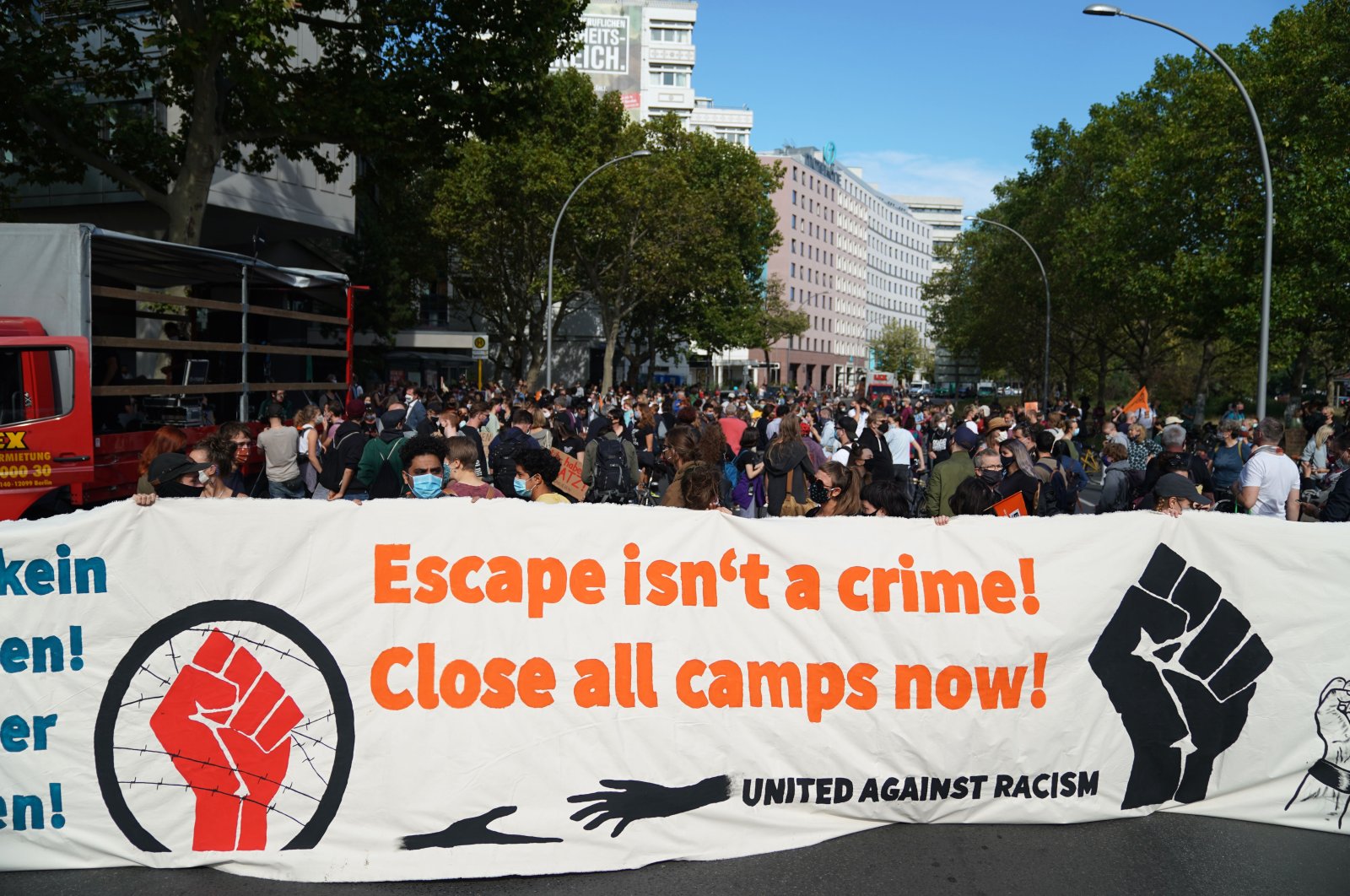 Participants of a demonstration of the Seebruecke organization for safe harbours for refugees from Greece demand the evacuation of all Greek refugee camps, in Berlin, Germany, 20 Sept. 2020. (EPA-EFE Photo)
by Agencies Sep 20, 2020 6:16 pm
RECOMMENDED

Thousands of people marched in Berlin Sunday demanding that the government do more to help migrants stuck in Greece, many of whom have been made homeless since fires ravaged the country's largest refugee camp.

Protesters called on European Union states to allow in migrants stuck in Greek camps before the EU sets out proposals this week on how to help after a fire in one of the camps left 12,000 people without shelter.

The crowd marched through the capital to the landmark Victory Column carrying signs with slogans like "we have space” and "Seehofer, be a Christian” – a reference to Interior Minister Horst Seehofer.

A little girl held a sign saying "let the people in” while a woman waved a placard saying "People are suffering, Fortress Europe looks on – and cuddles up to the right.”

The emergency has highlighted Europe's patchy response to a multi-year crisis that has seen more than a million migrants reach its shores, often onboard flimsy vessels, after fleeing wars and poverty in the Middle East and beyond.

More than 12,000 migrants and refugees fled the fires, which the Greek government says were deliberately set by a small group of Afghan migrants to protest a virus lockdown at the Moria camp. Thousands have slept outdoors on a nearby roadside in the nights since the blazes.

Germany's government said last week it would take in 1,553 migrants – 408 families with children – from various Greek islands who already have been granted protected status in Greece. The move came on top of a decision to take in up to 150 unaccompanied children as part of a European effort.

The weekend demonstrators demanded that Germany do more and that the government not block independent state or municipal efforts to take in refugees themselves.

"I find it unacceptable that we live in one of the richest parts of the world and are somehow scared of 15,000 people and there is an eternal discussion about who will help these people," said demonstrator Oliver Bock.

Despite deep divisions among members, the European Commission is due this week to put forward new proposals on migration. The bloc has failed to agree on a common asylum policy five years after Merkel allowed 1.2 million people seeking protection into Germany.

"I expect the EU Commission to come up with a solid proposal that pulls out all the stops so we have a political agreement on European asylum policy by the end of the year," Seehofer told the paper. He added that he expected no more than 100,000 migrants to arrive in Germany this year.