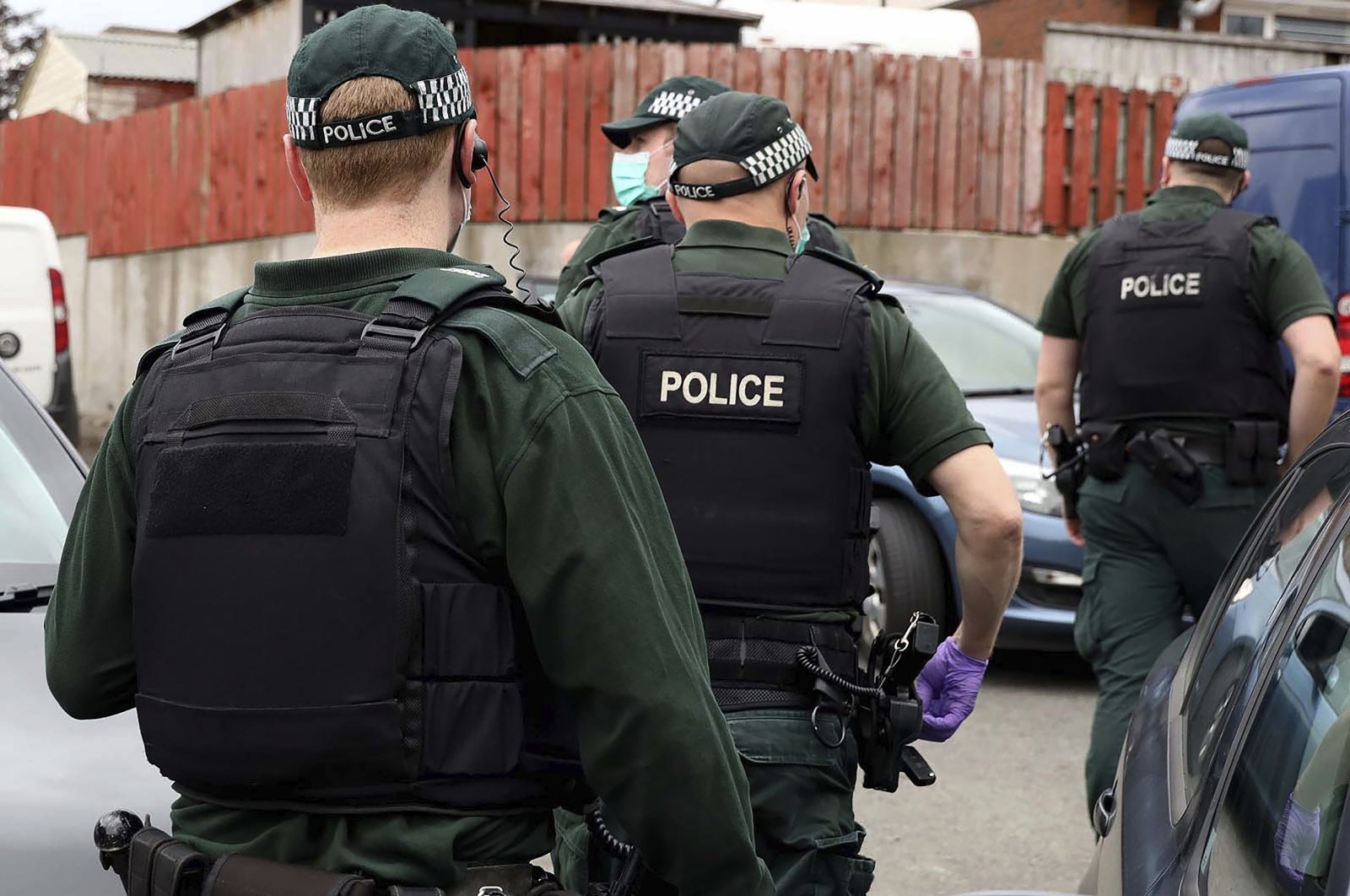 The picture shows police during a raid in Operation Venetic, an investigation on Encrochat, a military-grade encrypted communication system used by organised criminals trading in drugs and guns, July 2, 2020. (AP)
by Anadolu Agency Jul 02, 2020 5:25 pm
RECOMMENDED

The U.K.'s National Crime Agency (NCA) on Thursday said it infiltrated an encrypted communication service that was being used by criminals, arresting hundreds of suspects and seizing tens of millions of pounds of cash as well as weapons and drugs.

The operation, codenamed Operation Venetic, was a "massive breakthrough," according to a statement by the NCA, leading to thousands of criminal conspiracies being uncovered in the U.K.'s biggest-ever law enforcement operation.

The NCA and police have so far arrested 746 suspects and seized over 54 million pounds ($67.5 million) in criminal cash; 77 firearms, including AK-47s, submachine guns, handguns, four grenades and over 1,800 rounds of ammunition; over 2 tons of Class A and B drugs; over 28 million Valium pills from an illegal laboratory; 55 high-value cars and 73 luxury watches.

On top of these gains, the NCA and police prevented rival gangs from carrying out kidnapping and executions in the U.K. by mitigating over 200 threats to life.

Home Secretary Priti Patel said, "This operation demonstrates that criminals will not get away with using encrypted devices to plot vile crimes under the radar."

"The NCA's relentless targeting of these gangs has helped to keep us all safe. I congratulate them and law enforcement partners on this significant achievement," Patel added.

"I will continue working closely with the NCA and others to tackle the use of such devices, giving them the resources, powers and tools they need to keep our country safe," he continued.

The encrypted communications system, named EncroChat, offered a secure mobile phone instant messaging service. It had 60,000 users worldwide, 10,000 of whom were in the U.K. It has now been shut down. The group behind EncroChat operates from outside the U.K.

"The sole use was for coordinating and planning the distribution of illicit commodities, money laundering and plotting to kill rival criminals," the NCA statement said.

The NCA has been working with international law enforcement agencies since 2016 to crack it open.

Two months ago, British partners in France and the Netherlands infiltrated the platform, and the data was shared via Europol, the law enforcement agency of the European Union.

Operation Venetic, the U.K. law enforcement response, saw the NCA and British police monitor those using the system since it was cracked open.

On June 13, EncroChat realized their platform had been compromised and told its members to throw away their phones. The handsets cost around 1,500 euros for a six-month contract, and other than the pre-loaded apps for messaging, they have no other conventional smartphone functions.

The Crown Prosecution Service is leading all the Operations Venetic prosecutions.

Nikki Holland, NCA director of investigations, said: "The infiltration of this command and control communication platform for the U.K.'s criminal marketplace is like having an inside person in every top organized crime group in the country. This is the broadest and deepest ever U.K. operation into serious organized crime."

"Together we've protected the public by arresting middle-tier criminals and the kingpins, the so-called iconic untouchables who have evaded law enforcement for years, and now we have the evidence to prosecute them," she added.

"The NCA plays a key role in international efforts to combat encrypted comms. I'd say to any criminal who uses an encrypted phone, you should be very, very worried," Holland said.