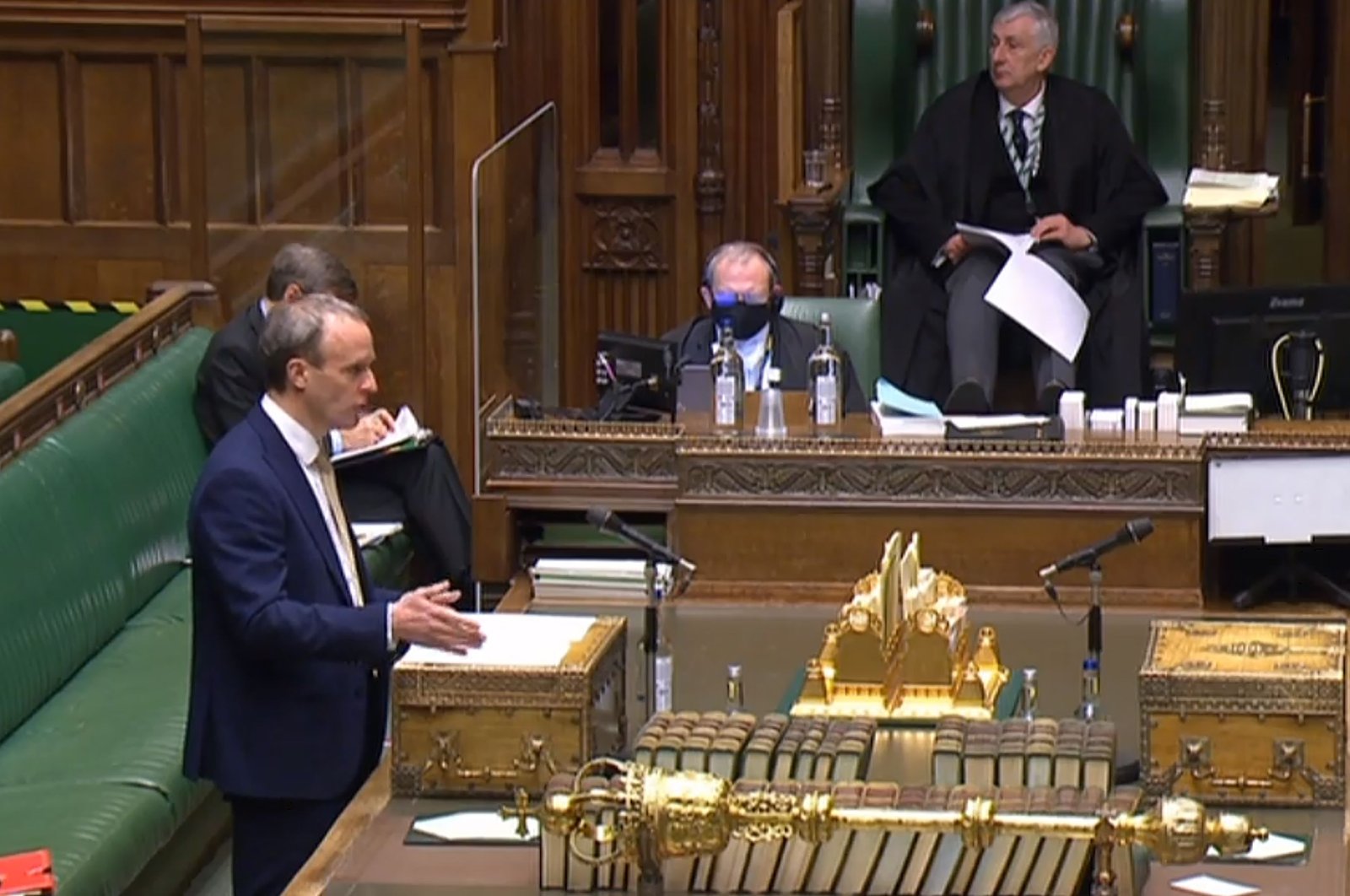 A video grab from footage broadcast by the U.K. Parliament's Parliamentary Recording Unit (PRU) shows Britain's Foreign Secretary Dominic Raab as he makes a statement on trade measures over alleged Chinese human rights violations against its Uighur minority in a hybrid, socially distanced session at the House of Commons, in London, on Jan. 12, 2021. Britain on January 12 accused China of human rights violations against its Uighur minority, as it announced new rules to ban imports of goods suspected of using forced labor. The abuses were "on an industrial scale," Foreign Secretary Dominic Raab told parliament, adding that Britain had a "moral duty to respond." (Photo by - / PRU / AFP) / RESTRICTED TO EDITORIAL USE - MANDATORY CREDIT " AFP PHOTO / PRU " - NO USE FOR ENTERTAINMENT, SATIRICAL, MARKETING OR ADVERTISING CAMPAIGNS
by ASSOCIATED PRESS Jan 19, 2021 7:56 pm
RECOMMENDED

Lawmakers in Britain were set to vote Tuesday on a proposal aimed at preventing the U.K. from making trade deals with any country deemed by the British High Court to be committing genocide.

The amendment to the government’s post-Brexit trade bill, which already passed by a majority in Parliament’s House of Lords, is largely designed to force international action in addressing China’s alleged human rights abuses against the Uighur minority.

Campaigners say that if the law passes, Britain would become the first country in the world to allow genocide cases to be considered in domestic courts.

Under the proposal, minorities alleging they have been the subject of genocide can for the first time apply to the High Court of England and ask for judges to determine if a country trading with the U.K. has perpetrated genocide. If the court makes a preliminary ruling against that country, Britain’s government would be forced to revoke bilateral trade agreements.

The proposal has the backing of all opposition parties and a significant number of rebel Conservatives. Leaders from Britain’s Jewish, Muslim and Christian communities have written a joint letter to the Times newspaper to back the amendment.

Prime Minister Boris Johnson has been facing increasingly vocal calls within his Conservative party for a stronger and more coherent policy on China that counters the country’s rights abuses and violations of international norms.

In a joint letter to lawmakers urging them to back the amendment, however, the opposition Labour Party’s foreign affairs spokesperson, Lisa Nandy, and international trade spokesperson, Emily Thornberry, said voting for the proposal will send a clear message that "when the most serious violations of human rights occur we will not turn away.”

"In particular, we are all gravely concerned about the situation in Xinjiang and the growing body of evidence of the systemic human rights abuses being committed by the Chinese government on an industrial scale against the Muslim Uighur people and other minorities,” they said.

Those backing the measures argue that despite mounting evidence of atrocities targeting Uighurs in the western Chinese region of Xinjiang, the United Nations is highly unlikely to refer Beijing to the International Criminal Court because China, a permanent member of the Security Council, will veto the move.

Johnson’s office said his government had a "proud record” standing up for human rights in China.

"We recognize the strength of feeling but the government doesn’t support the amendment,” his press secretary, Allegra Stratton, said Tuesday.