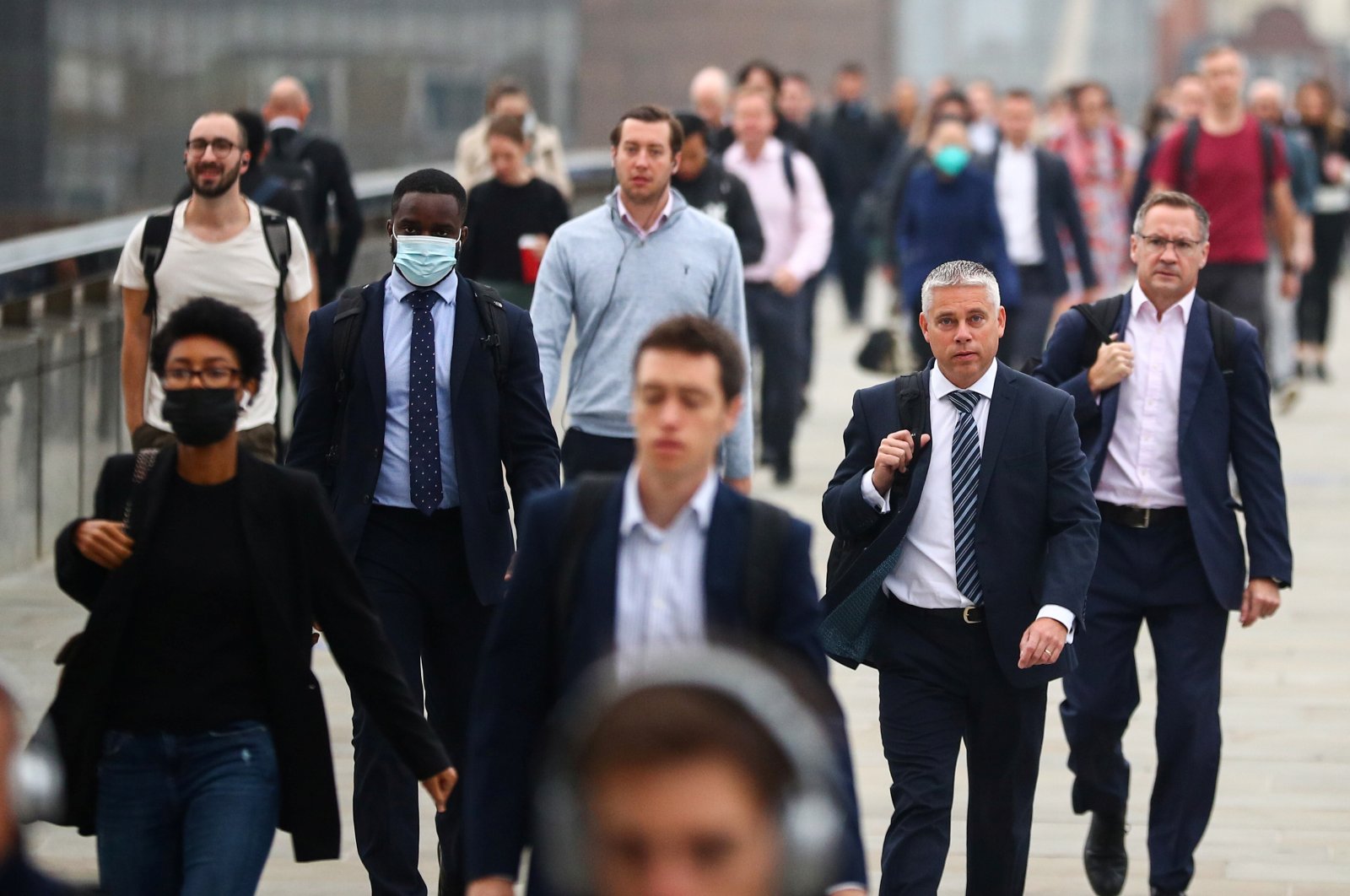 Commuters walk across the London Bridge during the morning rush hour, amid the coronavirus outbreak, in London, Britain, Sept. 21, 2020. (Reuters Photo)
by Agencies Sep 21, 2020 1:44 pm
RECOMMENDED

Britain’s top medical and scientific advisers delivered a sobering assessment of the COVID-19 pandemic to the public Monday amid expectations the government is preparing to announce new measures to control rising infection rates.

The COVID-19 epidemic in Britain is doubling roughly every seven days and if it continues to do so, there will be about 50,000 new cases per day by the middle of October, Patrick Vallance, the government's chief scientific adviser, said Monday.

"At the moment we think the epidemic is doubling roughly every seven days," he said during a televised briefing.

"If, and that's quite a big if, but if that continues unabated ... you would end up with something like 50,000 cases in the middle of October, per day," he said, adding that this would lead a month later to more than 200 deaths per day.

Vallance said this was not a prediction but a way of showing what would happen if the virus continued to spread at the current pace.

Prime Minister Boris Johnson met with ministers over the weekend to discuss how the government will respond to the recent rise in cases, which has pushed infection rates to levels last seen in May. Later this week the government is expected to announce a slate of short-term restrictions that will act as a "circuit breaker” to slow the spread of the disease.

New coronavirus infections rose to a seven-day average of 3,679 on Sept. 17, the highest since May 11.

The government is hoping to keep that number from climbing back to the peak levels of early April when more than 5,000 cases a day were being reported.

While death rates have remained relatively low so far, public health officials warn that deaths are likely to rise in the coming weeks.

The government last week imposed tighter restrictions on communities in northeastern England, where the infection rate first began to rise. Bars and restaurants in those areas must now close between 10 p.m. and 5 a.m. and people are prohibited from socializing with individuals from other households.

The rise in infection rates comes as lawmakers across the political spectrum criticize the government’s testing program. While government ministers tout the record numbers of tests being performed, there are widespread reports of people having to travel hundreds of miles for tests and tests being voided because it is taking labs too long to process them.

An effective testing program is seen as essential to controlling the pandemic because it allows the government to track infections and inform people when they should self-isolate.