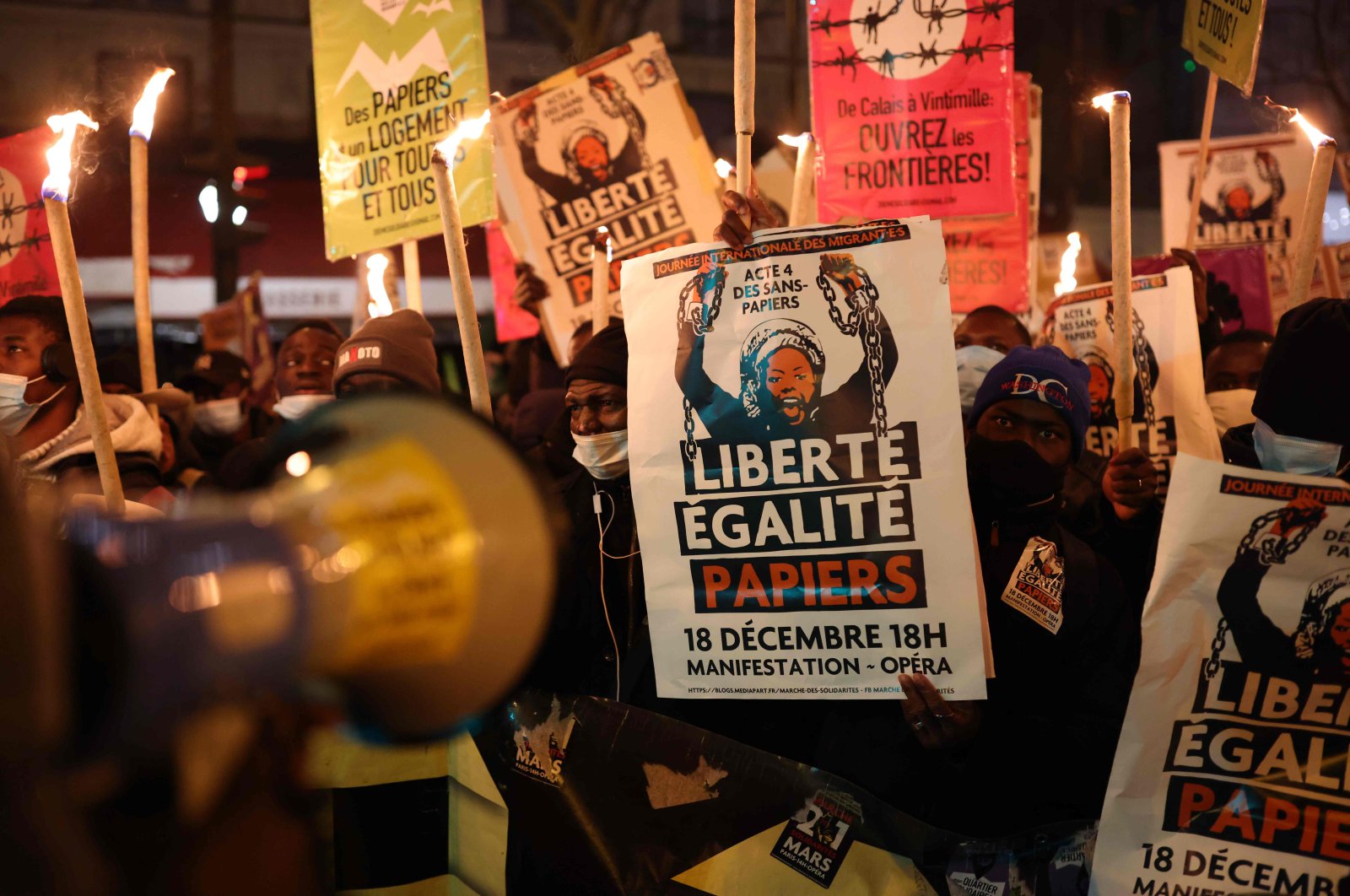 A protester holds a placard reading "Freedom, Equality, Documents" during a demonstration for the regularization of undocumented migrants on the occasion of International Migrants Day in Paris, on Dec. 18, 2020. (AFP Photo)
by Anadolu Agency Dec 22, 2020 8:23 pm
RECOMMENDED

President Emmanuel Macron made a rare admission by saying that white privilege is a fact in France, a country that is often accused of having a discriminatory approach toward minorities from different parts of the world.

In an interview with L'Express Tuesday, responding to a question asking if he considers being a white male under 50 as a privilege, Macron said: "It is a fact. But I note that, in our society, being a white man creates objective conditions that are easier to access my job, to have housing, to find a job, than to be an Asian, black or Maghrebian (North African) man or woman.''

He added that "being a white man can be experienced as a privilege" even if other factors like hard work and merit play a role.

Macron's comments as the head of state of a powerful European country, come at a time when France is struggling to come to terms with racial injustice, and amid global protests on race and gender issues fueled by campaigns such as the MeToo movement and Black Lives Matter. It also validates what rights activists have been decrying for years: in the name of equality, the French laws have rendered minorities "invisible," making them vulnerable to discrimination.

A 1978 law prohibits data collection on "race, ethnicity as well as religious affiliation." As a result, there are no figures on the Muslim, black or minority population nor any separate policies for their socio-economic uplift.

A 2010 government survey on population diversity to examine access to resources by immigrants found "skin color, followed by origin and religion, as the main sources of stigmatization and racism in French society."

Of the 21,000 people surveyed, nearly 95% attributed their racist experiences to their skin color, whereas 80% of people with a North African background attributed it to their origin or nationality, and approximately 35% to their religion or their name.

The same report also said that unemployment rates among immigrants from Maghreb and sub-Saharan Africa are particularly high. Muslims who are estimated to be 5% of the French population – demographically the largest in Europe – are excluded from the job market, have low-incomes and relegated to ghettos like the infamous banlieue — the suburbs on the outskirts of Paris.

French lawmakers who only recognized slavery as a crime against humanity in 2001, voted to remove the word "race" from the country's law books in 2013, as they argued race is a made-up social construct. In 2018, the word "race," which is mentioned only one time in the Constitution, was removed and officially replaced with "sex." The article now guarantees the equality of all citizens before the law, regardless of their origin, sex or religion, instead of race.