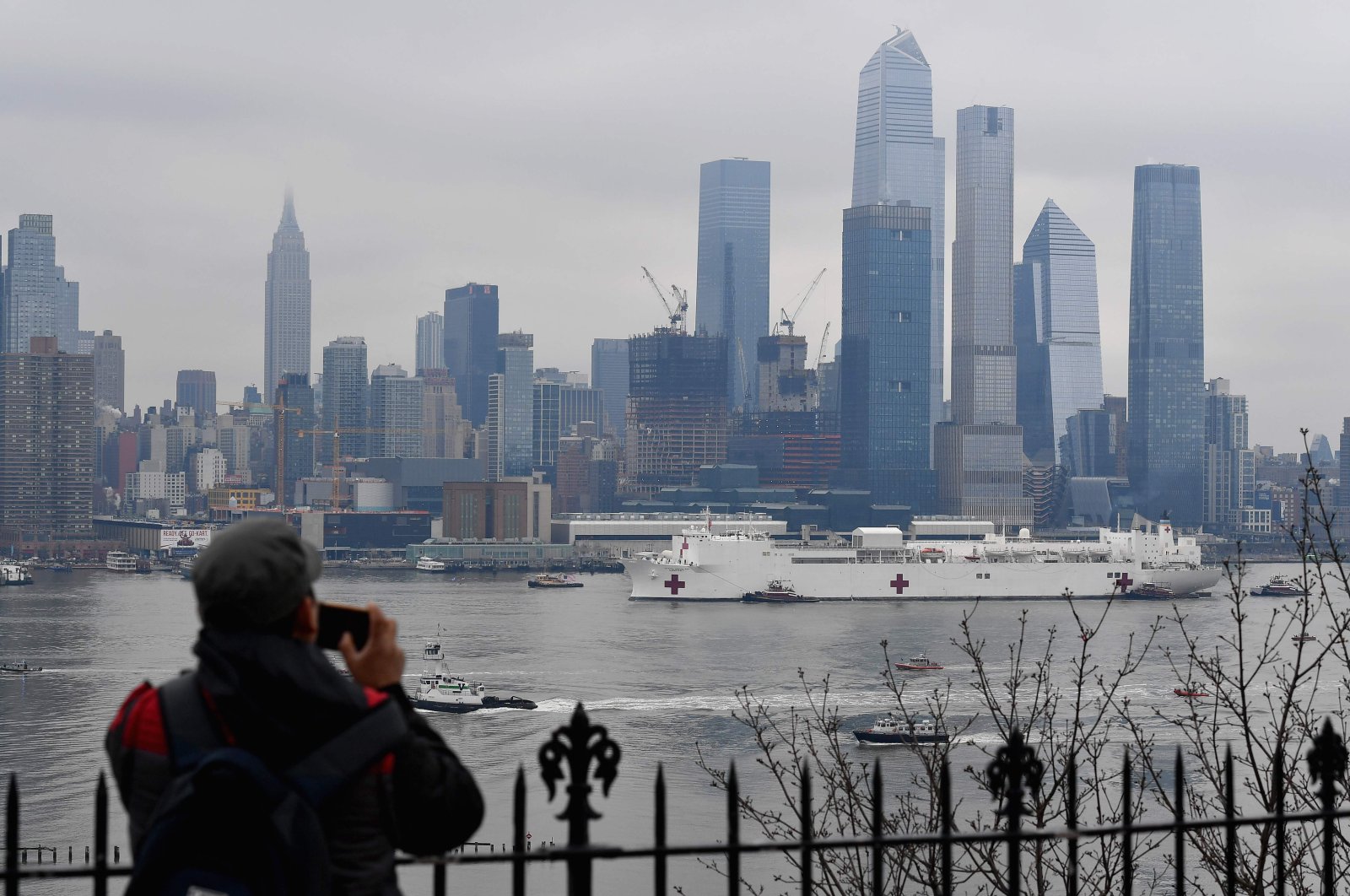 The USNS Comfort medical ship moves up the Hudson River as it arrives on Thursday, March 30, 2020, in New York as seen from Weehawken, New Jersey. (AFP Photo)
by DAILY SABAH WITH AGENCIES Apr 03, 2020 3:41 pm

With strained hospitals and locked-down residents, large metropolises that drive the world economy and culture are now gripped by the COVID-19 disease

Being a “global city” has many economic and cultural advantages and living in one is often a source of pride and wealth for its residents. But is that the case during a raging pandemic? Countries that are the envy and dream of billions of people throughout the world are now the largest frontlines in the battle against the coronavirus, which has infected more than 1 million people globally while deaths due to it, have topped 50,000.

In the metropolises of the Americas, Asia and Europe, health services are being strained to their limits in the fight against the virus, while millions have been left unemployed as businesses and commerce grind to a halt. Here is a closer look at the three alpha cities that are also at the center of their own national outbreaks, and how they are dealing with the pandemic:

‘The city’ at the center of US, world outbreak

New York is inarguably the leading world city of the past century and still regarded as the center of the world in many respects. Nowadays, however, it is the epicenter of the COVID-19 disease with a death toll equal to those of entire countries.

Most U.S. cases have so far occurred in New York City, and the state of New York is America's worst hit with more than 2,373 deaths attributed to the pandemic as of Thursday, up from 1,941 the previous day. It has more than 92,000 cases, followed by New Jersey and California, the states with the second and third-most infections, trailing far behind with nearly 26,000 and 11,100 cases respectively.

Morgues and hospitals in New York City are struggling to treat or bury casualties. Staff at one medical center in Brooklyn was seen disposing of gowns, caps and other protective wear in a sidewalk trash can after loading bodies into a refrigerated truck. One New York funeral home had 185 bodies stacked up – more than triple its normal capacity, with some 60% estimated to be the victims of COVID-19.

To ease the crushing caseload, the city's paramedics have been told they shouldn’t take fatal heart attack victims to hospitals to have them pronounced dead. Patients have been transferred to the Albany area. A Navy hospital ship has docked in New York, the mammoth Javits Convention Center has been turned into a hospital, and the tennis center that hosts the U.S. Open is being converted into one as well.

Gov. Andrew Cuomo has warned that in six days, New York could run out of respirators, machines that assist patients with breathing. He complained that states are competing against each other for protective gear and breathing machines or are being outbid by the federal government. Mayor Bill De Blasio asked New Yorkers to cover their faces when they go outside or are near other people. With hospitals facing a ventilator shortage, on Tuesday he urged veterinarians, plastic surgeons, and other medical professionals with crucial equipment to lend it to those most in need during the crisis.

With New York on near-lockdown, the normally bustling streets of the city of 8.6 million people are empty, and sirens are no longer easily ignored as just urban background noise. Cuomo moved to close the city's playgrounds because of too much crowding, but people can still use wide-open green spaces as long as they stay 6 feet apart. Police are going around in patrol cars, repeatedly blaring warnings at citizens to obey the rules.

Nearly 6,200 New York City police officers, or one-sixth of the department, were out sick Wednesday, including about 4,800 people who reported flu-like symptoms, though it was not clear how many of them have the virus.

The virus hasn't spared any part of the city, but new data shows that a few, poorer neighborhoods in Queens, the Bronx and Brooklyn are getting hit harder than wealthier parts of Manhattan. Residents of one Queens ZIP code south of LaGuardia Airport were roughly four times as likely to have tested positive as people in the gentrified section of Brooklyn that de Blasio calls home. City health officials say families living in smaller spaces because of poverty may have a harder time practicing social distancing.

Japan has so far been spared the kind of explosive surge seen in parts of Europe, the United States and elsewhere, with about 2,800 cases and 73 deaths so far. Its largest city, Tokyo, has reported the highest number of infections in the country with nearly 800 infections – a tiny count compared with a core city population of nearly 14 million. The pandemic has also cost the city the most prestigious sports event in the world. The 2020 Summer Olympic Games were scheduled to start on July 24 but have now been postponed until 2021.

Tokyo Gov. Yuriko Koike said on Friday that Japan's declaration of a national state of coronavirus emergency would send a "strong message" that could help dodge an explosive outbreak. This is her most explicit nudge so far for the government to make the call.

Amid the growing clamor for tighter curbs on people's movements to stem a rising tide of infections, the government has so far been reluctant to pull the trigger, warning of the heavy damage that could ensue in the world's third-largest economy which is already close to recession.

Instead, Prime Minister Shinzo Abe has urged school closures and called on citizens to avoid unnecessary and non-urgent gatherings and outings while preparing to roll out an economic stimulus plan next week – even as he acknowledged the country was barely avoiding a major jump in infections.

"If the country makes a move, it would send a strong message to people," Koike said at a news conference. "If that is coupled with the economic stimulus package being prepared, it would give Tokyo a big boost" in dealing with the epidemic, she said.

Experts are worried about the rise in the percentage of cases that can't be traced. By the end of March, the health ministry had counted 26 clusters of the virus around the country.

Asked what further steps would be taken in the capital if the central government declared a state of emergency, Koike said a Tokyo-style "lockdown" would order the same directions that she has so far been requesting residents to follow.

These include working from home where possible and avoiding outings to bars and nightclubs – advice that many residents have yet to heed, though coffee chain Starbucks and clothing retailer Uniqlo joined a string of other businesses in saying they would shutter dozens of stores this weekend.

In the latest sign of concern about the growing strain the virus is putting on Japan's health care system, the government on Friday told the hardest-hit regions to save hospital beds for severely ill patients, while keeping others with milder or no symptoms at home or in hotels.

Until now Japan has been hospitalizing all coronavirus patients, regardless of whether they are asymptomatic or have mild symptoms. But beds are already filling up in Tokyo, and experts said this week, that they expect similar congestion in other parts of the country.

Koike said Tokyo, for its part, would send people with mild or no symptoms – the majority of the 628 hospitalized with the coronavirus as of Thursday – home or to hotels.

The capital is working with the government to secure accommodations, she said, while Abe has said utilizing facilities that had been set up for the Olympics is also under consideration.

Unlike most parts of the world, the coronavirus shook Britain in a top-down form and seems to only have spared Queen Elizabeth II among top government officials. Her son and primary heir to the throne Prince Charles, Prime Minister Boris Johnson and Health Secretary Matt Hancock all tested positive amid the country’s initial and botched response of “herd immunity,” in addition to a number of ministers and other high-ranking officials.

Johnson said on Friday he was remaining in isolation with mild symptoms of the coronavirus, including a high temperature, seven days after he first tested positive. "Although I'm feeling better and I've done my seven days of isolation, alas I still have one of the symptoms, a minor symptom, I still have a temperature," Johnson said in a video message posted on Twitter.

Meanwhile, the Prince of Wales and Hancock joined Friday the opening ceremony of the world's largest critical care unit in London as part of the fight against the novel coronavirus, which has claimed almost 3,000 lives in the United Kingdom, including more than 1,000 in the capital.

The NHS Nightingale Hospital was set up in London's massive ExCel center in Docklands and has been built in just nine days. It is named after the trailblazing 19th-century nurse Florence Nightingale, who is also a household name in Turkey for her efforts during the Crimean War.

Prince Charles, who stayed in self-isolation for a week after testing positive with the virus, joined the ceremony via video link and said the hospital was "an intensely practical message of hope at this time of national suffering."

Health Secretary Matt Hancock, who caught the virus and recently came out of self-isolation, also attended the opening ceremony. He said the hospital was the "best of efforts, best of NHS and best of Britain."

The hospital has 500 intensive care beds, but its capacity may be extended later to include another 3,500 beds in accordance with the growing need for intensive care as the number of COVID-19 cases rises. It will take intensive care patients with COVID-19 from other London hospitals, which have seen the highest number of cases across Britain.

The new facility equals the size of 10 district general hospitals, and has more than 80 wards, each containing 42 beds. When fully operational, it will require more than 16,000 staff. Hancock praised the NHS, a taxpayer-funded service free at the point of use, which has been struggling in recent years as a result of public spending cuts.

Temporary hospitals are also being built in exhibition centers in Birmingham and Manchester, with a capacity of up to 3,000 beds between them. A third are under construction in Glasgow, and plans are also in place to build two more in Bristol, in western England, and the northern city of Harrogate, offering 1,500 beds.

The death toll in the country was 3,921 as of Thursday, following two days in a row with more than 500 deaths each. A total of 163,194 people have been tested and 33,718 of these were positive, according to the British Department of Health, with one-third of the cases detected in London. Britons have been told to stay at home whenever possible and nonessential shops and services have been shut since March 23, as part of a nationwide lockdown to stem the spread of the coronavirus. However, health officials say the measures will take time to take effect and the death toll continues to mount rapidly.