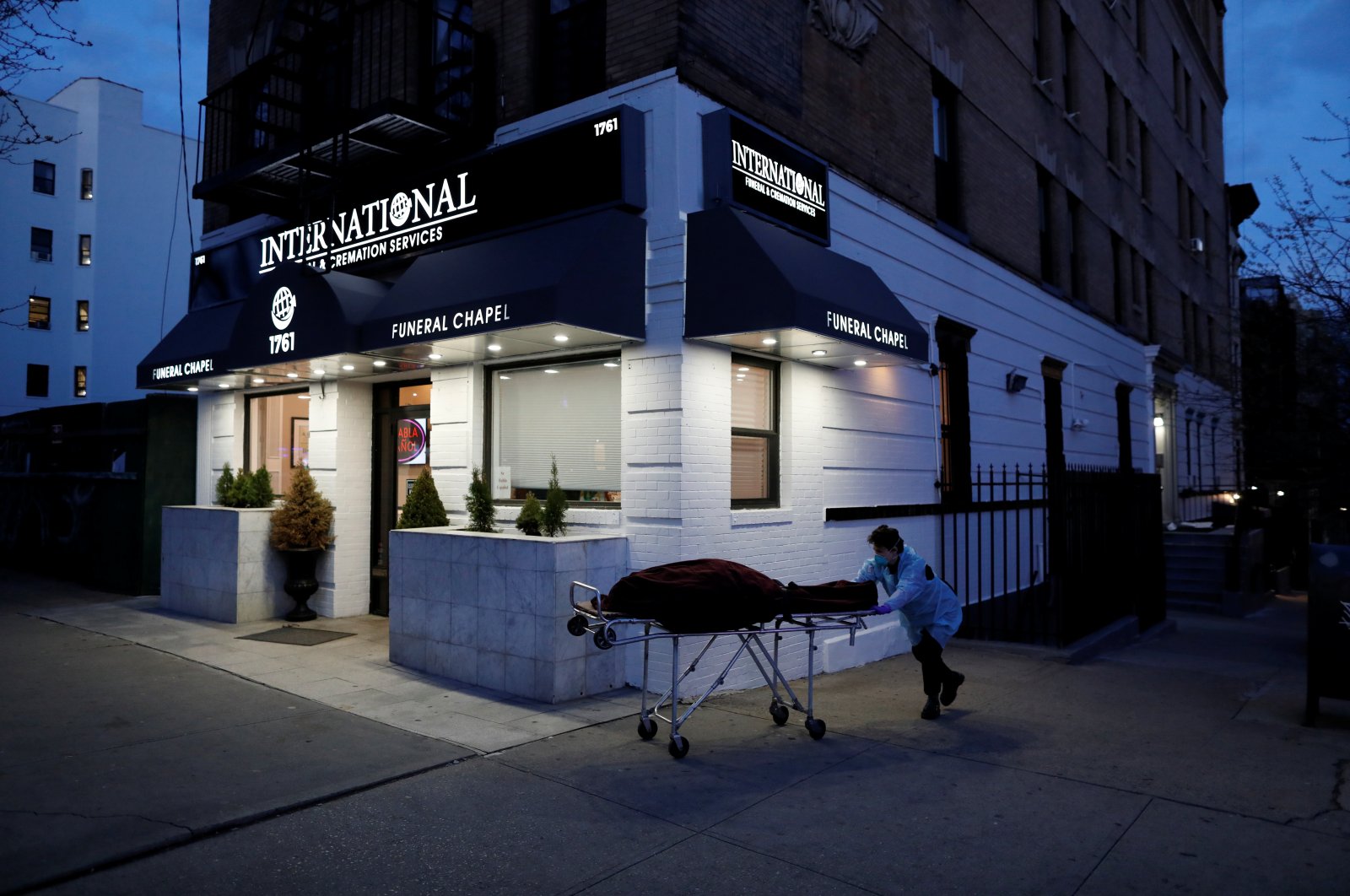 Lily Sage Weinrieb, 25, a Resident Funeral Director at International Funeral & Cremation Services, a funeral home in Harlem, wheels a deceased person to be prepared for a viewing service the following day, into the funeral home where she works, during the coronavirus disease (COVID-19) outbreak, in Manhattan,New York, U.S., April 16, 2020. (Reuters Photo)
by Agencies Apr 21, 2020 1:58 pm
RECOMMENDED

The coronavirus pandemic has killed more than 170,000 people globally, close to two-thirds of them in hardest-hit Europe, according to an Agence France-Presse (AFP) tally Tuesday at 0935 GMT.

There are 2,483,086 recorded cases around the world, though the number of actual infections is believed to be higher since many countries are only testing the most serious cases.

Official statistics showed that at least 1,500 more people with the new coronavirus have died in Britain than the 16,500 deaths that have been announced by the government.

The Office for National Statistics said that 1,043 deaths in nursing homes in England and Wales up to April 10 involved COVID-19, with 826 of those deaths recorded in the final week of that period. More than 500 other people died in hospices and private homes.

Those are not included in the United Kingdom government’s daily total, which only includes deaths in hospitals.

The figures show that the total number of deaths in the week ending on April 10 – 18,516 – was the highest weekly total in 20 years. About a third of all deaths involved the coronavirus.

The British government is under pressure to include nursing-home deaths in its daily coronavirus figures amid fears the number is being underreported.

Liz Kendall, a social care spokeswoman for the opposition Labour Party, said "these awful figures are only scratching the surface of the emerging crisis in social care, because they are already 11 days out of date.”

New deaths attributed to the new coronavirus in Spain are slightly up again on Tuesday, with 430 fatalities that bring the total death toll to 21,282 from a four-week low of 399 daily deaths on Monday.

Spain reported nearly 4,000 new infections to a total of 204,178, a 2% day-to-day increase in line with the average for the past four days, health ministry data showed.

The government is assessing already how to roll back one of Europe’s strictest lockdowns, starting from next Monday by allowing children to go out onto the streets for brief periods. Spain’s center-left Cabinet is discussing details on how the measure will be implemented during Tuesday’s weekly meeting.

An eight-week survey of 30,000 households that will be tested for the new virus is also expected to roll out on April 27, allowing authorities to gauge what’s the level of immunization beyond hospitals and nursing homes, where testing has been focused during the peak of the pandemic.

Authorities are also deciding on Monday on price caps for face masks, gloves, hand sanitizers and other protective equipment that has been in short supply.

According to a government special order issued on Sunday, the aim of controlling prices is for citizens to access in "non-abusive” economic conditions the material that experts see as key to controlling future contagion.

Russia recorded 5,642 new coronavirus cases in the past 24 hours, bringing its nationwide tally to 52,763, the Russian coronavirus crisis response center said in a report Tuesday.

"Over the past 24 hours Russia confirmed 5,642 coronavirus infections in 78 regions, including 2,567 people (45.5%) who were detected without symptoms,” the report said.

Singapore has announced it would extend its lockdown by another four weeks after a sharp upsurge in cases in recent days.

The city-state reported 1,111 new cases earlier Tuesday to take its total to 9,125, the highest in Southeast Asia.

Prime Minister Lee Hsien Loong said most of the new cases were due to aggressive testing of workers in the dorms, including those who are asymptomatic. Lee said in a televised speech that the clusters in the dorms have remained largely contained but circuit-breaker measures, that shut down nonessential businesses and schools until May 4, will be prolonged till June 1 until infections ease.

Lee said the government would shut more workplaces so that only the most essential services will stay open. Lee said the "short-term pain” is crucial to stamping out the virus, and pledged to provide further help for businesses and workers.

Denmark announced that any person in the country who has been or will be hospitalized for more than one day with or without COVID-19 symptoms, and staff and residents at retirement homes and facilities for people with mental health issues, will be tested under new guidelines released Tuesday.

"In this situation, it is very important that there is increased awareness to avoid infection in the population,” the Danish Health Authority said, saying "the spread of infection has been greatly reduced, and we have therefore started to open up the society gradually.”

Czechia's health minister Adam Vojtech said some 27,000 people across the country will be tested in the next two weeks, starting on Thursday.

The origin of the new coronavirus that continues to swipe lives across the world remains open to debate.

The World Health Organization (WHO) said Tuesday that all available evidence suggests that the novel coronavirus originated in bats in China late last year and it was not manipulated or constructed in a laboratory.

U.S. President Donald Trump said last week that his government was trying to determine whether the virus emanated from a lab in Wuhan in central China.

"All available evidence suggests the virus has an animal origin and is not manipulated or constructed virus in a lab or somewhere else,” WHO spokeswoman Fadela Chaib told a Geneva news briefing.

"It is probable, likely that the virus is of animal origin," Chaib said.

It was not clear how the virus had jumped the species barrier to humans but there had "certainly" been an intermediate animal host, she added.