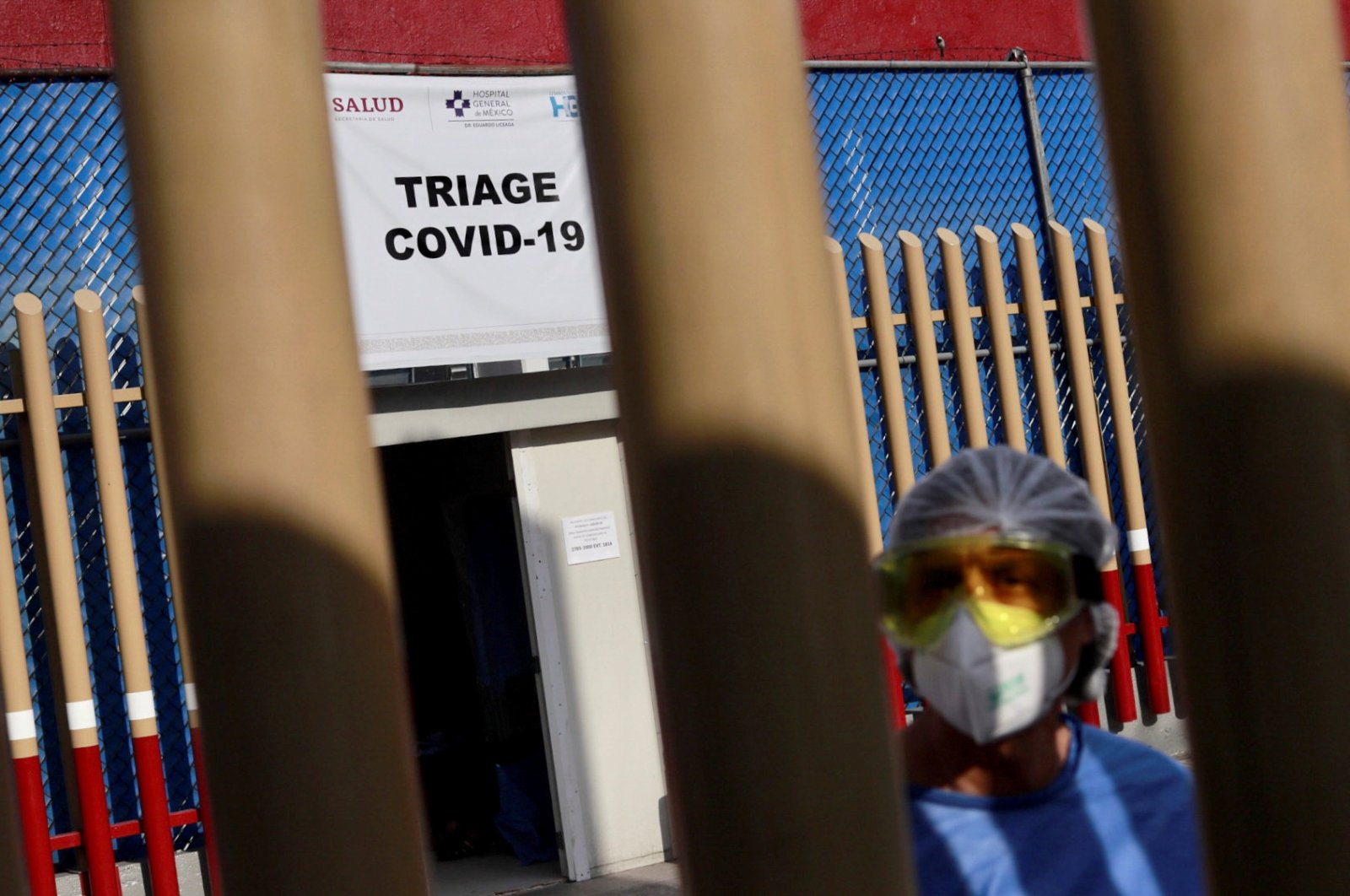 A health worker stands by the entrance of the triage for patients with COVID-19 as the outbreak continues in Mexico City, Mexico, May 4 2020. (Reuters Photo)
by Agencies May 05, 2020 12:41 pm
RECOMMENDED

Global coronavirus deaths rose past a quarter of a million on Monday after infections topped 3.5 million even as several countries began easing lockdowns designed to contain the pandemic.

North America and European countries accounted for most of the new deaths and cases reported in recent days, but numbers were rising from smaller bases in Latin America, Africa and Russia.

Globally, there were 3,914 new deaths and 75,646 new cases over the past 24 hours, taking total deaths to 250,152 and cases to 3.59 million. At least 1.1 million people have recovered from the illness, according to available official data.

That easily exceeds the estimated 140,000 deaths worldwide from measles in 2018, and compares with around 3 million to 5 million cases of severe illness caused each year by seasonal influenza, according to the World Health Organization (WHO).

While the current trajectory of COVID-19 falls far short of the 1918 Spanish flu, which infected an estimated 500 million people, killing at least 10% of patients, experts worry the available data is underplaying the true impact of the pandemic.

"We could easily have a second or a third wave because a lot of places aren't immune," Peter Collignon, an infectious diseases physician and microbiologist at Canberra Hospital, told Reuters. The world was well short of herd immunity, which requires around 60% of the population to have recovered from the disease, he noted.

The first death linked to COVID-19 was reported on Jan. 10 in Wuhan, China, after the coronavirus first emerged there in December. The number of deaths reported in a single day hit a peak of 10,229 just a week ago on April 29. The rate of the daily increase in deaths has slowed to 1-2% in recent days from a high of 14% on March 21.

Belgium has the highest fatality rate at 16% among countries with major outbreaks. At the other end of the spectrum, Australia and New Zealand are at 1%. Britain is at 15%, Italy is at 14% and the United States is at 6%, In Africa, Algeria has a 10% fatality rate.

Collignon said any country with a mortality rate of more than 2% almost certainly had underreported case numbers, with countries overwhelmed by the outbreak less likely to conduct testing in the community and record deaths outside of hospitals.

Health experts are watching closely as several countries tentatively ease restrictions on movement in a bid to revive global economies, amid fears of recurring infections.

In the United States, which has the world's highest total of infections and deaths, at almost 1.2 million and 68,000 respectively, at least half of the 51 states are moving forward with plans to reopen stricken businesses.

The loosening of lockdowns, however, led the University of Washington on Monday to up its forecast of deaths from COVID-19 to nearly 135,000 through the start of August, almost double the last prediction.

Italy, among the world's hardest-hit countries, allowed about 4.5 million people to return to work on Monday after nearly two months at home.

Australia and New Zealand, which have individually begun to lift restrictions, held talks on Tuesday about the possibility of a trans-Tasman "travel bubble," allowing residents to move between the two countries.

A special telethon backed by the WHO but snubbed by Washington pulled in $8.1 billion to support international efforts to develop a vaccine against the coronavirus.

Leaders of major European powers, Japan, and Canada made the biggest pledges, along with philanthropists including Bill and Melinda Gates.

"This was a powerful and inspiring demonstration of global solidarity," said WHO chief Tedros Adhanom Ghebreyesus.

Seeming to defend its non-participation, the U.S. State Department insisted the United States is "leading" the global response to the COVID-19 pandemic and said it has spent more than $1 billion together with U.S. drug companies to work on a vaccine.

As the country struggles to contain its outbreak, the White House has stepped up an offensive against China, with Secretary of State Mike Pompeo saying there is "enormous evidence" the virus emerged in a lab in the Chinese city of Wuhan.

That claim was rejected Monday by the WHO as well as top U.S. epidemiologist and government adviser Anthony Fauci.

"Everything about the stepwise evolution over time strongly indicates that (this virus) evolved in nature and then jumped species," he said.

His estimate underscored the tough, politically-tinged debate over reopening, which pits concerns about a rising death toll against the need to restore national economies shattered by prolonged shutdowns.

On Monday U.S. manufacturing giant General Electric announced it will cut an additional 10,000 jobs from its aviation sector as the pandemic decimates the industry.

The economic fallout in America prompted the U.S. Treasury to announce it will borrow a record $3 trillion in the April-June period, largely to finance spending on virus relief programs.

People across Europe basked in a return to the outdoors, mixed with a dose of trepidation about life ahead and the economic damage wreaked by lockdowns.

Workers banged away at construction sites in Rome, police handed out masks in Madrid, and older children returned to school in Vienna.

"We are all afraid," said a masked Cristina Jimenez, 31, in Madrid.

"Who hasn't lost their job already may lose it in the next few months," she added.

"But what is important is that we are well. With work, you can always find another."

Africa's biggest city, Lagos, got back to work at the end of a five-week virus shutdown, while in India police waded in to separate people jostling to buy alcohol for the first time in 40 days as the world's biggest lockdown eased.

New Delhi said it had also embarked on a "massive" operation involving naval ships and aircraft to bring back some of the hundreds of thousands of Indian nationals stuck in the Maldives and United Arab Emirates due to coronavirus restrictions.

And in a ray of hope for the sports world, South Korea's baseball players returned to action Tuesday in a new season, albeit to empty stadiums.

Friday will also see the delayed start of the country's football K-League, and next week some of golf's leading women players will tee up in a domestic tournament as South Korea becomes a rare hotspot for live sport.

Culture of a different kind was providing a balm for people in Washington, where French harmonica player Frédéric Yonnet is putting on regular two-hour concerts for free for people gathering outside his home in the U.S. capital.