Muslims resume protests despite Macron's attempts to redeem himself 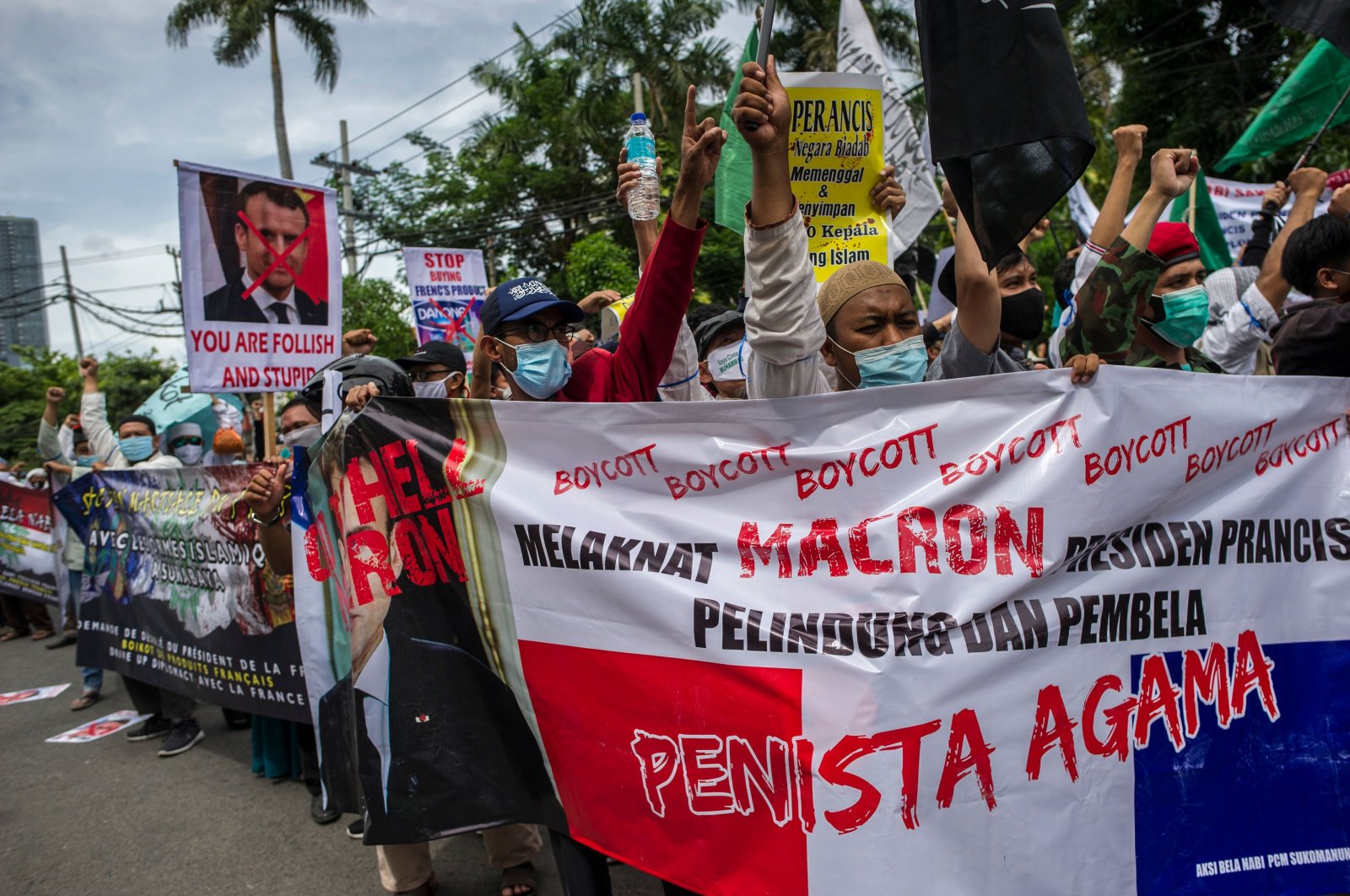 Despite efforts from French President Emmanuel Macron to redeem himself in the eyes of the Muslim world, protests are continuing in all corners of the globe, demanding more steps be taken to confront Islamophobia.

Tens of thousands of people gathered in Bangladesh's capital Dhaka on Monday to protest anti-Islamic acts in France, including the display of blasphemous caricatures.

The protesters gathered outside the Baitul Mukarram National Mosque chanting slogans against France.

The protest rally, organized by Hifazat-e-Islam, one of the largest Islamic non-political groups, marched on the city streets and headed toward the French Embassy in Dhaka. Security forces, however, barred the protesters from reaching the embassy.

Al Amin, a ninth-grade madrasa student in the Rampura area of capital Dhaka, joined the rally along with some of his fellow students to show his anger over the publication of caricatures in France insulting the Prophet Muhammad.

"I join the rally as I feel hurt over the publication of the caricatures ... We strongly denounce France's anti-Islamic actions based on hatred," he told Anadolu Agency (AA).

Junayed Babunagari, leader of Hefazat-e-Islam, urged businesses in Bangladesh not to buy and sell French products to counter the Islamophobic acts. He also urged the government to pass a "condemnation motion in parliament" and cut diplomatic ties with France.

Earlier on Sunday, the opposition Bangladesh Nationalist Party expressed solidarity with the ongoing protest, saying insulting any religious leader in the name of freedom of expression cannot be justified in any way.

The Bangladesh government, however, is yet to make any official comment over the matter.

Earlier last month, Macron described Islam as "a religion in crisis" and announced plans for tougher laws to tackle Islamic "separatism" in France.

French Muslims have accused him of trying to repress their religion and legitimizing Islamophobia.

Macron's attitude against Islam, the republication of caricatures insulting the Muslim Prophet Muhammad and their projection on the walls of buildings have triggered boycotts of French products in several countries, including Qatar, Kuwait, Algeria, Sudan, Palestine and Morocco.

Indonesian Muslims also marched to the heavily guarded French Embassy in the capital on Monday to protest Macron.

Waving white flags bearing the Islamic declaration of faith, more than 2,000 demonstrators, many wearing white Islamic robes, filled a major thoroughfare in downtown Jakarta. Authorities blocked streets leading to the embassy where more than 1,000 police and soldiers were deployed in and around the building barricaded with razor wire.

The protesters chanted “God is Great” and “Boycott French products” as they marched. Their banners and placards slammed Macron, and some protesters stomped on posters of the president in the blocked streets, while others voiced their anger by burning portraits of Macron.

Smaller protests also occurred in other Indonesian cities, including in Surabaya, Makassar, Medan and Bandung.

On Saturday, Indonesian President Joko Widodo strongly condemned the terrorist attacks in Paris and Nice as well as remarks by Macron that were deemed offensive toward Islam and Muslims.

At a national memorial for a teacher who was beheaded near Paris last month, Macron said the teacher “was the victim of a conspiracy of stupidity, hate, lies ... hate of the other ... hate of what we profoundly are.”

Widodo said freedom of expression that tarnishes the honor, sanctity and sacredness of religious values and symbols could not be justified and must be stopped.

“Linking religion with terrorist acts is a big mistake,” Widodo said. “Terrorism is terrorism, terrorists are terrorists, terrorism has nothing to do with any religion.”

The teacher, Samuel Paty, was attacked outside his school on Oct. 16 by a teenage Chechen for showing the caricatures to students. The attacker was later shot dead by police.

Macron has been accused of spreading anti-Muslim sentiment while eulogizing the teacher.

Protest organizer Slamet Ma’arif told the crowd, including members of the Islamic Defenders Front vigilante group, that Macron was being aggressively hostile to Islam and called for a boycott on French products.

“It hurt us deeply, and we demanded him to retract his words and apologize to the Muslim communities all over the world," he said from a truck modified with loudspeakers.

The French Embassy said Macron made a distinction between Islam and militancy.

“President Emmanuel Macron made it clear that there was no intention at all to generalize and clearly distinguished between the majority of French Muslims and the militant, separatist minority that is hostile to the values of the French Republic,” the embassy’s statement said.

Macron said he respects Muslims' feelings but will always defend freedom of speech and expression.

A renowned Muslim scholar said on Sunday that the French president's recent remarks are a "step toward moderation" but not enough to remedy his earlier statements.

"We expect from him the courage to openly apologize to our beloved, the greatest Messenger Muhammad and to all Muslims," Ali al-Qaradaghi, the secretary-general of the International Union for Muslim Scholars, tweeted.

The Muslim scholar called on Macron to initiate "constructive" and "serious" dialogue and to enact laws that prohibit and criminalize "insult and contempt against Islam and religious sanctities."