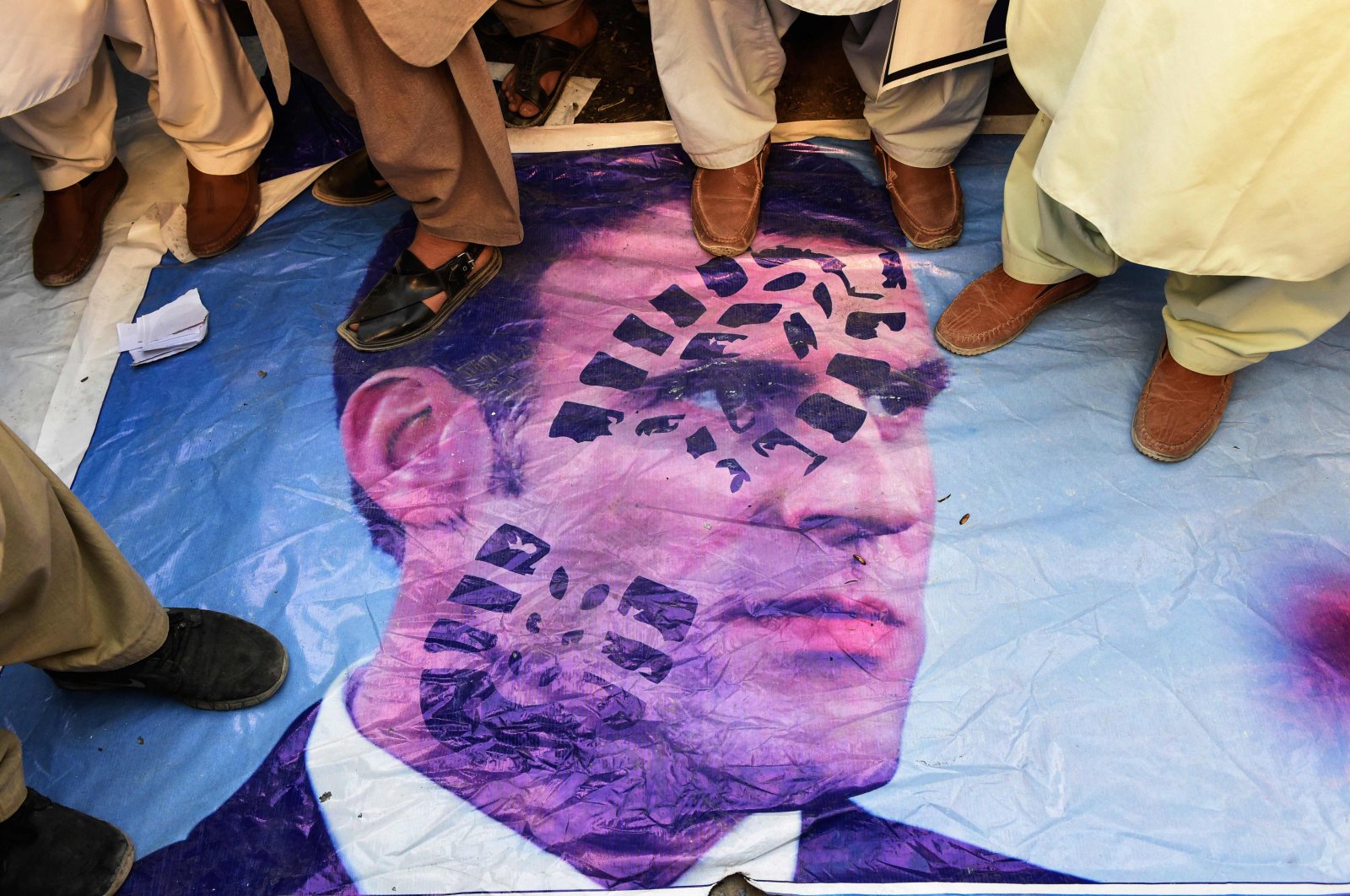 Muslim demonstrators stand on a poster of French President Emmanuel Macron during a protest against Macron's comments over the Prophet Muhammad caricatures, in Quetta, Pakistan, Oct. 28, 2020. (AFP)
by DAILY SABAH WITH AGENCIES
Oct 29, 2020 12:33 pm

Miguel Angel Moratinos, the United Nations High Representative for the Alliance of Civilizations, called for the mutual respect of all religions and beliefs Wednesday and for fostering a culture of fraternity and peace.

In a statement, Moratinos said he is following with deep concern the growing tensions and instances of intolerance triggered by French weekly magazine Charlie Hebdo's publication of satirical caricatures depicting the Prophet Muhammad.

"The inflammatory caricatures have also provoked acts of violence against innocent civilians, who were attacked for their sheer religion, belief or ethnicity," Moratinos noted.

He underlined that insulting religions and sacred religious symbols provokes hatred and violent extremism, leading to the polarization and fragmentation of society.

Freedom of expression should be exercised in a way that fully respects the religious beliefs and tenets of all religions, he said.

"Acts of violence cannot and should not be associated with any religion, nationality, civilization or ethnic group."

Macron last week said he won’t prevent the publication of cartoons insulting the Prophet Muhammad under the pretext of freedom of expression, a statement that sparked outrage in the Arab and Muslim world.

France recently launched an extensive witch hunt against the Muslim community following Macron's remarks characterizing Islam as a problematic religion that needs to be contained.

Many nongovernmental organizations (NGOs) and mosques have been shut down in the last two weeks while assaults against Muslims have spiked. Macron this month also described Islam as a religion “in crisis” worldwide and said the government would present a bill in December to strengthen a 1905 law that officially separated church and state in France.

He announced stricter oversight on schooling and better control over foreign funding of mosques. The debate over the role of Islam in France reached new intensity after the beheading of teacher Samuel Paty, which prosecutors say was carried out by an 18-year-old Chechen who had contact with a terrorist in Syria.

Macron's remarks sparked huge controversy and a boycott of French goods, including dairy products and cosmetics, by multiple Muslim countries including Qatar, Jordan, Kuwait, Iran, Turkey and Pakistan. Demonstrations have also taken place with posters of Macron set alight in some instances. Probably the harshest reaction, however, has come from Turkey.

“The person in charge of France has lost his way. He goes on about Erdoğan all day. Look at yourself first and where you are going. I said in Kayseri yesterday, he is a case, and he really must get a check-up,” Erdoğan said on Sunday. The president initially said Saturday that Macron needs “mental treatment” because of his hostility toward Islam. “What is Macron’s problem with Islam and Muslims? He needs mental health treatment,” Erdoğan said at the ruling Justice and Development Party (AK Party) congress.

In the latest move, Turkey summoned the French charge d'affaires on Wednesday over caricatures published in the Charlie Hebdo satirical magazine, a statement by the Turkish Foreign Ministry said.

According to information from bureaucratic sources, the diplomat was summoned to the Ministry of Foreign Affairs as Turkey “strongly condemned” the derogatory cartoon that purportedly depicted Erdoğan.

"Charlie Hebdo just published a series of so-called cartoons full of despicable images purportedly of our President. We condemn this most disgusting effort by this publication to spread its cultural racism and hatred," Turkey's Communications Director Fahrettin Altun previously said on Twitter.

While underscoring Turkey's position of being opposed to any violence and acts of terrorism against civilians, he said, "We will not remain silent in the face of disgusting attacks on our culture and religion no matter where it comes from."

Charlie Hebdo, a left-wing French satirical magazine infamous for publishing anti-Islamic caricatures, has drawn widespread anger and outrage across the Muslim world. Earlier this year, it republished cartoons insulting Islam and the Prophet Muhammad. The caricatures were first published in 2006 by the Danish newspaper Jyllands-Posten, sparking a wave of protests.

Meanwhile, while Turkey's rift with France continues, reactions are coming in from around the world against the cartoons. Azerbaijan's presidential aide Hikmet Hajiyev said on Wednesday that it is unacceptable that Charlie Hebdo targets Erdoğan.

"We strongly condemn this move," he expressed, adding that the magazine, through its provocative publishing, insults Muslims' values.

"The magazine uses the freedom of press and speech in the worst way possible through its Islamophobic actions," Hajiyev continued.

The street protests also continued elsewhere, as a convoy of 100 vehicles took place against Charlie Hebdo in Iraq's Kirkuk on Wednesday.

Celebrating Mawlid an-Nabi (the day marking the birth of the Prophet Muhammad), people who attended the convoy held banners that read "Our leader Prophet Mohammed."

Lebanon’s Prime Minister Saad Hariri on Thursday said insulting the Prophet Muhammad hurts the feelings of Muslims around the world.

“If the acts of murder and terrorism are a cause for denunciation, rejection and condemnation, then insulting the prophet is also an attack on the feelings of Muslims worldwide,” he said in a tweet.

Moderation is key to coexistence in Islam, the veteran politician named prime minister for the fourth time, added.

Somalia on Thursday also condemned Macron for his remarks against Islam and the Prophet Muhammad.

“The Federal Government of Somalia regrets the violation of the faith, sanctity and theology of the Muslim people, and our Prophet Muhammad, peace and blessings be upon him,” the Somali Presidency said in a statement.

“Any act that harms the feelings of Muslims serves the interests of extremist groups, and such acts should be avoided as they create social hatred among people of different nations and religions,” it added.

Somalia urged world leaders to carefully consider statements that violate the sentiments of Muslims by distinguishing between freedom of expression and violation of religious sanctity.

On Wednesday, hundreds of people in the Somali capital Mogadishu protested against the French president’s controversial remarks.

The largest protest so far, however, took place in Dhaka. Around 10,000 people in Bangladesh rallied in the South Asian nation's capital on Tuesday to protest France's president and his staunch support of secular laws that deem caricatures depicting the Prophet Muhammad as acceptable.

Thousands of demonstrators carried banners and placards reading "all Muslims of the world, unite" and "Boycott France" as they launched a march toward the French Embassy in Dhaka to let their reservations about the remarks be known and calling on people to boycott French products.