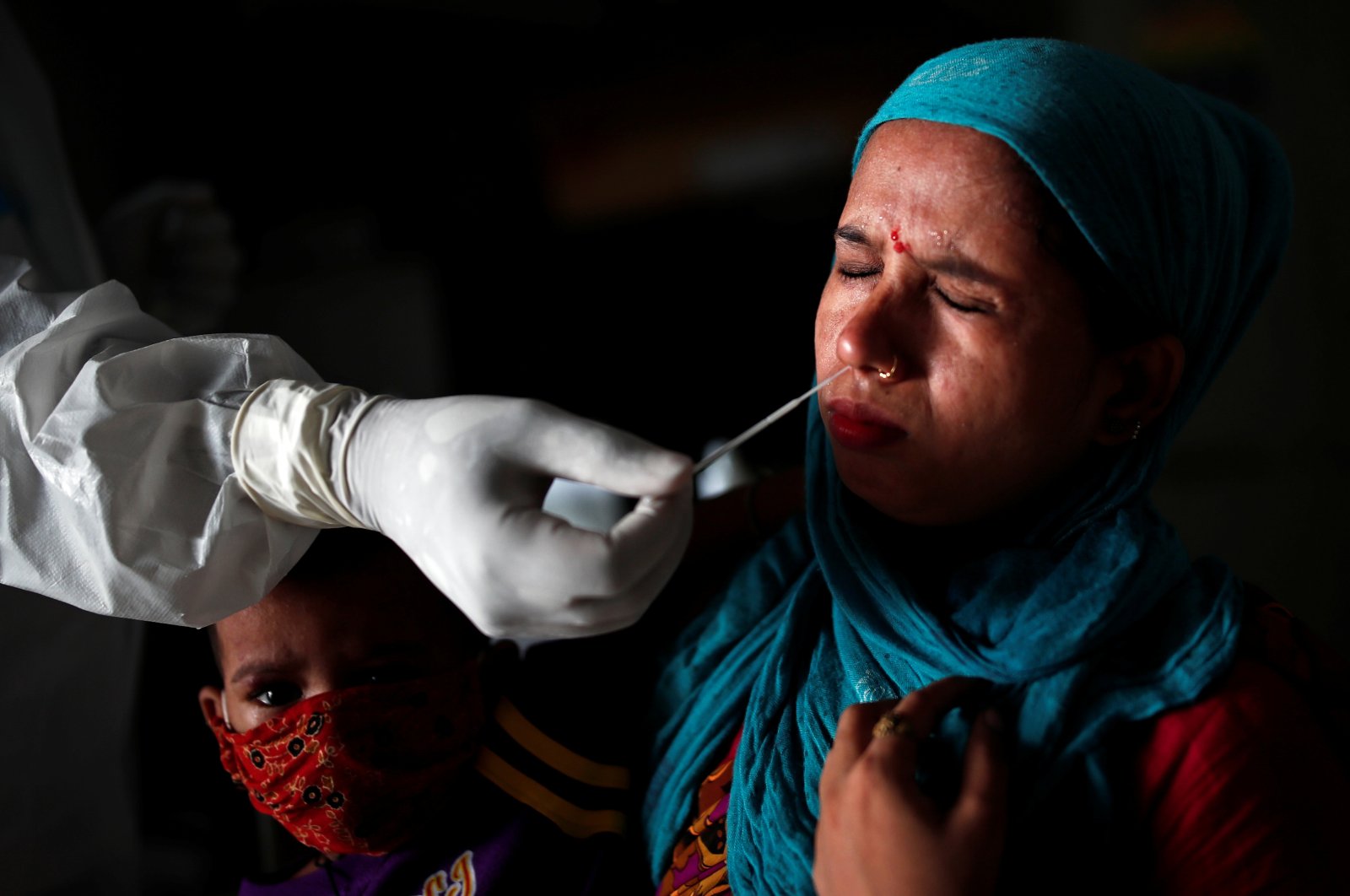 A medical health worker collects a sample from a woman using a swab, at a local health center to conduct tests for the coronavirus, in New Delhi, India, July 28, 2020. (Reuters Photo)
by Agencies Aug 23, 2020 12:21 pm

Two of the worst-hit countries, Italy and India, have recently recorded some sharp jumps in infections. Even the least-affected continent, Africa, has seen a troubling increase in cases

The coronavirus pandemic is continuing to take its toll on the globe as countries struck the hardest by the disease, such as Italy and India, continue to report large numbers of infections.

The country has seen a constant surge in new cases over the past few weeks, with scientists blaming holiday-goers coming back from high-risk destinations and large gatherings of people enjoying the nightlife at the peak of the summer season.

Italy has been one of the worst-hit countries globally – with more than 35,400 fatalities – but has managed to contain the outbreak thanks to strict lockdown measures that the government started easing only in May.

Experts noted that, despite the rise in new infections, the daily number of deaths remains low. On Saturday, Italy registered just three new deaths, compared with nine a day before.

The higher infection numbers are also linked to an increase in tests performed daily, which is much higher than in the early stages of the outbreak.

On Saturday, the Lazio region – which includes Rome – registered the largest number of new cases, at 215. According to health authorities, around 60% of these may be related to people returning from vacation in Italy or abroad.

Italian authorities have been tightening restrictions again since mid-August amid the surge from a daily case number averages of 200-300 to around 600. The rise has since become exponential.

Scientists are now worried that a second wave of contagion could be sparked by the reopening of schools in mid-September.

India is ranked third behind Brazil and the United States in the highest number of cases.

Another 912 people died, taking the total death toll to 56,706, data on the ministry website showed.

India confirmed the last million cases in just 16 days, and the previous million in 21 days, faster than the U.S. or Brazil.

It touched its first million cases on July 17, around 140 days after reporting its first case at the end of January. The rate of infections has grown exponentially since India began lifting its lockdown in phases from mid-May.

India has been generating the highest number of daily new cases in the world for the last 18 days, domestic media reported, with over 50,000 fresh cases every day. Health care workers and testing centers in several regions are overburdened.

"India is in a better position than the rest of the world. India probably has the world's best recovery rate of 75% and lowest fatality rate at 1.87%," health minister Harsh Vardhan told reporters Saturday.

"Health experts from India and abroad had forecast India to have 300 million cases and up to 6 million deaths by July-August. The figures are before you, it's getting to be the end of August and we are reaching 3 million cases now. Two-point-two million patients have recovered, and another 700,000 are going to be cured very soon," he said.

He added that India had ramped up testing – it was now conducting over 1 million tests every day and a total of 30.5 million samples had been tested so far.

Cases have plateaued in some major cities including national capital New Delhi and the financial hub of Mumbai after antibody surveys showed millions of residents could have contracted infections while being asymptomatic.

Several states have announced fresh restrictions amid a spike in cases. While Haryana Friday announced the weekend lockdown, another northern state, Punjab ordered a daily night curfew in addition to a weekend lockdown.

Celebrations for an 11-day Hindu festival, Ganesh Chaturthi, have been scaled down across the country amid the outbreak.

Worldwide, the death toll has surpassed 800,000 with 23.2 million people being affected, according to Johns Hopkins University.

The country has seen a sharp jump in infections over the previous 10 days, recording over 2,600 new cases, according to data from the Korea Centers for Disease Control and Prevention (KCDC).

The total number of infections now stands at 17,399 while 309 people have died from COVID-19, the disease caused by the virus.

Sunday's daily tally is the highest since March 7, when 483 cases were recorded.

Of the new cases, 387 were local transmissions, according to the KCDC.

On Saturday for the first time since the country's first case was confirmed in January, all 17 regions which the KCDC measures – either major cities or provinces – reported cases, causing concern about the breadth of the virus spread.

In the hard-hit capital city Seoul, 138 new cases were reported and a further 124 in the surrounding Gyeonggi province.

South Korea has seen sporadic clusters of infection since it relaxed stricter social distancing on May 6.

Several countries are working on a number of vaccines to fight the coronavirus9. Vardhan said India's first vaccine could be developed and available by the end of the year.

Leaders of Africa, the supposedly least-affected continent, expressed concern at more than 1 million cases of COVID-19 on the continent and greater than 26,000 fatalities, according to a statement Saturday by African Union Chairperson Cyril Ramaphosa.

The statement said heads of state and government held a teleconference meeting earlier this week to assess progress in the fight against COVID-19, including the mobilization of international economic support.

"They cautioned that the COVID-19 pandemic situation remains serious and urged Member States to exercise caution in the easing of restrictions on socio-economic activity,'' according to the statement.