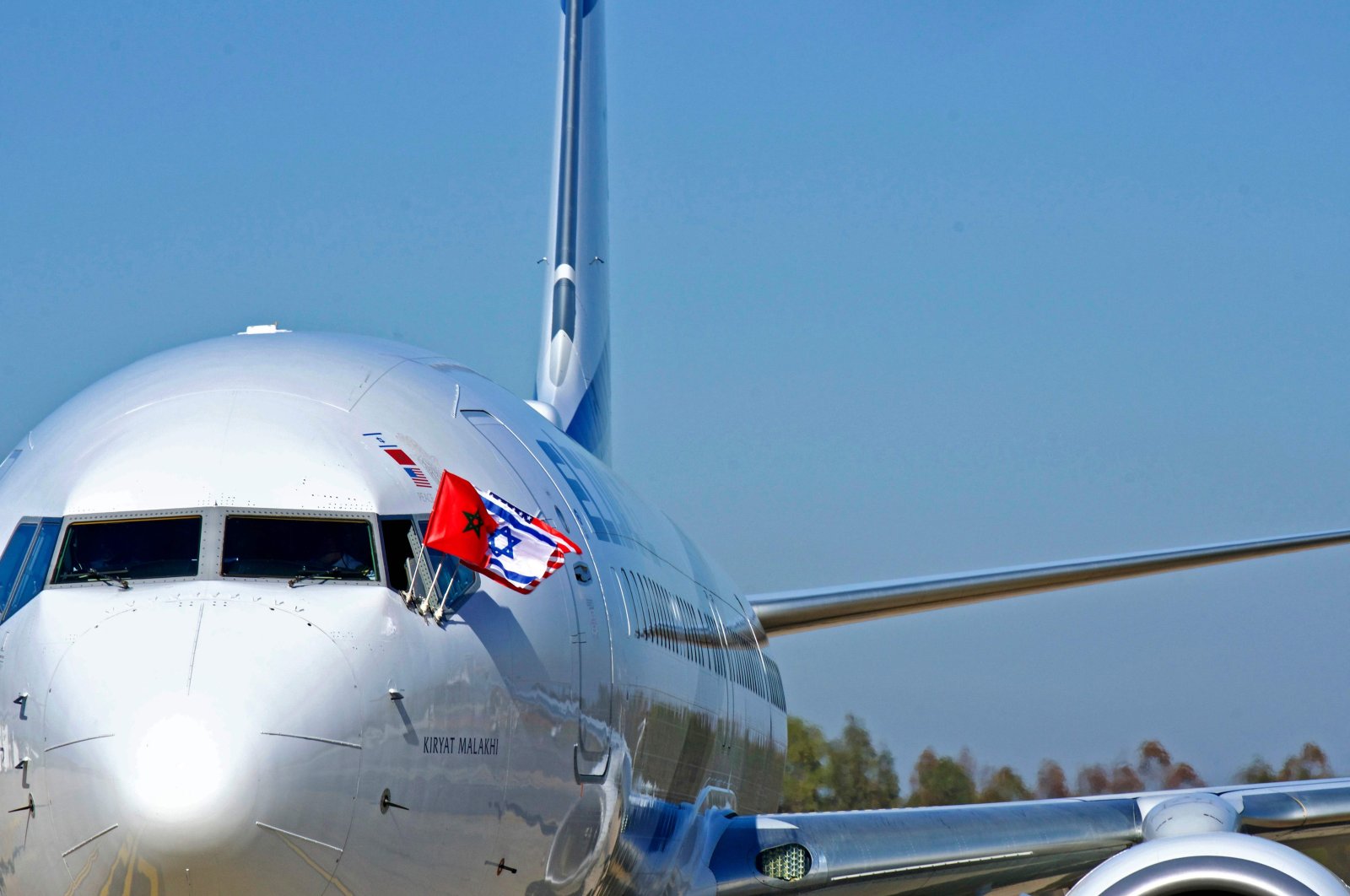 A handout picture released by the US Embassy in Morocco, shows US and Moroccan flags on an El Al airplane after landing in Rabat, Morocco, Dec. 22, 2020. (U.S. embassy in Morocco Photo via AFP)
by Agencies Dec 22, 2020 2:04 pm
RECOMMENDED

The first Israel-Morocco direct commercial flight landed in Rabat Tuesday to mark the latest U.S.-brokered normalization deal between the Jewish state and an Arab country.

The trip aims to showcase the achievements of the Trump administration in Middle East diplomacy, weeks before Trump is replaced at the White House by President-elect Joe Biden. Both sides expected to sign agreements paving the way for direct air links, to connect their financial systems and on a visa waver arrangement for diplomats, according to an Israeli official source.

Morocco became the third Arab state this year, after the United Arab Emirates (UAE) and Bahrain, to normalize ties with Israel under U.S.-brokered deals, while Sudan has pledged to follow suit.

Speaking at Israel's Ben Gurion Airport before departure, Kushner stressed that the UAE-Israel deal had already created commercial opportunities for both countries.

"My hope is that this flight today to Morocco will create the same amount of momentum," between Morocco and Israel, he said before getting on the plane painted with the Hebrew, Arabic and English words for "peace."

As part of the Morocco-Israel deal, Trump fulfilled a decades-old goal of Morocco by backing its contested sovereignty in Western Sahara.

The move infuriated the Algerian-backed Polisario Front, which controls about one-fifth of the desert territory that was once a Spanish colony. Negotiations leading to Morocco's resumption of ties with Israel included pledges to open a U.S. consulate in Western Sahara, and for U.S. investment which Moroccan media described as "colossal."

At the same time, Israel and Morocco are due to reopen diplomatic offices and activate major economic cooperation. Morocco closed its liaison office in Tel Aviv in 2000, at the start of the second Palestinian intifada, or uprising. King Mohammed VI has said Morocco will remain an advocate for the Palestinians.

Meanwhile, both the Palestine Liberation Organization (PLO) and Hamas, which controls the Gaza Strip, condemned the deal, just as they did with the earlier Israeli normalization accords with the UAE, Bahrain and Sudan.

"Any Arab retreat from the (2002) Arab peace initiative, which stipulates that normalization comes only after Israel ends its occupation of Palestinian and Arab lands, is unacceptable and increases Israel’s belligerence and its denial of the Palestinian people's rights," Bassam al-Salhe, a member of the PLO's Executive Committee, told Reuters.

Morocco has sought to temper the anger by insisting that relations with Israel are not new.

"The new agreement is merely the formalization of a de facto partnership between Morocco and Israel dating back 60 years," said Moroccan media boss Ahmed Charai, as Agence France-Presse (AFP) reported.

Writing in the Jerusalem Post, he has pointed to a "shared history," adding that he was "overcome with pride and gratitude" when the deal was announced.

"The two states have assisted each other vitally for decades," Charai wrote, pointing to security cooperation that helped Israel in the 1967 Six-Day War and "quiet Moroccan diplomacy" that helped foster peace between Egypt and Israel.

Morocco is home to North Africa's largest Jewish community, which dates back to ancient times and grew with the arrival of Jews expelled from Spain by Catholic kings from 1492.

Although bilateral ties were suspended in 2000, trade has continued and amounted to $149 million between 2014 and 2017, according to Moroccan newspapers.

Kushner said Israel's recent string of normalization deals marked a step towards a more "normal" co-existence between Jews and Muslims.

"The state we have lived in for the last 75 years, where Jews and Muslims have been separated, is not a natural state," he said before the flight.

"For hundreds and thousands of years Jews and Muslims in this region have been living and being together, and I think that what we have seen now is a restoration of that norm."